Early childhood is the term given to the stage that begins at infancy and lasts till the age of six (Chaloux, 2014). This time period is one of learning, development and growth – and is referred to by some educational psychologists as the “preschool” years.

An infant’s brain begins to grow during the third month of their life (Yunus, Razali, & Jantan, 2011). According to Yunus, Razali and Jantan (2011), at this stage, the baby or the infant begins to understand certain words.

Get a verified writer to help you with Stages of Human Development: Early Childhood

Similarly, Chaloux (2014) states that “babies are born ready to learn language”, and will be listening to the sounds they hear from the very beginning. And thus, they begin to identify the words most commonly used around them, or within their earshot. However, the infant child will not be able to articulate words – even though they recognize them – until the age of about 18 months (Yunus, Razali, & Jantan, 2011). At this age, he or she will respond to their name, and say a few easy words of his own and follow simple instructions (Chaloux, 2014).

By the age of two years, they will be able to articulate more than fifty words and will have started to chain some of those words together into simple sentences (Chaloux, 2014). At this point, the child will also be able to use word symbolically (Yunus, Razali, & Jantan, 2011). According to Yunus, Razali and Jantan (2011) when children reach the age of five or six years, “their eyes are ready to read, and their brain are ready to store many words”.

At this stage their vocabulary expands by leaps and bounds and they become increasingly more fluent in speech – especially in their native language. Thus, we can state that language and its acquisition is a powerful enhancement tool when it comes to a child’s cognitive development.

At infancy, children consistently demonstrate a natural curiosity to learn more about their environment. It is this curiosity that prompts the unconscious learning process that infants and toddlers undergo (Yunus, Razali, & Jantan, 2011). For instance, as an infant they will crawl towards whichever object in their line of sight interests them the most. They will touch, feel, push, pull, shake and throw objects around in order to explore their environment (Chaloux, 2014). As toddlers this curiosity shows itself in their frequent asking of “Why?”

According to Chaloux (2014), children develop the ability to understand simple concepts as a toddler. At this stage, they are able to recognize similarities as well as differences between objects – for example a toddler is capable of grouping objects or toys based on color or shape. According to HealthyChildren.org (as cited in Chaloux, 2014), at three years old, a child is able to name colors and begins to comprehend the concept of counting. They are also aware of gender differences and understand that male and female bodies are different (Yunus, Razali, & Jantan, 2011). By the time a child is six – and nearly at the end of the Early

Childhood stage – they are capable of doing the following:

2. Use symbolism to represent various environmental aspects (using the word “toy” to represent their own, very real toy even in its absence)

At the Early Childhood stage, children also undergo the sensori-motor stage and venture into the preoperational stage of Piaget’s theory of cognitive development (McLeod, 2012). The sensori-motor stage stretches from birth to two years and according to McLeod (2012), this stage is “centered on the infant trying to make sense of the world… Children utilize skills and abilities they were born with (such as looking, sucking, grasping and listening) to learn more about the environment.” The preoperational stage lasts from the age of two to seven years. “Piaget noted that children in this stage do not yet understand concrete logic cannot mentally manipulate information, and are unable to take the point of view of other people, which he termed egocentrism.” (Cherry, Piaget’s Stages of Cognitive Development, 2014).

Erikson’s psychosocial development theory states that infants “develop feelings of trust versus mistrust” in the period between birth and the age of one year (Yunus, Razali, & Jantan, 2011). This is, according to Erikson’s theory, the most fundamental stage in a human being’s life (Cherry, Erikson’s Theory of Psychosocial Development, 2014). Because an infant is utterly dependent, the development of trust is based on the dependability and quality of the child’s caregivers. If a child successfully develops trust, he or she will feel safe and secure in the world. Caregivers who are inconsistent, emotionally unavailable, or rejecting contribute to feelings of mistrust in the children they care for. Failure to develop trust will result in fear and a belief that the world is inconsistent and unpredictable.

Autonomy VS Shame and Doubt

The second stage of Erikson’s theory of psychosocial development takes place during early childhood and is focused on children developing a greater sense of personal control. Like Freud, Erikson believed that toilet training was a vital part of this process. However, Erikson’s reasoning was quite different than that of Freud’s. Erikson believe that learning to control one’s bodily functions leads to a feeling of control and a sense of independence. Other important events include gaining more control over food choices, toy preferences, and clothing selection. Children who successfully complete this stage feel secure and confident, while those who do not are left with a sense of inadequacy and self-doubt. Erikson believed that achieving a balance between autonomy and shame and doubt would lead to will, which is the belief that children can act with intention, within reason and limits.

During the preschool years, children begin to assert their power and control over the world through directing play and other social interactions. Children who are successful at this stage feel capable and able to lead others. Those who fail to acquire these skills are left with a sense of guilt, self-doubt, and lack of initiative. When an ideal balance of individual initiative and a willingness to work with others is achieved, the ego quality known as purpose emerges.

Early childhood is a time of tremendous growth across all areas of development. The dependent newborn grows into a young person who can take care of his or her own body and interact effectively with others. For these reasons, the primary developmental task of this stage is skill development. Physically, between birth and age three a child typically doubles in height and quadruples in weight. Bodily proportions also shift, so that the infant, whose head accounts for almost one-fourth of total body length, becomes a toddler with a more balanced, adult-like appearance.

Despite these rapid physical changes, the typical three-year-old has mastered many skills, including sitting, walking, toilet training, using a spoon, scribbling, and sufficient hand-eye coordination to catch and throw a ball. Between three and five years of age, children continue to grow rapidly and begin to develop fine-motor skills. By age five most children demonstrate fairly good control of pencils, crayons, and scissors. Gross motor accomplishments may include the ability to skip and balance on one foot. Physical growth slows down between five and eight years of age, while body proportions and motor skills become more refined.

Get a verified writer to help you with Stages of Human Development: Early Childhood 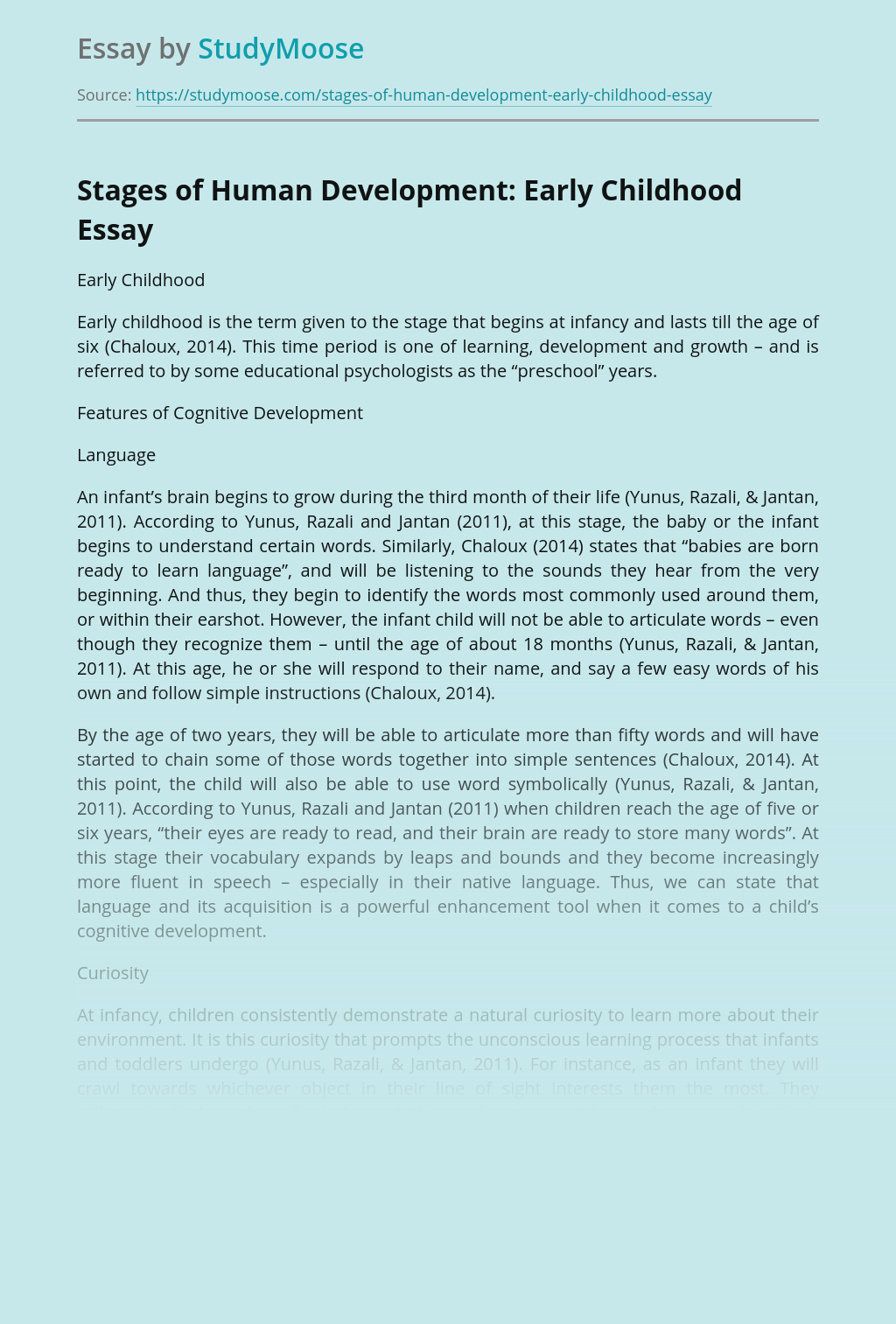 Development of Children and Youth

What Parents Should Remember about Child Development

Child Development A child’s development is the process of growth of a child to teenage years, from dependency to increase independence. The early years of a child’s life is essential for cognitive, social and emotional developments (Leo 3). Therefore, it is important that parents take every step necessary to ensure that children grow up in...

Growth and development:In humans, growth is the process of increasing in size; weight and height (mostly a physical change), Growth takes time and it doesn’t happen all of a sudden, people don’t reach their full height until early adulthood. Whereas development means the process of developing progressive acquisition of skills and abilities which often lead...