Stella loves Stanley, but in a way that she wants, and desires him rather than she feels affection and passionate love for him: Stella (to Blanche): “There are things that happen between a man and a woman in the dark – that sort of make everything else seem unimportant. (Pause. ) Blanche: “What you are talking about is brutal desire – just – Desire! Stanley is a perfect example of an alpha male. He is confident in the way he moves and the way he acts, a man in the prime of his life.

Don't use plagiarized sources. Get your custom essay on
“ Stage direction ”
Get custom paper
NEW! smart matching with writer

This is how he is described in the stage directions: “He is of medium height, about five feet eight or nine, and strongly, compactly built.

Animal joy in his being is implicit in all his movements and attitudes. ” – scene 1. It then goes on to say about how Stanley’s main pleasure in life has been women: Stage direction: “He sizes women up at a glance, with sexual classifications, crude images flashing into his mind and determining the way he smiles at them.

” – scene 1 Despite this, I believe that Stanley really does love Stella, and means it when he says he is sorry after he hits her, and believes he will never do it again. I think that the arrival of Blanche is what mainly builds up tension in Stanley: Blanche (to Stanley): “My, but you have an impressive judicial air!

” Stage direction: “She sprays herself with her atomizer; then playfully sprays him with it. He seizes the atomizer and slams it down on the dresser.

She throws her head back and laughs. ” – scene 2 Blanche makes fun of Stanley when he tries to be serious with her, and he takes this with offence, he is giving her a chance to explain herself, and she throws it back in his face. I think that much of “A Streetcar Named Desire,” and the characters in it are based on Tennessee Williams’ own background. Stanley is a reflection of his own father; he enjoys drink and travels a lot.

His mother was separated from her aristocratic upbringing when she married his father much like Stella and both his mother and his sister, Rose ended up in mental homes, like Blanche does at the end of the play. In scene 3 Stanley holds a poker night with his friends, and the women come home before it has finished. Stanley is drunk and violent and ends up hitting Stella. Blanche takes Stella to the apartment above them, where she will be safe, but Stanley immediately comes looking for her, and appears very sorry and ashamed of himself. In the end she goes back to Stanley.

Also, in this scene Blanche meets Stanley’s friend, Mitch, of whom she takes a liking too. He comforts her when she is worried about Stella going home. In scene 4 it is the following morning and Blanche is distraught, worrying about Stella, only to find that she is perfectly happy. Blanche is positive that she and her sister have to leave, for their own safety, but Stella insists that she is absolutely fine where she is. Blanche is incredulous, and is unable to withhold her true feelings about Stanley any longer. She speaks plainly to Stella, describing him as an animal, among other things.

Stanley overhears the entire conversation, and the scene finishes with him grinning menacingly at Blanche. The majority of scene 3 is connected to Stanley’s poker night. On page 31 the stage directions are used to set the scene, Tennessee Williams uses the word “vivid” on several occasions, relating to the boldness of the colours in the room. He describes the men seated round the poker table as “At the peak of their physical manhood, as course and direct and powerful as the primary colours. ” Williams is adamant that there are no wishy washy colours in the room, this sets a suitable scene for the sense of tension building.

The strong colours represent the strong characters, and with strong characters in such close proximity, surrounded by bold colour someone is bound to explode. In the scene before, set earlier that day, Stanley has an argument with Blanche, so it is predictable that when she and Stella arrive home he is not overly pleased to see them, and their coming back before he expected aggravates him. He even suggests that they go upstairs with Eunice, in attempt to get rid of them. Perhaps he knows that if they stay it is only going to build up tension within him, because as Mitch later says: “Poker shouldn’t be played in a house with women.

” And of course, dramatic tension does build up, and concludes with Stanley hitting Stella. In scene 3 Blanche meets Mitch, a poker-playing friend of Stanley’s: Blanche (about Mitch): “That one seems – superior to the others. Stella: “Yes, he is. ” Blanche: “I though he had a sort of sensitive look. ” – scene 3 Blanche feels connected to Mitch because he tells her that his girlfriend died, and Blanche’s husband died, so it gives them something in common. Blanche does not get on with Stanley, or any of his other friends particularly because they have such different backgrounds.

Blanche sees Mitch as superior because he looks sensitive, and this is because his mother is sick. Mitch is the only man of his crowd that is not married, so he feels loneliness in the same way Blanche does. His sensitivity also probably makes him stick out slightly in his crowd of “coarse” men, he doesn’t belong in the way that the others do, and this gives him another thing in common with Blanche. Together they share a conversation on death and loneliness: Mitch: ” The girl’s dead now. Blanche: (In a tone of sympathy) “Oh! ” Mitch: “She knew she was dying when she gave me this. A very strange girl, very sweet – very! 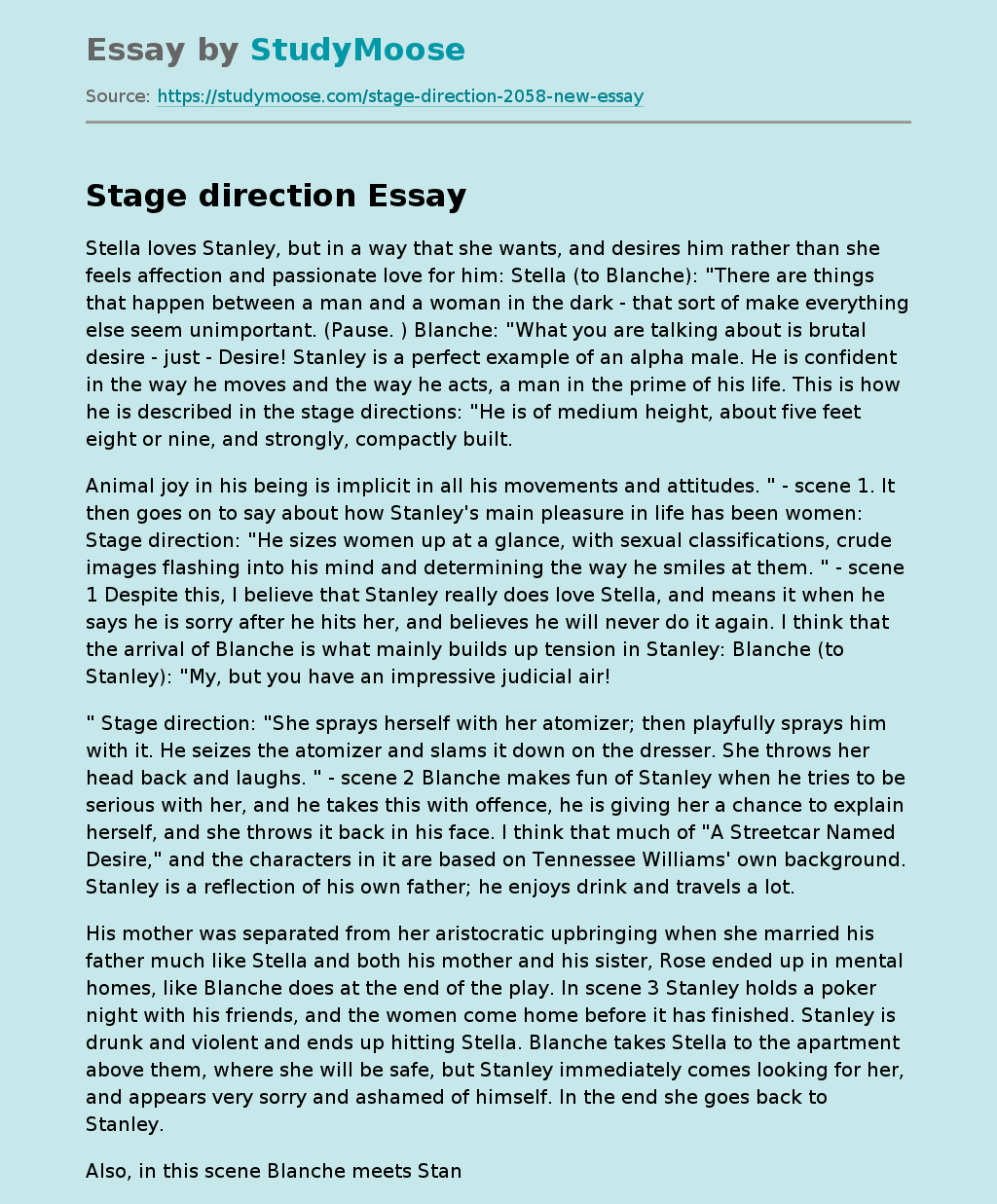