More than a writer, Sri Aurobindo is known as a mystic philosopher. He tried his hand at almost all literary genres and that too with finesse. So his reputation as one of the great Indian writers in English can’t be denied. His prose work “The Renaissance in India” is crown among his works. The four essays contain detailed discussion on subjects such as culture, religion, spirituality, education etc. It was first published in Arya from August to November 1918. He attempts to remove the misconception widespread in West about India’s nature of civilization.

Don't use plagiarized sources. Get your custom essay on
“ Sri Aurobindo’s Views on Spirituality and Religion ”
Get custom paper
NEW! smart matching with writer

Aurobindo complained that the spiritual side of India was over-stressed. Western scholars were all gung ho about it and Indians simply imitated them and shouted the same. Indians simply accepted that and expressed the same voice. However, they forgot that in other fields like philosophy, science, technology, logic we also made immense progress. However, we failed to show that side of India. It was not the case that west dominated singlehandedly in such subjects; and India in religion and spirituality.

The greatness of India was such that we made multi faceted progress that included subjects other than spirituality.

But due to misconception of Westerners and our ignorance about our own hidden treasure, the error continued. More than that, India imitated and followed the Westerners blindly in all but religion. As a result, there was no significant contribution by them. Then they came to know about their rich past. Sri Aurobindo here cites an example of Germany. The country was considered made up of dreamers, idealists, sentimentalists, docile, intelligent, but politically inept people.

Later it was discovered that it was a brutal mistake to think like that about Germany. The same misconception was also true about India but the realization of India’s real strength won’t be the result of destruction. The India will captain the world in terms of knowledge of science and literature.

Indian spirituality saw the power of human being’s capacity much before the western mind could think of. She knew that visible was always surrounded by invisible, finite by infinite. Human can have power that one can ever believe, that is to transcend the human limitation. The spiritual power of India wasn’t grown out of void but her psychic tendency, her creativeness, her vitality, her yoga, her religion and so on. We see the mountaintops. They aren’t created without base, in the dream under the cloud. The same way there is infinite strength of India builds up the powerful spirituality that enchants the world since the time unknown. In Aurobindo’s own words, to describe the worldwide influence of Indian spirituality over the earth,

“The fine superfluity of her wealth brimmed over to Judea and Egypt and Rome; her colonies spread her arts and epics and creeds in the Archipelago; her traces are found in the sands of Mesopotamia; her religion conquered China and Japan and spread westward as far as Palestine and Alexandria, and the figures of Upanishads and the sayings of the Buddhists are re-echoed on the lips of Christ.”

India is the land of Dharma and Shashtra. She worked laboriously to find the inner truth of human and created Shashtra. It wasn’t enough. She made Shashtra that was applicable to human life and helped us to live better. She witnessed three luminous periods in Indian history. First was of the exploration of Spirit, second was of Dharma and third, of Shashtra. From the age of Ashoka down to the Mohammaden epoch, she continued to produce intellectual property; it was as if the volcano of knowledge were bursting forth. We know there was no printing press or techniques to preserve such knowledge except easily perishable palm leaf and memory.

There was no parallel of such high intellectual activity in the world history, which can be compared to that of Indians. It is only recently that the dormant knowledge was found and put forward to the entire world to be benefited by them. What we see is only fraction of what is actually still there untouched, untapped! These works were not confined to theology, yoga, medicine only but all types of practical information from dance forms to how to breed horse. It encompassed all the subjects that were ever thought. Thus, it was fault to over stressed Indian spiritual progress and ignored its intellectual contribution. India has done well-balanced research in all areas.

The westerner and their Indian followers stressed the spiritual growth but it is only possible in ‘opulent vitality’. That, they forgot. Now that Western world has progressed in leaps and bounds in science, they are turning to spirituality. The same was the case with the ancient India. Sri Aurobindo says that India had the tendency to reach to the extreme, whether it’s spirituality or creativity. India’s spiritual progress was due to its excess in exuberance and energy. The west is passing through the same phase, there is excess of science and technology. So the people are concentrating their energy on the real cure of malady that is not physical but mental. Whether it is spirituality or intellectual creativity, India has tried to achieve its summit, where the knowledge ends and she stands on the peak to observe the whole truth or the spirit. Says Aurobindo,

“When it formulated a spiritual atheism, it followed that to the height of possible vision. When, too, it indulged in materialistic atheism it formulated it straight out, boldly and nakedly, without the least concession to idealism or ethicism.”

She, India created distinction only to remove it. There was high opulent living and extreme poverty. The later was never the ideal of India. It was only due to fear of disintegration during the period of her decline. Buddha, the prince voluntarily accepted the poverty to save her from disintegration. It was true that India had complex caste system but the distinction was to deny its very existence. They always looked at human beyond cast but a supreme soul with great capacity. Look the term they gave to Shudra, ‘Narayana’ means God-head. The monarchy ruled out the democracy but in monarchy, there lied the divinity of democracy.

One can follow the king religiously and could still question the ways of kings. There was a period in India’s history, which Aurobindo describes as spiritual anarchism. These two seemingly opposite terms signify the extreme of sensuous pleasure ‘anarchy’ and in it too India finds deep meaningful soul-searching ‘spirituality.’ It wasn’t like unbridled corrupt age of Europe. India could find rare harmony in the chaos. Even in the extremes, it thought of life lesson and application of it. So, it was great learning experience. That’s how we balanced the anarchy and spirituality to restore the stability and calmness.

Those who thought about Indian culture in West, what came to their mind was spirituality. It was not so as mentioned earlier. India had a multifaceted culture, which included art, philosophy, literature, technology etc. But it was only known to a few who took pain to dig dip the Indian past. At present, Aurobindo considers there is decline. But India will come out of it and India’s past will help it. The past, which has assumed many forms, in future will assume other different forms. Thus, there will be mingling of past, present, and future. In Indian renaissance, the creative spirit will rear its head again and play vital role in making India a great nation. We see that many great civilizations and cultures failed to stand at the test of time, but India is still strong even after many attacks. The reason behind it is India’s strength, its hero, that is spirituality. It never let the country die, die of its culture, opulent vitality.

The notable characteristic of Indian spirituality was that it never called the life on earth as illusion maya and ignored it. It gave equal attention to earthly life too as it looked heavenward. It endeavoured to observe human life and devised ways to transcend soul from the earth to upward. For that, only spirituality shouldn’t be given all attention. Other facets of culture demanded equal importance. Says Aurobindo, “Indian Renaissance means the revival not only of spirituality but also of that past of curiosity, art, literature etc.” The current situation is Indian spirituality is on decline. There is chaos and discord, but Aurobindo predicts that the same notes, which are creating harsh music, will create a melodious one. In future also, the spirituality will remain the dominant aspect but there will be progress in literature and poetry, science and art. Renaissance would enter the India and make the revival possible. I would like to conclude with the quote by Robert Mc Dermott, containing the essence of spirituality in terms of Aurobindian philosophy:

“Sri Aurobindo’s legacy is a uniquely promising attempt to spiritualize human institutions without institutionalizing the spirit.” 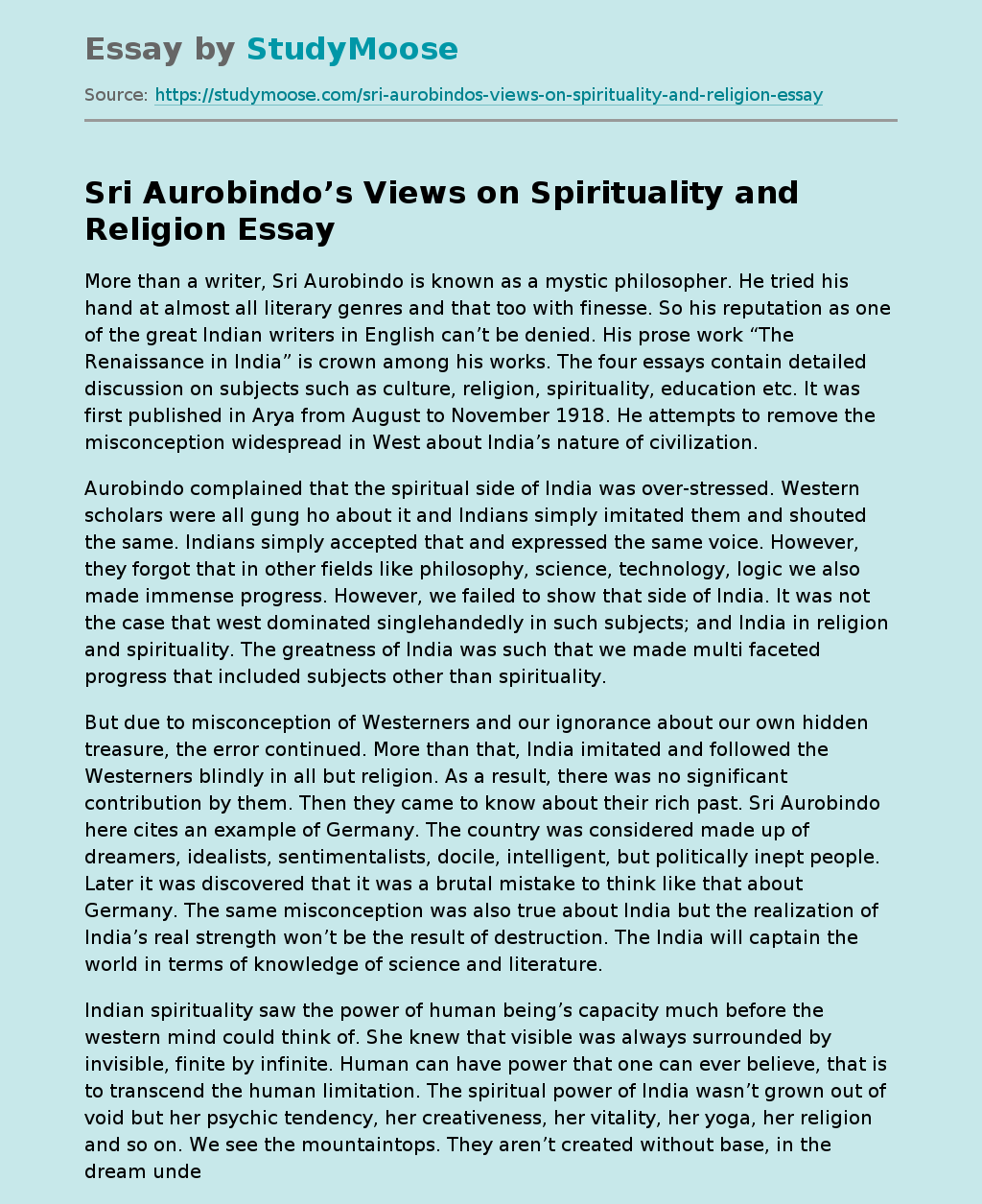