Sports keep teens out of trouble

High school sports require around 14 hours per week, of a students’ time. This time is only the time spent with the team at school mandated activities. It does not include events like team dinners, fundraisers, time practicing by yourself. After an athlete spends all this time at practice, why would they want to go cause trouble? Most athletes would be too exhausted to even do anything after the time they spend at practice. I believe sports keeps teens out of trouble.

Turn in your highest-quality paper
Get a qualified writer to help you with
“ Sports keep teens out of trouble ”
Get high-quality paper
NEW! AI matching with writers

When a student signs up for a sport, they sign a contract in the beginning of the season, saying that they will not act out of place. If you were to act out or break your sports contract. You lose any chance you had at scholar ship for any sports, because recruiters will see your record and automatically think “wow this person is a bad person”. The ultimate goal for an athlete is to play at the highest level they can play at.

The majority of athletes, stay out of trouble so they don’t risk being kicked off the team, or losing a scholarship.

If a teen is on a sports team, they will be at practice more then they will be out on the streets getting in trouble. If they get in trouble they won’t be able to play, so they try their best to stay out of trouble. Sports teach trust and leadership. They will meet the right kind of friends that will help them make good choices.

When a teen surrounds themselves with positive influences, studies show up to 71% will make better choices, than they would have if they had been around a negative influence. Being part of a team gives a kid a positive identity and a feeling of acceptance by the teammates and other peers. Teen athletes are held to higher standards as they are easily identifiable by the rest of the student body, especially when representing their teams. Adolescents tend to explore their individuality while being confident within the confines of belonging to a team. When the University of Princeton did a study of student athletes, they showed that 93% of student athletes interviewed said that they felt like they belonged to a certain group of people while on a sports team.

People against sports say that athletes are bullies and pick on the weaker kids. People think that athletes think that they are better than everyone else. When Stanford did a study on student athletes, they’re counter argument was… “Sports teach the survival of the fittest. They teach primal instincts, such as judging people for their phyical prowess, and living like a salmon (doing the same thing as everyone else, and living to mate.) As a whole, football players are more likely to not do their homework, to have underage sex, to establish “cliques” of bullies, and to become unsuccessful individuals later on. If sports are forced, teens will have something more to worry about. Most already have a load of homework, and some have an instrument. Now they will be judged physically, as well as mentally.

Everyone has different abilities. A teen may have a good grade in school, Harvard might want him, but he can barely do a chin-up. On the other hand, a kid who is so-so in school, but excellent at football, can play football and get a scholarship. It’s a win-win. If students are judged on BOTH brains AND brawn, however, it’s a lose-lose, unless you have perfect DNA.” I am a teen and am in a sport. I believe high school sports do keep you out of trouble. When I was in freshman, I really didn’t care and I use to get in trouble a lot. These attitudes lead me into a great deal of problems, and as a result I was suspended from the first 5 games of the season.

I was supposed to be on Varsity as a freshman, but because of my actions, I was not even allowed to play on JV. I made the team but had to sit on the sidelines and watch my team. When I got into sophomore year, Coach White sat me down and told me he would be keeping a very close eye on me. If I screwed up, I would be cut from the team and would never play Breakneck lacrosse again. So on that moment and on I knew that I had to stop fooling around because I want to play. Now I haven’t, got in trouble, and go back and forth to Varsity and JV. I believe this isn’t true at all. Athletes take pride in their school and in many cases do whatever is asked of them to support the school. Athletes represent their schools and because of that the majority of athletes stay out of trouble to make sure they don’t cause issues for their sport.

Sports keep teens out of trouble. (2016, Sep 22). Retrieved from http://studymoose.com/sports-keep-teens-out-of-trouble-essay 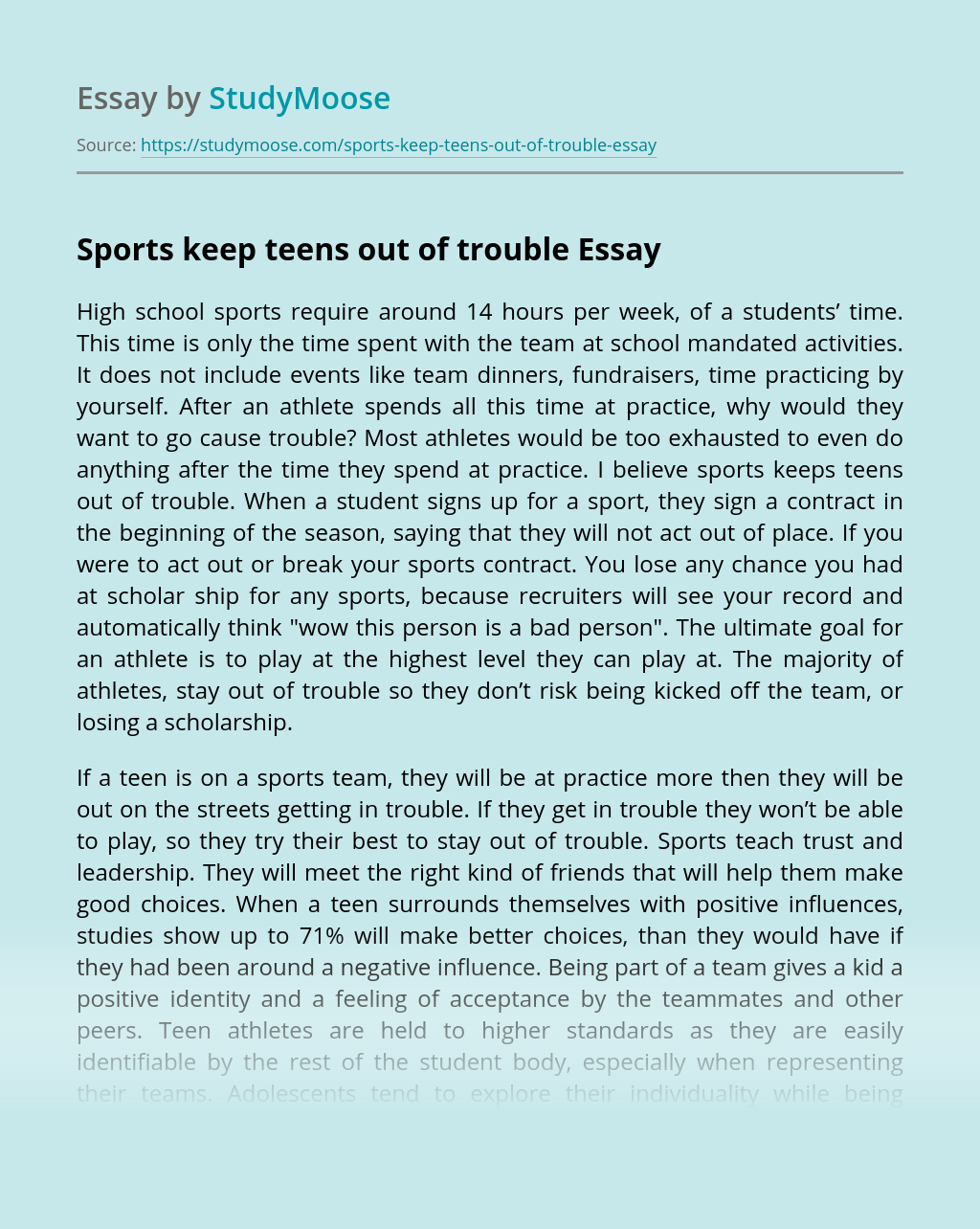 Turn in your highest-quality paper
Get a qualified writer to help you with
“ Sports keep teens out of trouble ”
Get high-quality paper
Helping students since 2015
Stay Safe, Stay Original