On May 19, 2003 at Cincinnati Riverfront Stadium, Pete Rose made the greatest triumph in his career in baseball. He was able to hit a total 4, 192 hits, passing Ty Cobb to become the greatest hitter in the said sports. At the same time, he became a candidate to the baseball Hall of Fame. After a mere four years, this sports star was banned from playing baseball. An investigation found out he had gambled thousands of dollars on baseball games during his peak years as a baseball player.

Don't use plagiarized sources. Get your custom essay on
“ Sports Gambling: The Case of Pete Rose ”
Get custom paper
NEW! smart matching with writer

The investigation also noted that when he was manager of the Cincinnati Reds, he was accustomed to betting for “his” team in every scheduled game.

Thus, Pete Rose appealed to the Major League Board to consider his motion for reinstatement. In his appeal, he admitted “making some mistakes” although he denied the “betting” issue. If appeal is granted by the Board, Pete Rose will have a high chance to be elected to the baseball Hall of Fame (as part of the Cincinnati Reds) – he can once again play baseball.

In his press release though last Wednesday, he admitted that he bet on the Cincinnati Reds every night. He added that during his tenure as manager of the team, he earned thousands of dollars from betting for his team.

Added to that, he also admitted that “his betting” became a habit. This habit, according to him, was borne out of the belief of the capacity of the Cincinnati Reds to win every match. He also said that although betting is morally fatal to an individual, especially a sports star, it is just transitional.

In due time, according to him, an individual will stop from gambling because he will see the negative feedbacks it cause to himself. This was not the first time Rose was accused of gambling. In 1989, he accepted a lifetime ban for gambling, although he denied it for almost 15 years.

In his autobiography published in January 2004, he admitted that he got additional “income” from betting baseball (for the Cincinnati Reds). In the same autobiography, he said that he did not worry of being elected to the baseball Hall of Fame, although he had hopes that he would be reinstated to manage the Cincinnati Reds during majors. Pete Rose is an example of a player (and manager) who engaged in gambling. Although he gambled for his team, it is morally incipient for a player to engage in a game without due consideration to chance. Note that when he was a player, he usually employed a third person to handle his bet.

These gamblers had less chance of winning against Pete Rose, because primarily Pete Rose controlled the game (even during his tenure as manager of the Reds). The so-called “belief” and “love for a team” were nothing but rationalizations of his gambling. These virtues, if we may call them virtues, can function without monetary considerations. Monetary considerations just “bleed the eye of the loser” and “widen the nose of the winner. ” When Pete Rose was interviewed, he admitted that “he was well-pleased of the monetary flow coming to his pockets.

This is generally a proof that gambling when transformed into a habit, can become deadly to the career of a sports star. When the Major League Board decided not to reinstate, Pete Rose said that it was “really nothing. ” This was an instance that he finally accepted the penalty for his “unforced mistakes. ” Hence, his actions contributed to the collapse of his career in baseball. His habit of gambling engulfed his principle of sportsmanship. Now, baseball players are avoiding what Rose did, not for the sake of principle, but for entrance to the baseball Hall of Fame. 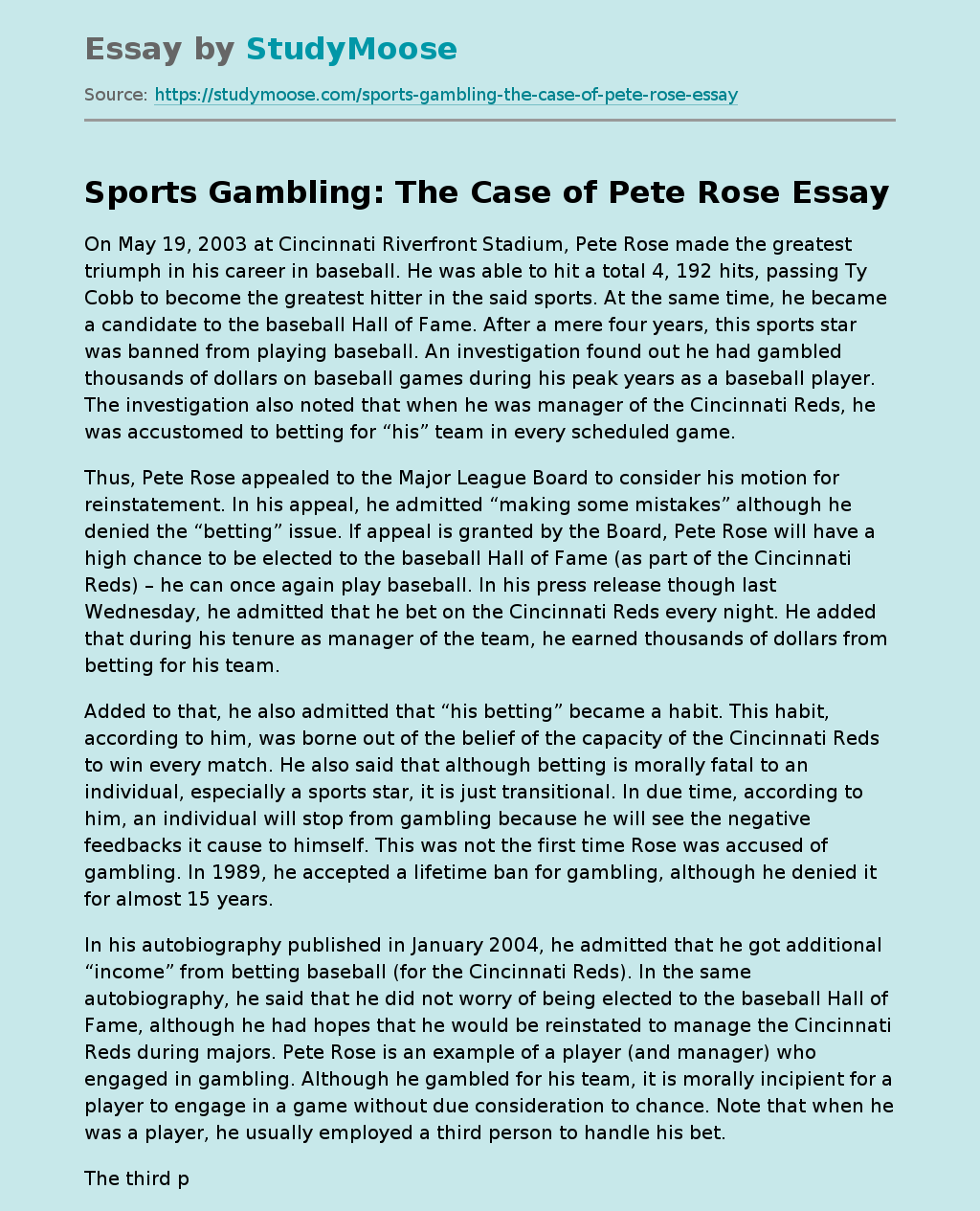