Sport is a big phenomenon of today, it is very important part of today life. However, sport is rather contradictory phenomenon. It is connected with big humanistic values and it formats life and values of billions of people on the one side. It is also connected with dirty business, doping, corruption and violence on the other side. Corruption is not confined to cricket only. We are at a time when the world of sport seems to be awash in corruption. In 2011, prosecutors in South Korea indicted an astonishing 46 football players on charges of fixing matches in the football K-League.

Don't use plagiarized sources.
Get Your Custom Essay on Sports and Corruption Just from $13,9/Page

It’s not just sportspersons who are in the dock. Sports administrators all over the world are facing scrutiny.

The obvious reason why there are so many corruption scandals involving both players and administrators is the incredible amount of money involved in sport. It appears that corruption can be found in almost any imaginable areas of sport. The main areas are match fixing, embezzlement or misusing of sport funds, corruption in hosting of games, corruption in changing sport results, corruption in transfers of players, corrupted elections in sporting bodies.

Cricket is like a religion in india and thus one reason why the epic mismanagement of Indian cricket matters. The other is that it gets to the heart of the cronyism and high-level abuse that plague India more widely. Every cricket season brings news of a fresh scam or intrigue including, on May 16th, the arrest of three cricketers and a dozen bookmakers for alleged match-fixing in the country’s most popular domestic tournament, the Indian Premier League (IPL). What is to be done? As so often in India, the solutions are easy to state and hard to enact.

The government should legalise betting on cricket, in order to control and regulate it. The cricket board must also be regulated more tightly, as the commercial operation it is, not the volunteer organisation it claims to be. It should recognise that the longer it fails to stamp out corruption, the more tightly it will be controlled. It should start by cracking down on the alleged cheats—not, as in previous scandals, seeking to exonerate them after the dust has settled. Such reforms would be opposed by the same powerful people who aspire to run everything in India, from politics to cricket to banking. That is why they are so important. International confidence in India’s ability to uphold the rule of law and fight corruption is at an all-time low. To improve their country’s reputation, its rulers should start by cleaning up their favourite game. 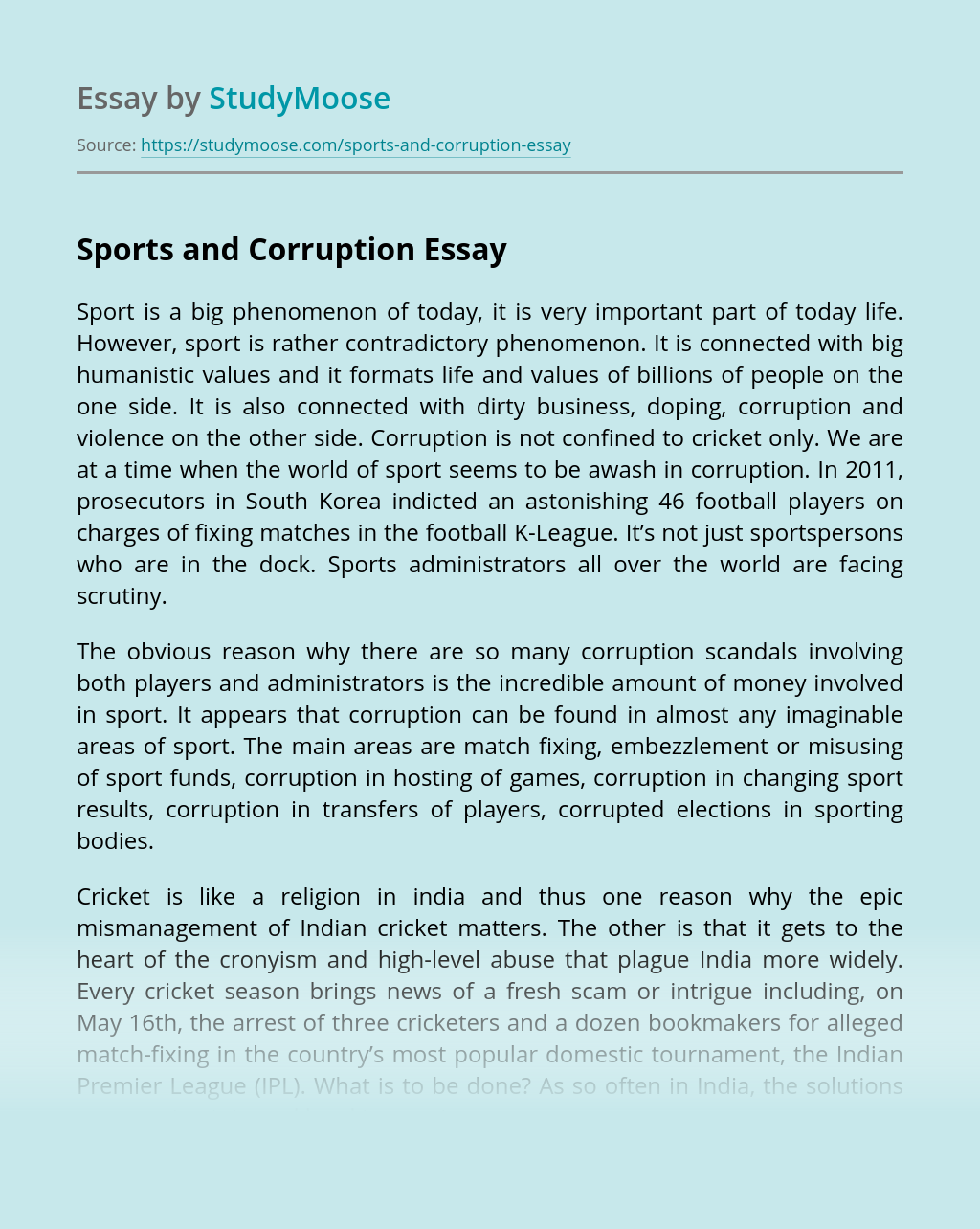 How representative are these poems of Blake’s other work in ‘songs of innocence and experience’ This essay will analyse, compare and contrast two poems by William Blake, called ‘The Lamb’ and ‘the Tyger’. I will be looking at how Blake uses imagery, structure and form to create effects. I will then explore how representative the... VIEW ESSAY

Why would these breakthroughs on their own not be necessarily enough to help injured soldiers in the trenches? (Consider each one in turn) Aseptic surgery: Although it helped prevent infections setting in during operations, they didnt help with open wounds that were already infected before reaching the operating table. Many soldiers were infected from the... VIEW ESSAY

Invisible organizations and systems that part of the firm that reflects the rules, regulations, and processes upon which the organization is based. (John E. G. Bateson, K. Douglas Hoffman, 2010, page 11) The main role of LEGOLAND® Windsor Resort is to offer services that afford thrills, fun and experience; however, all customers consume them at... VIEW ESSAY

My main aim in this essay is to discover how the two poets describe and express their feelings. I will do this by focusing on their use of linguistic techniques and what effect this has given on the reader. Moreover, I will concentrated one how the poets have structured the poem, by carefully analyzing it.... VIEW ESSAY