Imagine if every athlete never got hurt or injured while doing a sport. Well, that will never be reality. Many student athletes never think of the outcome from doing sports. The only thing that is on their mind is becoming the fastest or strongest athlete, and that’s not going to change anytime soon. Sport injuries have increased rapidly since previous years, and it is currently a major part of many athletes’ lives today. Long ago, there were less people, specifically, athletes going to hospitals and going to see physical therapists for injuries.

Turn in your highest-quality paper
Get a qualified writer to help you with
“ Sport Injuries ”
Get high-quality paper
NEW! AI matching with writer

Now days, not only are teenage athletes going to hospitals and physical therapists, but children are going as well. In the article, “Young Athletes Feeling the Pain of Too Much Play”, a study was presented and looked at for specialization in young athletes and the risk of injury, it stated that, “… 1206 specialized athletes ages 8 to 13 who were involved in the study, 859 of them were injured, 564 with injuries caused by overuse—139 serious” (Kara Yorio).

This shows that many adolescents are suffering from injuries. And that was just a low number of athletes that were involved in that study. It doesn’t record for the fact that athletes younger than eight and athletes older than thirteen are injured.

The importance and reputation placed on a well known achieving athlete in America today has led to the increase in injuries. Injuries can be avoidable when the proper precautions are taken and the best decisions are made based on the athletes’ health background and future.

An injury is the harm or damage done to oneself. Participating in competitive sports comes with that risk of many injuries as well as health problems. Sport related injuries are a serious concern among teenage athletes and can affect their life in many ways. Athletes should become knowledgeable and aware of the long term affect of an injury, so that they won’t become permanently damaged for the rest of their life. Sport injuries refer to the kinds of injury that occurs during sports. It is possible to injure any part of the body when playing sports, the term sport injuries is used to refer to injuries of the musculoskeletal. A sports injury can be serious and can cause physical and emotional distress. The physical aspects of the injury can even contribute to loss of a sports career. Even though playing sports is always good for your health because you’re getting the exercise you need. But, too much exercise can also result in injuries. Sport injuries can result from something acute, or from the overuse of a particular body part. Many injuries are preventable that is, if, the athlete is willing to follow the directions given by their doctor.

In the article, “Common Health Reform and Reality,” writer Goldberg points out that a doctor’s perspective is always 95 percent accurate. A doctors perspective on any injury can be anything from take some time off to let your body heal to you’re out for the rest of the season. Athletes don’t take what a doctor says into consideration. As in the article, “Young Athletes Feeling the Pain of Too Much Play”, Kara Yorio quotes what a young athlete by the name of Rachel Egyed says after being told by a doctor to rest, “I tried to take time off as much as I could, but I can only do that to a certain extent.” This shows that young athletes now days rather continue to play injured, rather than taking some time off to rest for a full recovery. This is why, over the years sport related injuries have made a come up. Some reasons for that are because many children are getting involved with sports at a much younger age than in the past. Earlier focus on one sport, rather than on multiple sports throughout childhood and adolescence, is occurring more often. Opportunities for sports scholarships are increasing and also the added drive from parents and coaches to achieve excellence in youth sports have also increased the intensity level at which these young athletes participate. Many athletes don’t bother to notice the change that their body goes through once an injury has occurred.

They also don’t know that there are warning signs that your body gives off to inform you that you have an injury. In her article entitled “Why Running Hurts,” Capt. Gena Ellis brings to our attention, “… warning signs may help you recognize an injury in the making: chronic fatigue, pain in joints, lack of or change in appetite, and a decrease in running performance”. These are warning signs that young athlete need to pay attention to so that an injury can be spotted at the beginning of the process. There are many different types of sport injuries that an athlete can get such as stress fractures, stress fractures are tiny cracks in the bone. Stress fractures are caused by the repetitive application of force, often by overuse, such as repeatedly jumping up and down and/or running long distances. Also, shin splints, the main cause of shin splints are too much force on the shin bone and connective tissues that attach the bone to surrounding muscle. Another is tendinitis, tendinitis can be caused by a sudden injury, and the condition is much more likely to start from the repetition of a certain movement over time. Lastly is cartilage damage, the cause of cartilage damage includes, tears in injuries, it could just be a genetics thing, or other disorders such as arthritis.

The four injuries stated above all have similar symptoms which involve tenderness, and swelling in the painful areas. Overtraining is something that many athletes do. It is simply a condition that involves applying too much stress on the body by doing physical activity. Training is a very important part the success of an athlete. By training it will change the athlete’s performance dramatically. But too much training will lead to the body being stretched too far, which will cause performance to decrease. In the article entitled, “When Training Backfires: Hard Work That’s too hard,” Gina Kolata states, “ It can come on so insidiously that before athletes know it, the find themselves trapped in a downward spiral. The harder the train, the worse they do”. Basically, when athletes train they don’t take the time to actually have a full recovery or even had a rest day. Over training can cause pain to the athlete, it can also cause permanent damage to the body, which is a huge risk, many athletes take now days. Permanent damage happens when an athlete comes back from an injury not fully recovered.

This, however, is a problem because when an athlete comes off an injury not fully recovered it leads to more injuries. Just like an injury, an athlete will know when they’re over training. Athletes undoubtedly want to reduce or eliminate their chances of injury while participating in a sport. All Injuries can decrease the amount of time you spend participating in a sport. Preventing and avoiding injuries is a big part of an athlete’s career, and it is something that many will fail to realize. According to the article “How to Prevent Sport Injuries,” Elizabeth Quinn releases that “injury rates could be reduced 25% if athletes took appropriate preventative actions”. All athletes should make sure they’re in the proper physical condition for a sport. There are many solutions to avoid sport injuries. Before doing any sport there should be a pre workout. A pre workout can be described as a warm-up. A warm-up is done for specifics reasons. It’s done to increase performance as well as avoid injuries. A good warm up will gradually increase your heart rate, increase circulation to your muscles, tendons and ligaments, and mentally prepare you for your performance.

With that being said, the more time an athlete spends warming up the better he/she will perform and it will minimize the chance of injuring oneself. The most important reason for doing a warm up is to prevent injury during exercise. Keeping the muscles warm will prevent acute injuries and will hold back overuse injuries by allowing the body to prepare steadily and safely. Cooling down after a sport activity is another way to reduce injuries. Cooling down is the concept of a light exercise that follows demanding physical activity. In the article “Exercise,” it brings up, “Slow walking and stretching for five minutes at the end of an exercise session is therefore a good practice”. By doing a cool down at the end of an exercise session, it should slowly decline the heart rate (“Exercise”). Other than bringing the body temperature and heart rate down, the cool down helps the body dispose of waste products and toxins generated during exercise. The most known waste product is lactic acid, if this is allowed to build up in the body, it may cause stiffness and cramps the following day. An effective cool down will also help to prevent dizziness, which can be caused by stopping an activity suddenly. 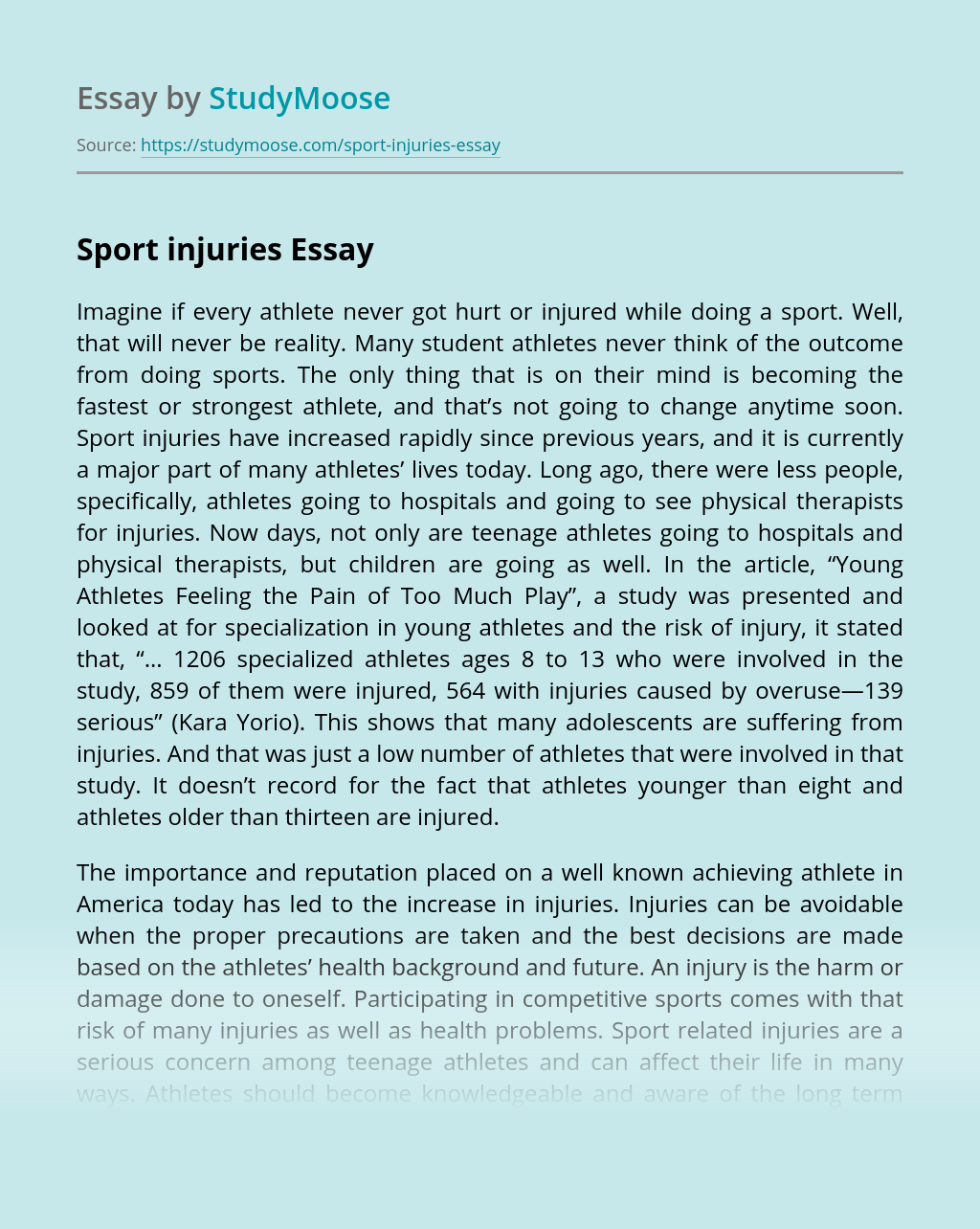 Turn in your highest-quality paper
Get a qualified writer to help you with
“ Sport Injuries ”
Get high-quality paper
Helping students since 2015
Stay Safe, Stay Original