Spiralling Down of Indian Economy 2020

Depression in an economy is going on since ages. In contrast to Indian economy Depression is the Key Soul since long back. Before we come to the Indian economic context, Let’s learn what depression is- In the year 1929-1933 the economy undergone through great depression where the output and employment declined. This mainly had an impact in European Countries and North America. Workers were thrown out of their job. Stock of supply remained idle . There was a great deficient in terms of demand and deflation which not only had an impact on the above two continents but all the economies of the world had to face the same.

Don't use plagiarized sources. Get your custom essay on
“ Spiralling Down of Indian Economy 2020 ”
Get custom paper
NEW! smart matching with writer

Even the unemployment rate went up from 3% to 25% in USA. There was a fall in the market as a whole. Now let us come back to our Indian economy going through the same again cause of so many elements into it. Since Nov 2016 it took its form towards depression can also mention as beginning of crisis.

The first element which led to depression is, in the year 2016 of Nov Demonetization was announced inorder to curb black money i.e money laundering. Without going into details question is does it really worked ? Only the middle class people had to suffer. What I found that people had to leave their all works and stand in queues to get their own money. Sti the matter is not sorted out to the extent. Second in the list is GST (Goods and Service Tax) July 2017. It is strange that without educating it’s people or knowing the consequences it got implemented on the spur of the moment.

Great! With this economy began to collapse In the year 2019 it emerged to take its form. Many automobile sectors got shut. Workers were thrown of their job. One of the known brand Parle-G the oldest in India, functioned for 87 years is now no more in market due to decline in production capacity and productivity. GDP too started declining.

People were fuming with these stuffs and then our government came with a new subject which is no useful to the economy not only from my point of view but is being argued and had debate, discussion on the topic which is not only destroying the peace but also damaging the resources and assets of the country. Yes I am talking about CAA(Before implementation CAB)-NRC-NPR. Every one in the country as well as outside are well aware of this. Which is no good to the society as a whole.

Government is busy with Communal stuffs. And see what we all are into(Corona virus). Yes since Jan 2020 this virus has made to lose one’s senses. Corona Virus is not flu it’s worse than flu. This outbreak of Coronavirus has impacted almost all the countries of the world. But in Indian context it really has a worse impact than ever. It lead to fall of the trade deal. We Indian economy has a great trade deal with China starting from Medicine, Plastic goods, Gadgets to Electronic goods. Even the rate of crude oil is also getting spiralled down too. People are fighting for their citizenship and govt. Leaves no chance to take action in every step (After a long Riot took place). No proper or genuine solution is being taken till date in favour of country’s peace. Now every one is fighting for one’s own life. Government brought panic by bringing CAA-NRC-NPR and the condition each one is facing around the world is no good. It is a matter of serious concern as of now govt should work together with its people on the outbreak of Corona Virus and how to get rid of with a secure environment.

Last but not the least would like to talk on economical policies of our economy. In this respect still, India lags behind. Our own resources are working for other country Why? Bound to take the name of Mr.Sundar Pichai an Indian due to lack of opportunities and proper policy he is now an asset to the other economy. Though in the budget of 2020 it has been stated by our Finance Minister Nirmala Sitharaman to bring a positive rise by Disinvestment of LIC and merger of banks and many more but from the current situation clears us the fact that banks with bad loans not only ruin the economy but it leads to several other aspects. Hope everyone got the idea yes I am talking about ‘Yes Bank’ and with this many are in the queue the recent one is Punjab National Bank. Because of no proper policy, loans were provided and led to NPA. Market started collapsing still today the case is getting worse(Stock market ).

On this account one thing to be kept in mind govt has to be keen eyed on banking sector before the collapse takes place and should work on the peace of its economy. Otherwise there will be no less case like Mallya or next Nirav modi. And the recent cases of NPA. On 13th March 2020 midnight American President Donald Trump declared national emergency due to severe impact of Corona Virus. It has also been declared Pandemic and is of serious concern. So, eat healthy and maintain hygiene .

Spiralling Down of Indian Economy 2020. (2020, May 20). Retrieved from https://studymoose.com/spiralling-down-of-indian-economy-2020-essay 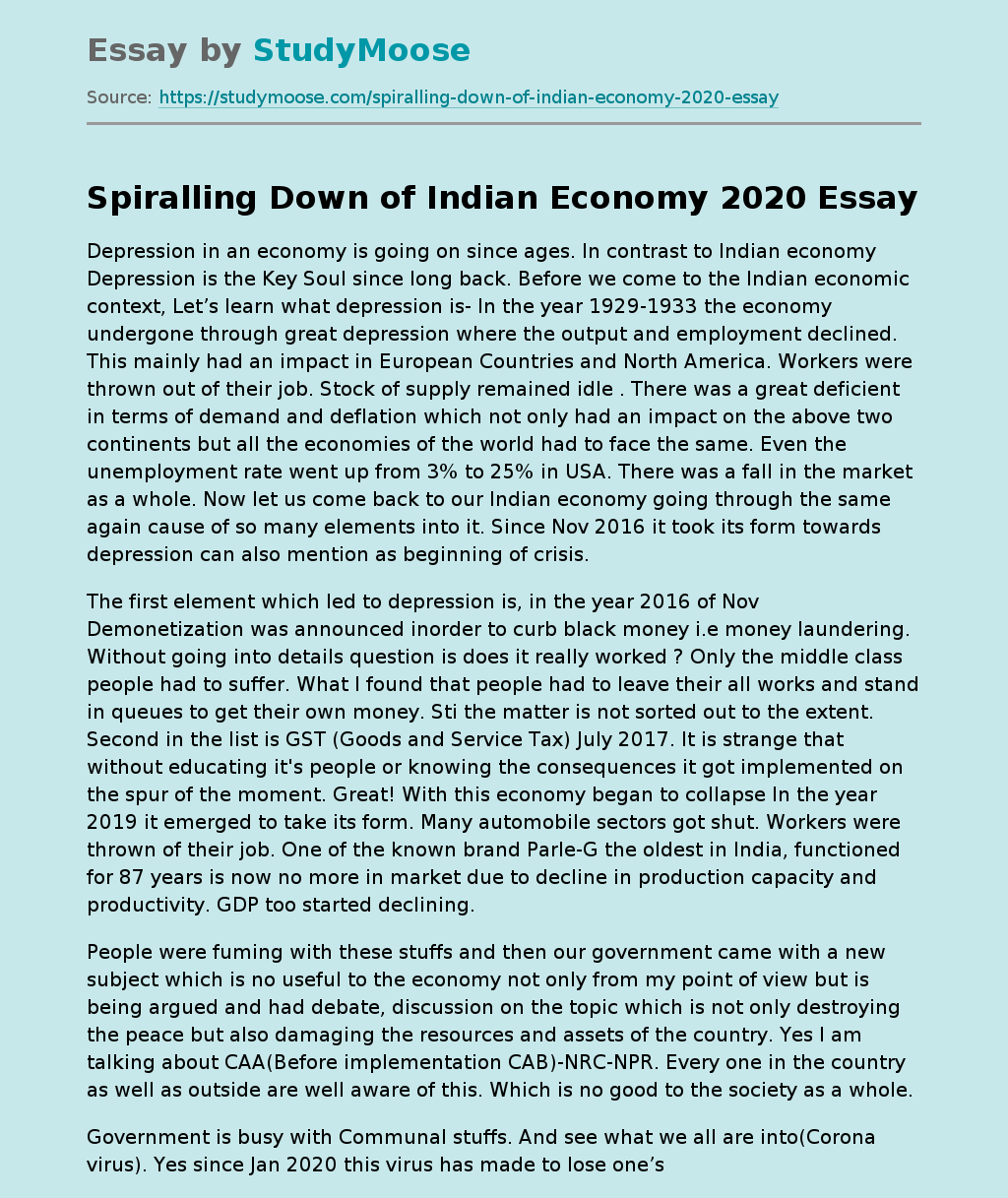