Spending Holiday in Seaside or Mountains

“Before I can tell my life what I want to do with it, I must listen to my life telling me who I am.” Parker J. Palmer Topic: Spending holiday in seaside or mountains…
Prepared by: Tahere Imani
Always, it is a hard decision to choose the most enjoyable places for vocation, especially when different traveler has their own idea; but obviously all of them want a luxury place which end up their decisions to the most beautiful places, such as: mountain and seaside.

Turn in your highest-quality paper
Get a qualified writer to help you with
“ Spending Holiday in Seaside or Mountains ”
Get high-quality paper
NEW! AI matching with writer

Actually it depends on their own tastes to spending time in the mountains or seaside, but these places have their own especial features such as: climate, activities, and other things which prepare the right of choosing for everyone, based on their own wanted. At first I want to speak about mountain’s features, which are briefed into two important features that noted above.

Climate has the most significant role in people’s decision for travelling, because it guarantees the possibility of other matters.

Even though mountain’s climate is so fantastic and brings pure air in our lungs, but it is cold, and become colder in higher altitudes, because of this matter surely we need to have enough information about climate in vocation days and suitable equipment for travelling. Several times we heard about different group of mountaineers who trap in snowing whether of mountain, because lack of information about climate or inappropriate equipment of traveling. Actually As noted before climate make the possibility of some activities, such as: climbing mountains, hiking, skiing or any other hard activities which mostly are done by young people and old people don’t have tendency or enough power for doing them.

Seaside is the next place which has its exclusive features. In contrast of mountains, seaside has higher temperature which doesn’t need to have lot information about its climate before travelling, because most of the time has its own warm climate, and its beauty is hidden in its sultry whether. Seaside is so beautiful and enjoyable place, especially for people who are used to live in this kind of whether. Its climate also makes the possibility of various activities which don’t have restriction, and those are simple activities, which can be done even by young and old people, Like; swimming and some games such as: volleyball, tennis or… .

Walking or even sitting next to the sea and looking at its interesting view is another activity which considered as the most important element of calming. I, myself prefer to gain peaceful feel of sea by watching it and remembering all good memory of my own life. As result, it can be said that different people are attracted by especial features of various places, and I believe that tendency of people toward various places or any other things just depends on their own nature and the beliefs they are grown with.

Spending Holiday in Seaside or Mountains. (2016, Mar 19). Retrieved from https://studymoose.com/spending-holiday-in-seaside-or-mountains-essay 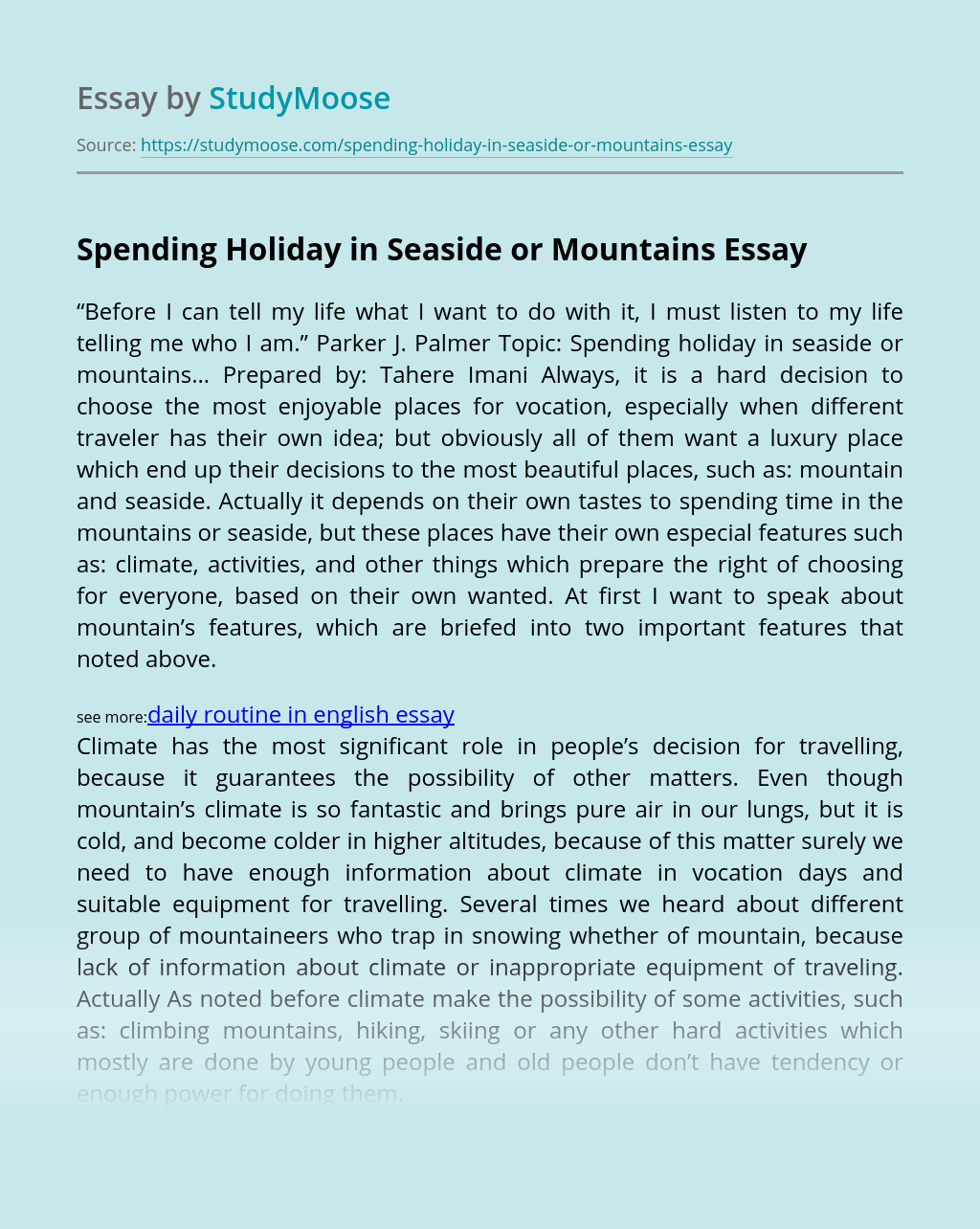 Turn in your highest-quality paper
Get a qualified writer to help you with
“ Spending Holiday in Seaside or Mountains ”
Get high-quality paper
Helping students since 2015
Stay Safe, Stay Original