Determining the speed of light is something that has been a very long and trying process. No one scientist could determine such a thing. Galileo was the first noted scientist to attempt experimentation on the speed of light. Other famous scientist, such as, Roemer, Foucault, Fizeau, Michelson, and Einstein added their own discoveries to the collage of information gathered through the years. Every scientist performed their experiments differently based on the knowledge and ability they had at that time. Along with information collected from scientists before them, technology also played a role in finding accurate information and making experimenting easier.

Don't use plagiarized sources.
Get Your Custom Essay on Speed of Light Just from $13,9/Page

He believed in using the scientific method, as opposed to strictly philosophy, which was mostly used during those times.

“In order to perform his experiments, Galileo had to set up standards of length and time, so that measurements made on different days and in different laboratories could be compared in a reproducible fashion. For measurements of particularly short intervals of time, Galileo sang songs with whose timing he was familiar. Galileo also attempted to measure the speed of light, wisely concluding that his measurement technique was too imprecise to accurately determine its value. He climbed one hill and had an assistant to climb another hill; both had lanterns with shutters, initially closed. He then opened the shutter of his lantern. His assistant was instructed to open his own shutter upon seeing Galileo’s lantern.

Galileo then measured the time interval for his assistant’s shutter to open. Knowing the time interval and the separation between the hills, he determined the apparent speed of light. On repeating the experiment with more distant hills, Galileo obtained the same time lapse, concluding that the time for the light to travel was much less than his and his assistant’s reaction time, and therefore that the actual speed of light was beyond the sensitivity of his measurement techniques. (“Father of modern,” 2007)” Despite his findings, Galileo knew that there were limits to his theory because the conclusion of his experiments didn’t exactly line up with any theoretical or mathematical form. In the early 1600s, Galileo and his assistant attempted to measure the speed of light. They each stood on different hilltops (in Italy where they lived), each holding a shuttered lantern. Galileo would open his shutter, and, as soon as the assistant saw the flash, he would open his shutter.

They were less than a mile apart and Galileo could detect no delay in the round-trip time, greater than when he and the assistant were only a few yards apart. While he could reach no conclusion on whether light propagated instantaneously, he recognized that the distance between the hilltops on which they were standing was perhaps too small for an accurate measurement. In 1676, the Danish astronomer, Ole Roemer was the first person to measure the speed of light. Until that time, scientist thought light was too fast to measure or infinite. You could say Roemer came upon the speed of light almost accidentally. While working at the Paris Observatory, he was “compiling extensive observations of the orbit of lo, the innermost of the four big satellites of Jupiter (Soter, 2000)” when he discovered the speed of light. Roemer was timing the eclipses of the lo by Jupiter hoping for a more accurate value for the satellite’s orbital period.

These observations had great importance during the seventeenth century because the tables of the orbital motion of Jupiter’s satellites would provide a “clock” in the sky. Navigators and mapmakers of that time used this clock to read the absolute time. Then, by determining the local solar time, they could calculate the longitude from the time difference. This method of finding longitude eventually turned out to be impractical in our day and age and was eventually abandoned. Despite this, the lo eclipse data unexpectedly solved another important scientific problem: the speed of light. Armand Hippolyte Louis Fizeau was a great astronomer, physicist and inventor. Although he was a very accomplished man, he was not well known. Fizeau was the first person to photograph the Sun in 1845 and he made the first reliable measurement of the speed of light and determination of the velocity of light. Throughout his life, Fizeau was fascinated with light and how it worked.

He was the first person to invent an interferometer that measures waves of light by using interference patterns. While in college, Fizeau and his friend, Foucault, worked together to discover the interference of heat and light. “He published the first results of the methods he used to find the speed of light in 1849. (“Armand Hippolyte Louis,”)” He successfully measured the speed of electricity in 1850. “Using all of the advances he accomplished, Fizeau began studying the thermal expansion of solids. He used crystals as his prime experiment by applying the phenomena of the interference of light to the measurement of its dilatation. (“Armand Hippolyte Louis,”)” After much research and experimenting with light and the waves of light, he made the first estimate of the speed of light in 1849 and measured it to travel about 194,410 miles per second.

He placed a light five miles away from a mirror and set up a toothed wheel in front of the light. The light traveled through a gap between the two of the teeth, reflected on the mirror and passed back through the gap between the next two teeth. Fizeau measured the speed of light through the speed that the wheel was moving. Fizeau used interferometer surfaces, but his did not reflect the light one hundred percent. He did this to keep secondary reflections away from the surfaces to make the experiment more accurate.

Fizeau was the first to predict a light source that is moving toward the observer would be more toward the violet side of the light spectrum because the waves would be pushed together. One that is moving away would be more to the red end of the spectrum. Through many experiments with light traveling through air, he was able to measure the velocity of light as it passed through a liquid. Out of all the wonderful discoveries Armand Hippolyte Louis Fizeau made during his life, the discovery of the speed of light is one of his greatest accomplishments.

“In 1908, he asked Robert Millikan to supervise thesis preparation, explaining that students were either unable to handle problems as he wanted or ‘they get good results and at once begin to think the problem is theirs instead of mine.’ (University of Chicago)” Michelson’s experiments on the velocity of light used consisted of a rapidly rotating, multifaceted mirror to reflect a beam of light. When the speed was correctly adjusted, light reflected from the rotating mirror struck a mirror held in a fixed position and returned to strike the next face on the spinning mirror.

The time needed for the next face to rotate into position to precisely reflect the light was the time required for the light to travel the known distance to the stationary mirror and back. In his earlier attempts, his materials barely cost ten dollars. “With this, he measured the speed of light at 186,508 miles per second, or within two hundred miles of the actual value. (University of Chicago)” Michelson built his own machines and instruments. Michelson believed light traveled through ether. He never could prove this. Even though science has progressed far beyond Michelson’s discoveries, his dedication to experimenting and precision in data has made him a famous scientist in history. 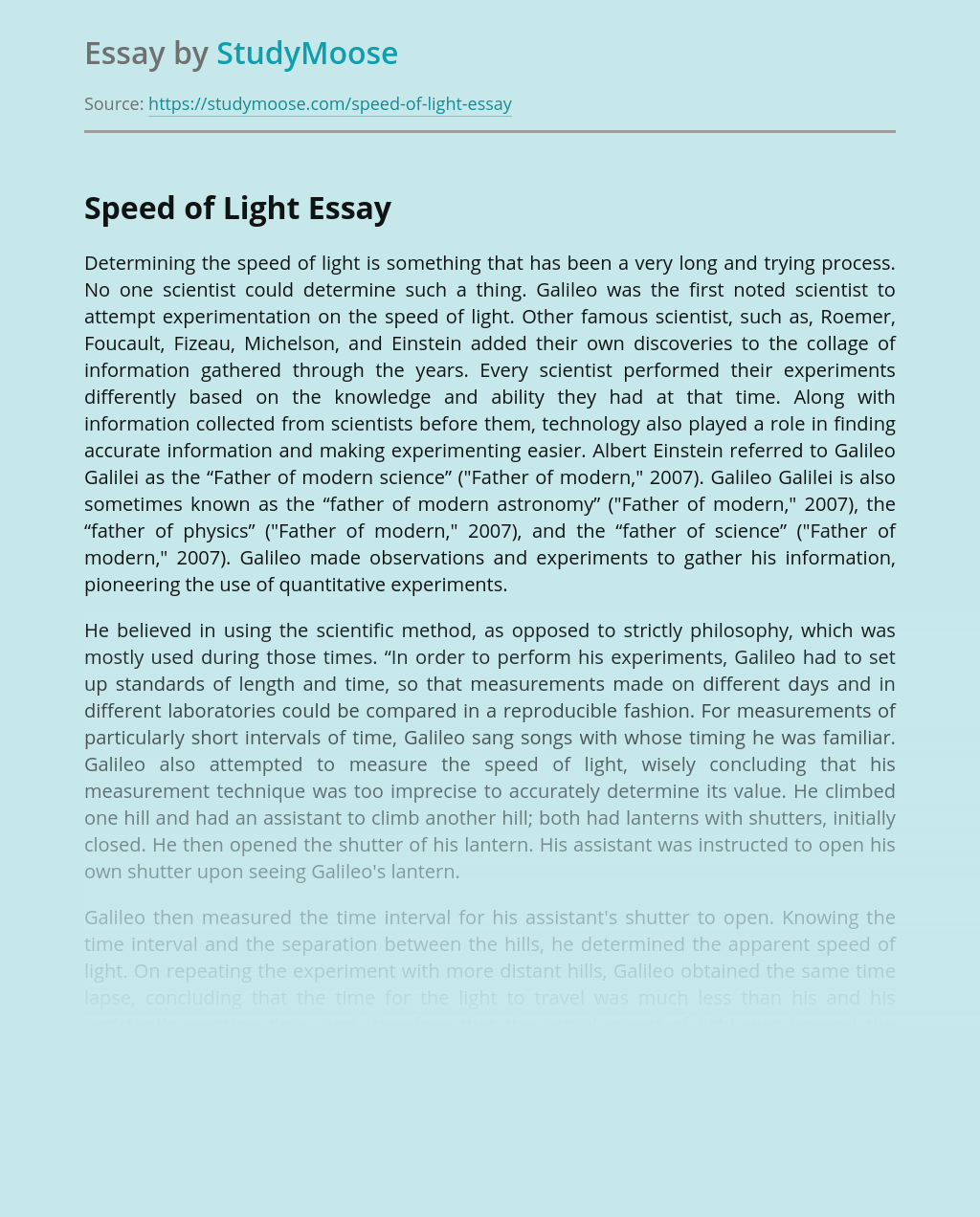 KNOWLEDGE IS FORMED AND ACQUIRED IN THE COURSE OF OUR LIFE THOUGH COGNITION AND IT IS NOT INBORN AND DEVELOPS FROM OUR OWN IGNORANCE. JOHN LOCKE COMPARED IT WITH TABULA RASA OR SOME SORT OF A BLANK SHEET UPON WHICH NOTHING IS WRITTEN. THESE ARE DATA OR IMAGES OF THE OBJECT WHICH STIMULATED OUR SENSE-ORGANS-SIGHT,...

View sample
The Creation of a Modern Education System for Ireland

Consumer Behavior Monster Energy Target Market Because the energy drink is still part of a new and developing industry, the energy drink target market is different than in some of the other beverage industries. Monster energy drinks have become a very popular, “hip” part of society, but the market at which they are aimed is...

Annie Makes a Mess of her New Red Dress sprouted from a seed of a few ideas about a little girl who receives a new dress and has trouble with it. The purpose of my children’s book is to communicate the different elements of life that small children love or hate such as birthday parties,...