Speech: smoking should be banned

Good afternoon Ms Gorman and fellow class mates I am standing before you today to argue and present why smoking should be banned.

Cigarettes the poison of humanity, killing thousands every year, children smoking at the age of 12 , the bad health of smokers and people around them and hundreds of dollars being wasted on them, will it ever stop? These are the aspects which I believe are of most interest on this topic of smoking should be banned and are what im going to present today.

Don't use plagiarized sources.
Get Your Custom Essay on Speech: smoking should be banned Just from $13,9/Page

Underage smoking, a big problem we are faced with in today’s society, research from the Queensland government shows that in Queensland just one of Australias’ states 2 million illegal sales were made to underage children last year, if this many illegal underage sales are made just in one year think about how many children worldwide are smoking rite this instant.

There are an estimated 1.5 billion smokers in the world, 20% of which are aged 13-15, that means 300 million ages 13-15 are smokers, think of these childs futures if they are smoking at such a young age, the cigarette companies don’t care about how many people are dying, suffering or hurt by their products all they care about is the billions of

dollars they receive every year by selling these chemical filled products.

We as children should be enjoying our youth, socializing, having fun, playing sports , enjoying life as a youngster while we can. Children, and teenagers shouldn’t be wasting their time and money on something which will give them bad health and the inability to physicall perform like they used to before they started smoking, smoking makes the user unfit, if one were a serious smoker he would be inable to run and last as long as he /she used to , being fit as a child is a very big thing, gathering together on weekends, and holidays enjoying a game of cricket, or soccer at the field is what being a kid is all about, it’s the time we get to have fun with no worries about finance, shelter and work it’s a time when we shouldn’t be spending our lunch or going out money our caregivers give us on cigarettes, it’s a problem that is increasing in this world, and if smoking continues to be legal and not banned,this problem of our worlds children being smokers will just increase into higher numbers making it a worse place to live in, also for the children who are affected passively, whilst they are just hanging around with their mates not smoking but affected by the pollutants their friends are breathing out.

Bad health is another aspect why smoking should be banned Smoking is an important risk factor for the three diseases that cause most deaths in Australia: heart disease, stroke and lung cancer. The mixture of nicotine and carbon monoxide in each cigarette people smoke temporarily increases your heart rate and blood pressure, straining your heart and blood vessels.This can cause heart attacks and stroke. It slows your blood flow, cutting off oxygen to your feet and hands. Some smokers end up having their limbs amputated

Research shows that every 6.5 seconds someone in the world dies from a smoking related illness i.e., heart disease, stroke and lung cancer. Now is it really worth having cigarettes legal, I think not, why should a substance which kills and causes disease and illness be available to buy at nearly every shop you visit, it shouldn’t, lung cancer from smoking is caused by the tar in the tobacco smoke, men who smoke are ten times more likely to die from lung cancer then non smokers, now people must thing. Is smoking really worth dying for prematurely? Smoking causes disease and is a slow way to die. The strain put on your body by smoking often causes years of suffering.

Emphysema is an illness that slowly rots your lungs. People with emphysema often get bronchitis again and again, and suffer lung and heart failure. Commercials which im sure all of you have seen are made by the government to show people the affects of smoking and to try get people to quit.The commercials might seen horrible and disgusting but its what is actually happening to the human body , examples of them are the display of the amount of tar in the brain and the display of the effects of the lungs rotting, its not a pretty picture but these cigarettes are the cause , and must be banned. And finally the third aspect of why smoking should be banned is the money being spent every year on cigarettes.

The multi million dollar cigarette industries arn’t concerned about whether its users are going to lead a healthy life and die of natural causes, all they are after is the money, they invent these products and seduce people by putting addictive chemicals in them , so when people try it, they feel like they can’t stop and must have another.

Not everyone has the self power to decide to quite, most people don’t even think about quitting anymore because they say its just to hard for them , im sure nearly everyone in this room has herd that before, smoking should be banned, not only are adults wasting ridiculus amounts of money on cigarettes but children are to, eligibility to buy cigarettes is 18 and over,it’s the law, but so many corner stores break this law just to make a measly 10 dollars per packet, it’s just not rite, law enforcement cant find and catch all these perks who illegally sell cigarettes to minors for the profits so smoking should be banned, the money that people are spending on cigarettes can be put to so much better use, in things such as better clothing, shelter, food and luxuries, parents can buy better things for their children so they can have a better education, and children who smoke can save their money on something more useful like school books even toys, its better then rotting their lungs and minimizing their life expectancy.

If smoking continues to be legal and doesn’t become band all these problems that we are faced with today will just increase and our world will be a worse place, children shouldn’t be smoking, people shouldn’t be dying every 6.5 seconds from a smoking related death and people should not be spending thousands of dollars a year on these products filled with chemicals that only cause pain and suffering, these are the reasons why smoking should be banned. Thank you.

Speech: smoking should be banned. (2016, Jul 22). Retrieved from https://studymoose.com/speech-smoking-should-be-banned-essay 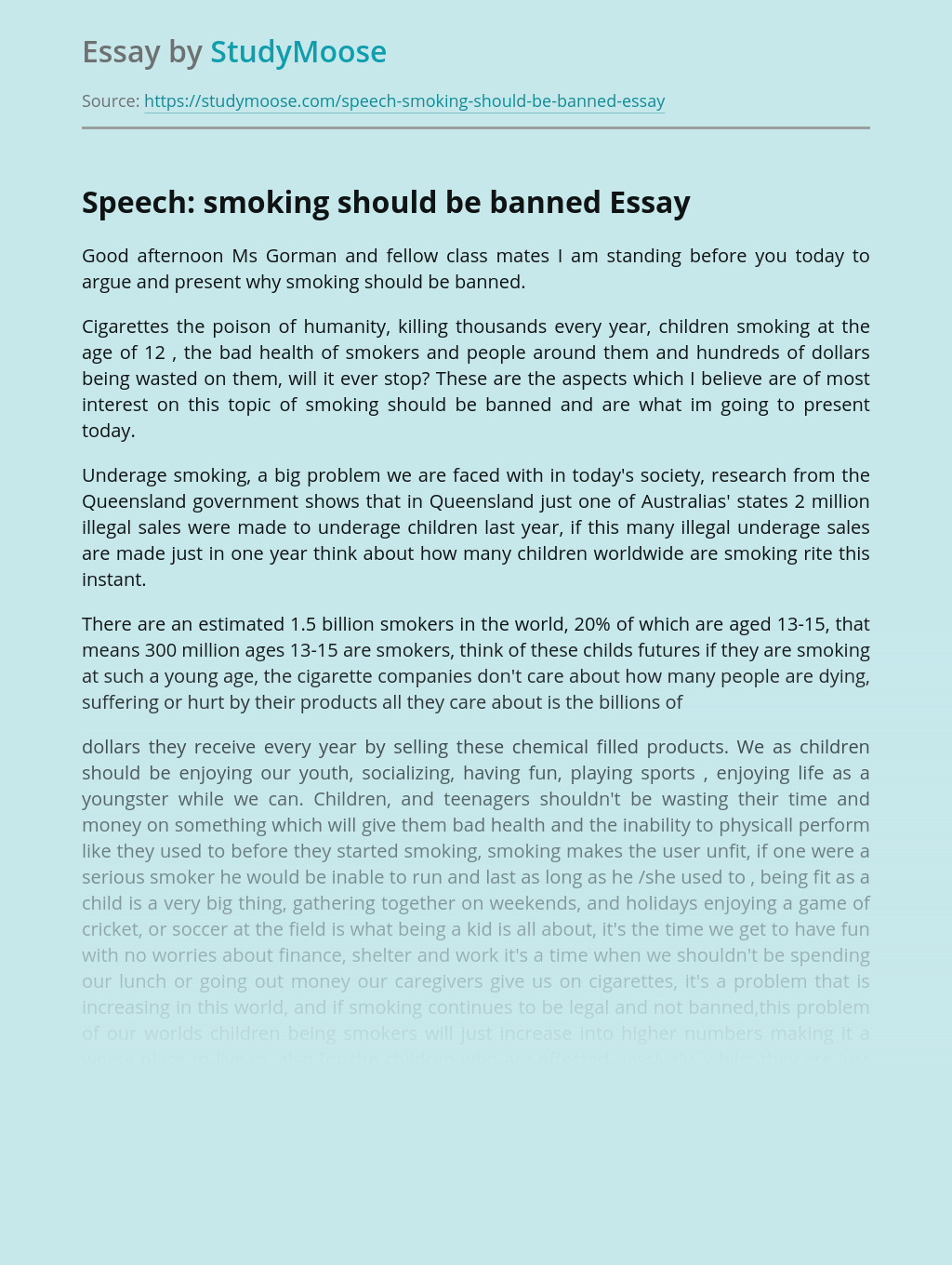 Today I’m going to talk to you about the silent killer. The world’s most dangerous, most widely used substance of abuse. Forty-six million Americans are addicted to the invisible drug. It is as addictive as cocaine and heroine, yet its makers continue producing and distributing it nationwide. The invisible drug is hidden within the leaf...

The Fault in Our Stars Book Review

I read the book “The Fault in Our Stars” by John Green. This book is young adult fiction. The reason I chose this book is because I heard amazing things about it from literally everyone I talked to and I kind of just wanted to see what all the hype was about. The story starts...

Body composition is made up of different types of tissue such as lean tissue, muscle, bone, and organs, which are metabolically active and fat tissue that is inactive. Wiley points out that, “Where you store your fat affects the health risks associated with having too much. Fat is located under the skin, called subcutaneous fat,...

The well known expression, you are what you eat, is even more true as we get on in years. If we had eaten the food that was good for us in our younger years, the chances of staying healthy longer will improve as we get older. Also, the likelihood of maintaining a high quality of...

Cancer is a big issue all around the world. It can affect the young and old, active and inactive, and slim and overweight. There are no guarantees for anyone. Even though everyone may be at risk, there are ways to protect yourself and lower your risk. By protecting yourself from cancer, you can avoid smoking...