Ever since I was a little girl, I have gone to the buffalo zoo every summer. I have always been completely and utterly mesmerized by the huge animals to the right of the zoo entrance. Every time I go, still to this day, it takes a lot to persuade me to leave that exhibit. There is something so magical about these giant creatures. Something extremely intriguing. The way that they stand so tall, and present themselves so calmly.

Don't use plagiarized sources.
Get Your Custom Essay on Speech on Giraffes’ Nature Just from $13,9/Page

It’s almost calming just to be around this animal. Reveal the Topic: This animal I am talking about is the giraffe. Credibility: I have done extensive research on these animals over the past few weeks and I have always had a passion for them. Preview the Body: Today I will tell you how interesting the anatomy and appearance of the giraffe, their lifestyle, and their habitat can be.

Let’s start with the anatomy and appearance of the giraffe.

The giraffe’s outside appearance is what makes this animal so recognizable. There is no other animal like it. a. Everyone recognizes the giraffe by its coat. Each giraffe has whiteish yellow skin with brownish or reddish markings that cover the entire body except for their lower legs. Each giraffe has unique markings that are unique to that individual and to their species of giraffe. Just like there are no two snowflakes that are the same, there are no two giraffes that are the same. These spots vary in size, shape, color, and amount of white that is around them.

Giraffes have the greatest range of vision of any land animal, this is partly due to how tall they are. Their height is used to their advantage. Worlds tallest mammal! They grow to about 20 feet tall. That would be like taking four of me and stacking them on top of each other! The proportion of their body is 9 feet long for their neck and head, 5 feet for their torso, and 6 feet for their legs! They use their height and their 21 inch black tongue to reach the highest of branches.

The giraffes anatomy is very unique as well.

The giraffes habitat is unique to them.

In conclusion, Giraffes are one of the most interesting mammals out there and there are many reasons why, including their anatomy and appearance, their lifestyle, and their habitat. The next time you get the chance to go to the Buffalo Zoo, take time to stop and watch the giraffes because I guarantee you will be mesmerized just like me. 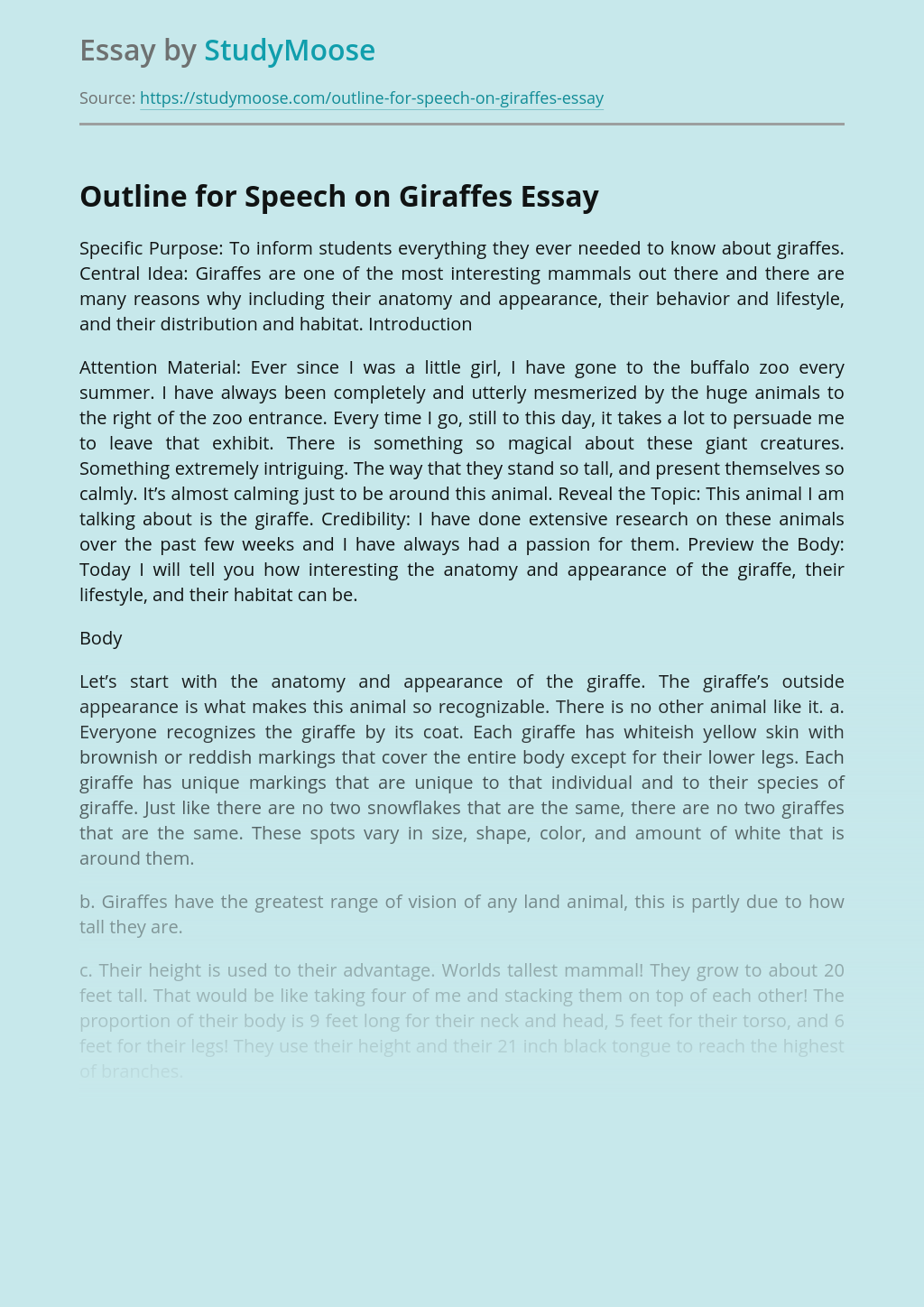 Rate this post In this report I will talk about how factors affect travelling to long haul destinations and in this I will include: time zones, climate, seasonality and extreme climate conditions, travel restrictions, entry and exit requirements, health issues and social situations. In this report I will cover all of those with destinations such...

Out of Africa or Multiregional Theory

Get Essay
Things Fall Apart: The Downfall of Okonkwo

Rate this post In _Things Fall Apart_ by Chinua Achebe, Okonkwo has always feared the fate that plagued his father. Luckily for Okonkwo, he has the determination and will to overcome the foreseeable future that his father has laid before him. This novel tells the story of a character that is intertwined with intrinsic uncertainties...

Rate this post What would the world be like if humanity vanished? This is the theme of Ray Bradbury’s story “There Will Come Soft Rains”. All of the characters in the story are devices, which through personification take the location of human characters. The style of male’s destruction resounds throughout the story. Bradbury uses personification...

Impact of the Collision of the Old and New World on Europeans, Africans, and the Indians

Rate this post The collision of the New and Old World impacted the Europeans, Africans, and Indigenous people immensely. When the two worlds were introduced to each other they set up trade routes, such as the Columbian Exchange. Although it was new for all three of them, they adjusted well to the changes over time....