Don't use plagiarized sources. Get your custom essay on
“ Spanish Settlements and Native Americans ”
Get custom paper
NEW! smart matching with writer

Known for their mantra, “Gold, Glory, God”, the main reason for their expansion was for power and wealth. In the Spanish church, the Pope decided who went to Heaven. This scared most Roman Catholics of the Spanish Empire into following the rules of the church. The Spanish ships arrived containing soldiers of the Spanish empire as well as Franciscan Friars, or priests of the Roman Catholic Church. The priests began converting Native Americans to Catholicism.

The Spanish believed that by converting the Native Americans, the natives would be saved from an eternity spent in Hell. (This belief led them to demand tribute from the Native Americans.) Due to the notion that the Pope grants entrance into heaven, King Phillip III of the Spanish Empire fulfilled any demand the head of the church had.

When the Pope insisted the Roman Catholic Church needed more money, King Phillip III made it a requirement for converted Native Americans to pay tribute to the Spanish using gold and silver bullion.

On the other hand, English settlers came to the New World to practice their religion freely. After England broke away from the Roman Catholic Church in the 1500s, The Church of England was founded and all of England was forced to belong. The Puritans did not agree with ways of the Anglican Church. After years of being punished by King Charles I for not obeying the Church of England’s rules, the Puritans came to the New World. The colonists founded the Massachusetts Bay Colony in 1629 as a way to reform parts of the Protestant religion. One major aspect of the Anglican Church that the Puritans wanted to reform was the belief that one’s actions on earth determined entrance into Heaven. The Puritans believed in predestination, a belief that God decides who will go to Heaven and Hell before birth. A Puritan’s actions on Earth were evidence of who was going to heaven. The Spanish and the English came to the New World for different reasons. The Spanish came to expand their empire through religion.

As years went on and more settlers came to America, conflicts arose. An agreement formed between Dutch settlers of New York and the English settlers of New England about the division of the Pequot lands. When no immediate decisions were reached of who would gain the land, New Englanders started to settle in the area without notice. The Pequot took this unplanned invasion as a form of attack, and fought back. After a series of attacks, New England called for reinforcements from allies. By joining forces with Plymouth and the Narragansett people, the English gained control of the lands. In Spanish settlements, the economy revolved around mercantilism. The colonies were founded to economically compliment the Spanish empire by sending all wealth back to Spain. Foreign ships were prohibited to enter Spanish ports to keep a positive balance of trade. On the other side of the New World, the English colony of Plymouth initially set up a communal society.

The entire community shared the land and helped farm. This later proved to be unsuccessful, and the land was divided up. In New England, farming was possible, but not particularly successful. The rocky soil and short growing season made growing the majority of crops difficult. The English settlers found the most profit in fishing and large trading ships. Since the colonists of New England were independent, from England, all profit made from farming and fishing stayed in the colonies. The Spanish and English battled with Native Americans of the Southwest and New England. The Spanish settlers, coming from a large empire, already had the taste for conquering other nations. Defeating cultures was a foreign concept to the people of New England. Their humble victory over the Pequot people resulted in unexpected success. The Spanish and English had similar economies with major differences. The Spanish economy was based on mercantilism. 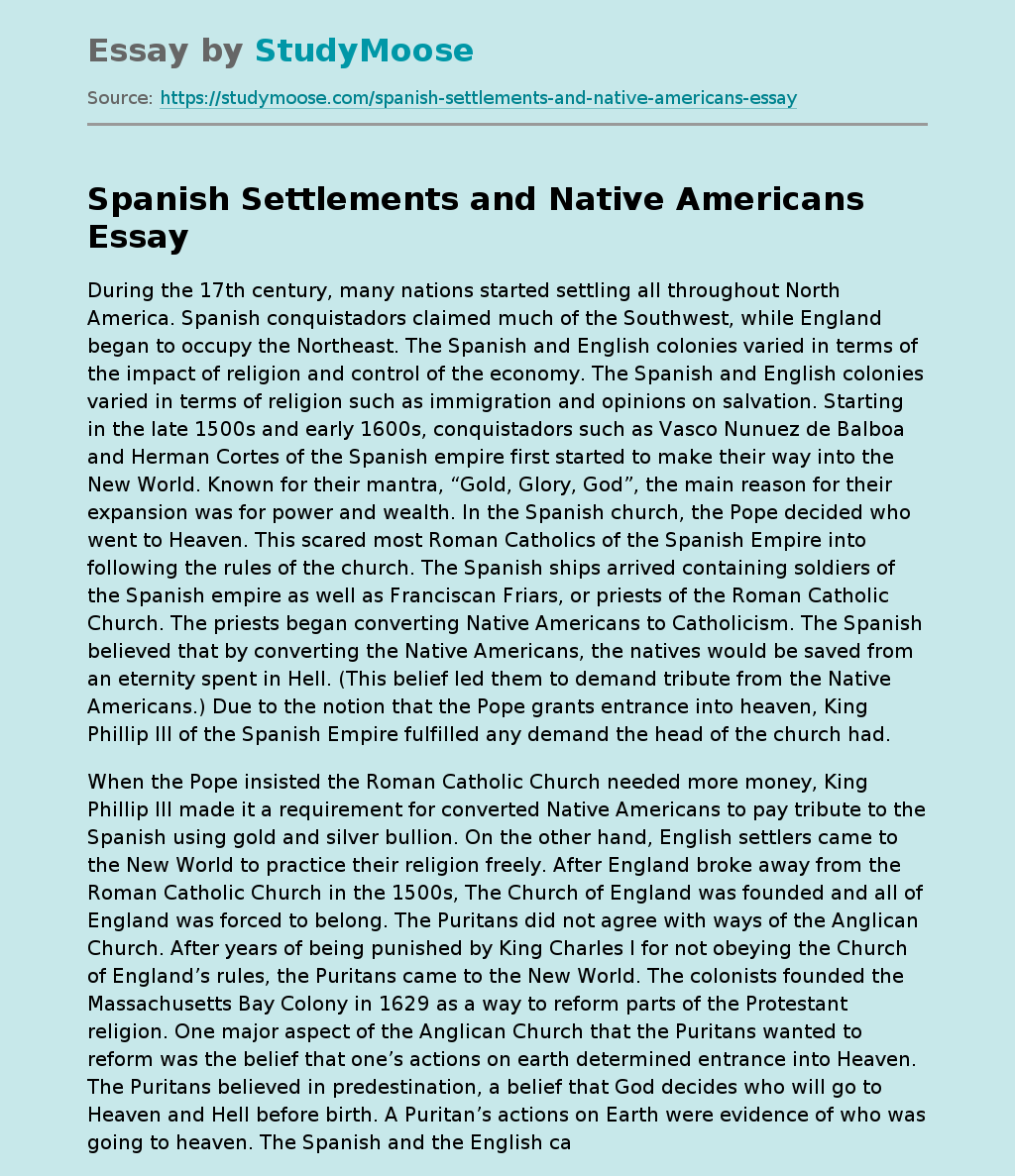