Don't use plagiarized sources. Get your custom essay on
“ Spanish Nationalism ”
Get custom paper
NEW! smart matching with writer

[3] The development of Spanish nationalism has been tied to the state-building process of the Castillian-ruled Spanish monarchy. Just as in all other Western European nation-states (Portugal, France and England), the shaping of an authoritarian monarchy as of the late Middle Ages gave rise to the parallel secular development of the State and Nation in Spain under the Spanish Monarchy’s successive territorial conformations.

As occurred in each one of these cases, the national identity and the territorial structure proper gave rise to many different outcomes in the end, but always – and also in the case of Spain – as a result of the way in which the institutions responded to the economic and social dynamic (at times despite these very institutions) and not fully flourishing in their contemporary aspect until the Old Regime had succumbed.

The clearest-cut identification factor existed throughout this ethnic-religious period in the form of “Old Christian” status. At the end of this period (18th century), the linguistic identification factor was gradually accentuated revolving around the Castilian with new institutions such as the Spanish Royal Academy.

Historically, Spanish nationalism emerged with liberalism, and in the Spanish War of Independence against Napoleon I of France. Since 1808 we can talk about nationalism in Spain: ethnic patriotism became fully national, at least among the elite. This was unmistekabily the work of liberals. The modernizing elites used the occasion to try to impose a programme of social and political changes, and the method was to launch the revolutionary idea of the nation as the holder of sovereignty.

The national myth was mobilising against a foreign army and againstcollaborationist with José Bonaparte, regarded as non-Spanish (afrancesados). The Spanish liberals resorted to the identification between patriotism and the defense of liberty: as the Asturian deputy Agustín Argüelles while presented the Constitution of 1812, “Spaniards, you now have a homeland.” Since then, it has often changed its contents and its ideological and political proposals: successively doceañista, esparterista, even briefly iberista(advocating union with Portugal in the dynastic crisis of 1868).

The Carlism, who was a defensive movement of Old Regime, did not regard the adjective “national” with any esteem (national sovereignty, National Guard national properties… were the vocabulary of liberals, particularly since moreprogresistas). However, the Spanish nationalism that demonstrated to be decisive in the twentieth century came from the frustration due to the disaster of 1898, that has been called regenerationism, claimed from movements very opposite one another: the ruling bourbon-dynastics (Francisco Silvela,Eduardo Dato, Antonio Maura), the republican opposition (that only had a contradictory and brief stay in power) and even the army (1917 crisis and dictatorships of Miguel Primo de Rivera and Francisco Franco).

Specifically, under the name of panhispanism (more properly referred to a movement focused on the unity of hispanoamerican nations) understood as Spanish imperialism, it is used to refer specifically the movement emerged after the crisis of 1898, within the broader context that included theregeneracionism and the generation of 98 (whose authors, coming from the Spanish periphery, agreed to consider Castile the expression of “the Spanish”), expressed in its more clear way by the second phase of Ramiro de Maeztu. Its ideologues and politicians were Ramiro Ledesma andOnésimo Redondo (founders of the JONS) and José Antonio Primo de Rivera (founder of Falange); using an expression that has its origins in José Ortega y Gasset, defines Spain as a unity of destiny in the universal, defending a return to traditional and spiritual values of Imperial Spain.

The idea ofempire makes it universalist rather than localist, what makes it singular among certain nationalisms, but closer to others (especially the Italian fascism). It also incorporates a component resolutely traditionalist (with notable exceptions such as the vanguardism of Ernesto Giménez Caballero), rooted in a millennial history: that of traditional monarchy or Catholic Monarchy (although often is indifferent on the specific form of state) and, most importantly, it is not lay or secular, but expressly Roman Catholic, which will define (in the first franquism) the term National Catholicism.

The political transition which, together with social and economic changes in a profound sense of modernisation, was brewing since last franquism until the building of the current institutions (Spanish Constitution of 1978 and Statutes of Autonomy), produced a very sharp reversal of the social use of Spanish symbols of national identification, while peripheral nationalisms acquired a significant presence and territorial power, which becomes electorally majoritary in Catalonia (Convergence and Union, Republican Left of Catalonia) and Basque Country (Basque Nationalist Party, EA and so-called abertzale left) and substantially lower in Navarre (Nabai) and Galicia (Galician National Bloc). Canary Islands (Coalición Canaria), Andalusia(Partido Andalucista) or other autonomous communities have less obvious nationalisms (often described as regionalisms), based on linguistic or historical differential facts no less marked than the previous ones.

From the field of peripheral nationalism, is often speak of “Spanish nationalism” or españolismo as equivalent to centralism, usually with a controversial political purpose, for identifying it with the conservative nostalgic for Franco’s regime or with an alleged oppression from state on those territories, which in extreme cases (particularly ETA in Basque Country and Navarre) is used as justification for terrorism that sees itself as armed struggle for national liberation. By contrast, none of the major political parties affected by such designation of españolistas or “Spanish nationalists”, self-identifies as such and often, instead, use the phrase non-nationalist to separate themselves from the nationalist, which is how they usually designate the so-called “periphery”.

From the majority point of view, in social, territorial and electoral terms,] the identification with Spain, its symbols and institutions has become more characteristic of constitutional patriotism or civic nationalism. which seeks to respect the different visions of Spain fits in a pluralistic framework,inclusive and non-exclusive, concepts in which often coincide the majority political parties (Spanish Socialist Workers’ Party and People’s Party) or minority (United Left, Union, Progress and Democracy, other regional parties or nationalist parties sometimes called moderated), despite maintaining deep political differences sometimes expressed in a very strong way. 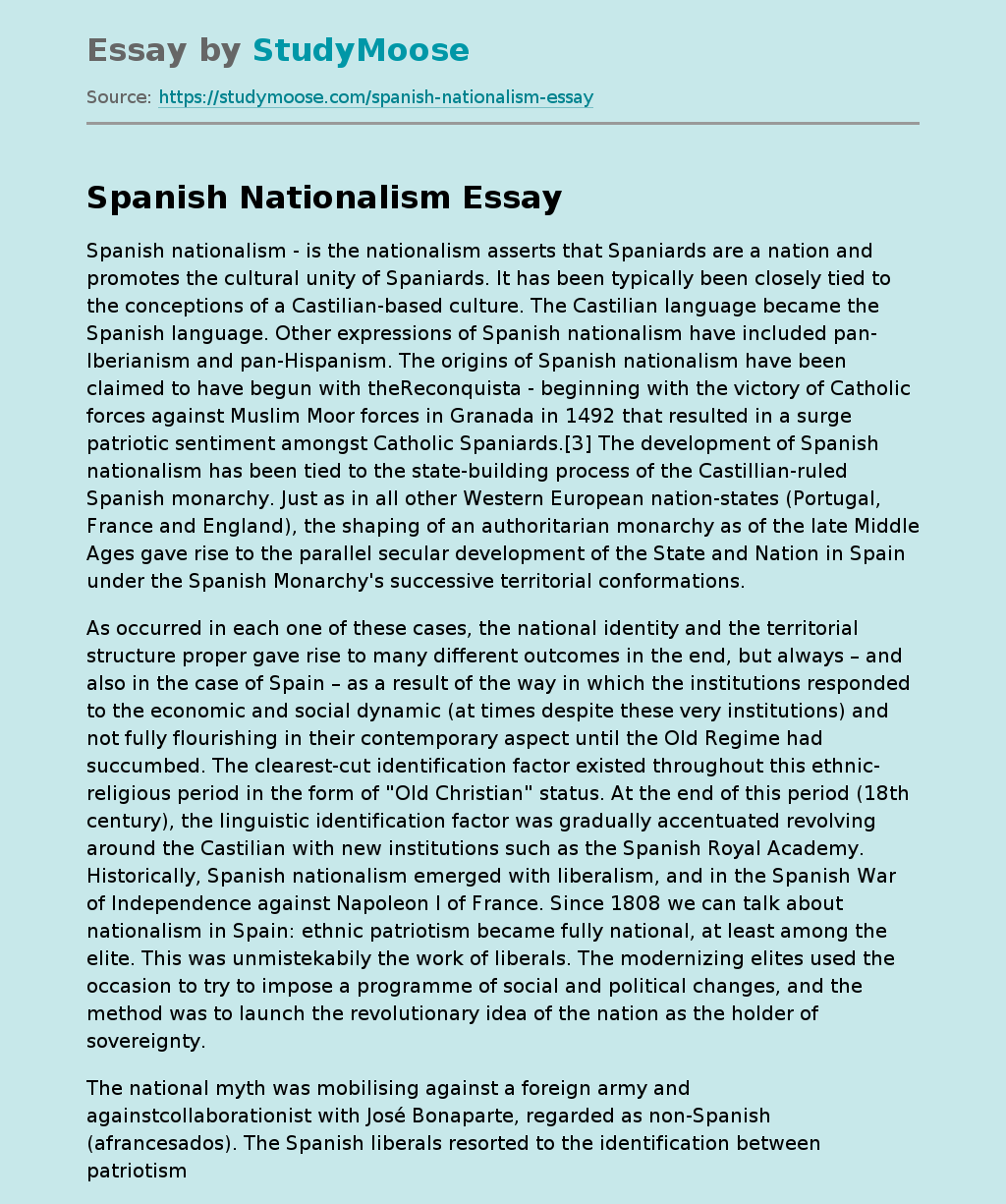