1.What religious turmoil in the Old World resulted in the little colony of Plymouth in the New World? 2.Why was the initial and subsequent colonization of the Massachusetts Bay Colony more successful than Plymouth? 3.How did the colony of Plymouth and Massachusetts Bay Colony contribute to the origins of American independence and government? What were the contributions to American independence and government from the New England Confederation, the Dominion of New England, and the Glorious Revolution? 4.What role did religious intolerance play in the founding of New England colonies other than Plymouth and Massachusetts Bay and in the founding of some middle colonies? 5.

Don't use plagiarized sources. Get your custom essay on
“ Spanish colonizators ”
Get custom paper
NEW! smart matching with writer

Theme: Religious and political turmoil in England shaped settlement in New England and the middle colonies. Religious persecution in England pushed the Separatists into Plymouth and Quakers into Pennsylvania.

England’s Glorious Revolution also prompted changes in the colonies. Theme: The Protestant Reformation, in its English Calvinist (Reformed) version, provided the major impetus and leadership for the settlement of New England.

The New England colonies developed a fairly homogeneous social order based on religion and semi-communal family and town settlements. Theme: Principles of American government developed in New England with the beginnings of written constitutions (Mayflower Compact and Massachusetts’s royal charter) and with glimpses of self-rule seen in town hall meetings, the New England Confederation, and colonial opposition to the Dominion of New England. Theme: The middle colonies of New Netherland (New York), Pennsylvania, New Jersey, and Delaware developed with far greater political, ethnic, religious, and social diversity, and they represented a more cosmopolitan middle ground between the tightly knit New England towns and the scattered, hierarchical plantation in the South.

chapter summary
The New England colonies were founded by English Puritans. While most Puritans sought to purify the Church of England from within, and not to break away from it, a small group of Separatists—the Pilgrims—founded the first small, pious Plymouth Colony in New England. More important was the larger group of nonseparating Puritans, led by John Winthrop, who founded the Massachusetts Bay Colony as part of the great migration of Puritans fleeing persecution in England in the 1630s. A strong sense of common purpose among the first settlers shaped the Massachusetts Bay Colony. Because of the close alignment of religion and politics in the colony, those who challenged religious orthodoxy, among them Anne Hutchinson and Roger Williams, were considered guilty of sedition and driven out of Massachusetts.

The banished Williams founded Rhode Island, by far, the most religiously and politically tolerant of the colonies. Other New England settlements, all originating in Massachusetts Bay, were established in Connecticut, Maine, and New Hampshire. Although they shared a common way of life, the New England colonies developed with a substantial degree of independence. The middle colonies took shape quite differently. New York, founded as New Netherland by the Dutch and later conquered by England, was economically and ethnically diverse, socially hierarchical, and politically quarrelsome. Pennsylvania, founded as a Quaker haven by William Penn, also attracted an economically ambitious and politically troublesome population of diverse ethnic groups. With their economic variety, ethnic diversity, and political factionalism, the middle colonies were the most typically American of England’s thirteen Atlantic seaboard colonies.

DIRECTIONS: For each of the below individuals write a one paragraph description of the individual’s historical significance.

1.Did the Puritans really come to America seeking religious freedom? How did they reconcile their own religious dissent from the Church of England with their persecution of dissenters like Hutchinson and Williams? Does their outlook make them hypocrites? 2.How were government and religion—or church and state—related in New England and the middle colonies? How does the colonial view of these matters compare with more recent understandings?

3.Was an American Revolution, separating the colonies from England, inevitable after the Glorious Revolution had encouraged colonists to end the Dominion of New England, England’s serious attempt at enforcing royal authority? Did England’s “salutary neglect” contribute to future problems in its empire? How might have England been able to successfully enforce its rule on the colonies without causing rebellion? 4.Dutch colonization efforts in New Amsterdam most closely resembled English colonization efforts in which region: New England, the middle colonies, or the southern colonies?

The Dutch had a powerful presence in the East Indies, so why were the Dutch less successful in the West Indies and North America? What is the lasting influence of the Dutch in English North America? 5.How does the founding of the New England colonies compare with the origin of the middle colonies? In what ways were New England and the middle colonies each like the South, and in what ways were they different? 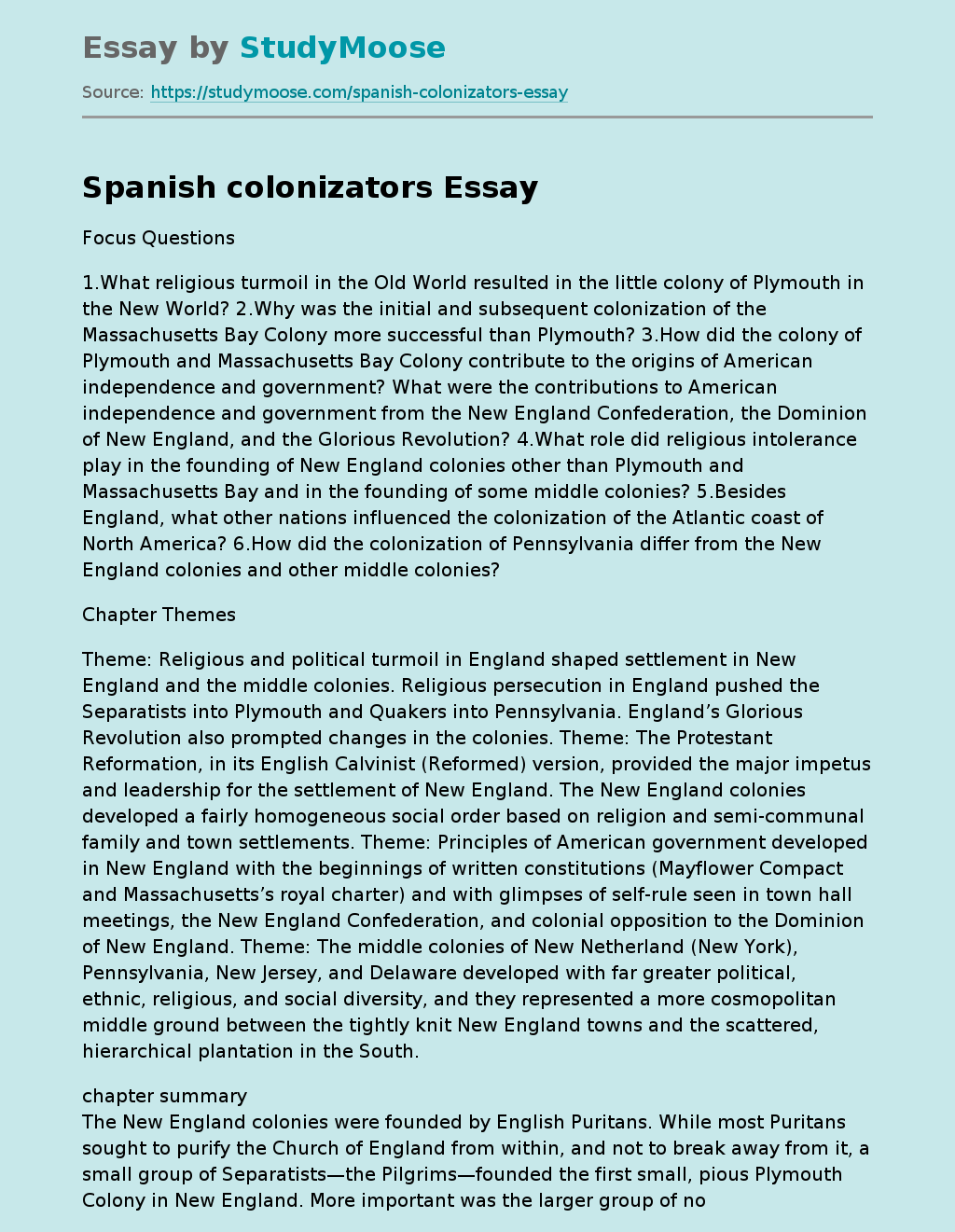