Sorry for Disturbing You - short story

Sorry for Disturbing You is a short story written by Richard Knight and its main theme is regretting some of the choices made in life. Two guys are regretting things in this story – an old man called Michael and Ian, who is also the main character. Michael is an old sick man one night knocking at Ian’s door asking for a phone to call for a cap. Ian doesn’t feel like letting him in, but he follows his instinct and finally lets him in to help him.

Don't use plagiarized sources. Get your custom essay on
“ Sorry for Disturbing You – short story ”
Get custom paper
NEW! smart matching with writer

Ian following his instinct turned out to be a good thing, because letting Michael made Ian change The story is told by a third person limited narrator, as it is only Ian’s thought that appears in the text. So reading this story Ian is our eyes and ears. Every description is given to us by his point of view, which means that the impression of the characters that we get is affected by what Ian’s thoughts of these people.

Proficient in: A Gap Of Sky

The fact that the narrator is a limited narrator, also has the effect that Ian can only be described by his thoughts and the few dialogues that he has.

The story is told in present tense and its progress is chronological. The language consists of a few comparisons as like a newborn child. The story is a short story which is also confirmed when reading it as it has a lot of the novel genre’s characteristics – there’s only four important persons in the story, there’s no long descriptions and flashbacks either.

The story only covers a couple of hours. And as in fairytales it the short story has a frame.

The story starts with Ian being home and having his wife Karen living at her mother’s house and his life is being all messed up, but then Michael comes knocking on his door and he brings him through a mental journey – Michael teaches him something. And in the end Ian is back and suddenly he has a brighter future – He is home, goes out and ends up home again but as a different guy. When Michael comes knocking on Ian’s door he is drunk and sick and needs a phone to call a cap. Ian doubts in letting him in, but does it anyway.

Inside the house Michael starts talking about him not being allowed to come to his own daughter’s wedding and he spends times looking at a photo of him, his daughter and wife hanging on Ian’s wall. So it seems like he’s is really missing his daughter. Michael is also a little mysterious, because when someone comes knocking on ones door to burrow a phone, they usually don’t have a phone, but Michael has one and insists on calling from it. And when calling the cap company Michael knows the address as if it was his own.

But the puzzle comes right when Michael tells Ian that he knew the old owners of the house and that is why he knows the address and about the old owners he says; We were friends. Good friends. I liked George very much. So it seems like it is not just a coincidence that Michael knocked on Ian’s door. He is probably missing his old life, his friends and family and came to Ian’s place to remember his life as it was before. Michael is a man filled with regrets and he keeps apologizing and saying I should’ve and I shouldn’t have; Im sorry, I… and Sorry. Thank you.

You are very kind. Ian is the main character of the story. He is the father to a little girl called Corrine and he is married to Karen, but they have problems which need to be sorted out. Ian and his wife probably have problems because they don’t communicate like they should do. And he also has a bad relationship to his daughter Corrine. Several times Ian tells his daughter to stay in her room, but she doesn’t behave rapidly. He’s a bad communicator because even though Corrine is around throughout the whole story, they don’t run one single conversation.

And the same goes to his wife – when he sees her in the end of the story he only sends her a nod, even though he clearly has missed her; Ian thought of Karen at her mum’s, and wished she were here now. And he doesn’t know what to speak with Michael about either; Ten minutes, Ian thought. What the hell am I supposed to talk about for ten minutes? Michael can be symbolized as being a picture of Ian’s future, because they both have a family and a member of it that they do not speak to and miss. But Michael’s situation is worse – he has become an alcoholic.

Ian can still save his relationship to his wife and Michael has been an eye-opener to Ian, because when Ian comes home after driving Michael to the hospital, he’s a different man and wants to sort things out. He comes home and he makes two cups of tea and warms a glass of milk. The two cups of tea probably is for him and Karen and is therefore representing him and Karen. And the milk is representing his daughter. … made two cups of tea and a glass of warm milk, and took the first careful steps up the stairs.

Carrying the drinks upstairs he’s being careful, as if he was afraid to drop the drinks – to lose his wife and daughter. And him taking the first steps up the stairs can be symbolized as being the first steps into his new life. Ian knows now how much his family really means to him and meeting Michael made him change, because he doesn’t want to end up lonely and being kept out from his own daughter’s wedding. Throughout the story Ian became a different person – Michael saved Ian’s future, so he was definitely not disturbing, as he said in the beginning when Ian first opened the door; Sorry for disturbing you.

Sorry for Disturbing You - short story. (2017, Mar 13). Retrieved from https://studymoose.com/sorry-for-disturbing-you-short-story-essay 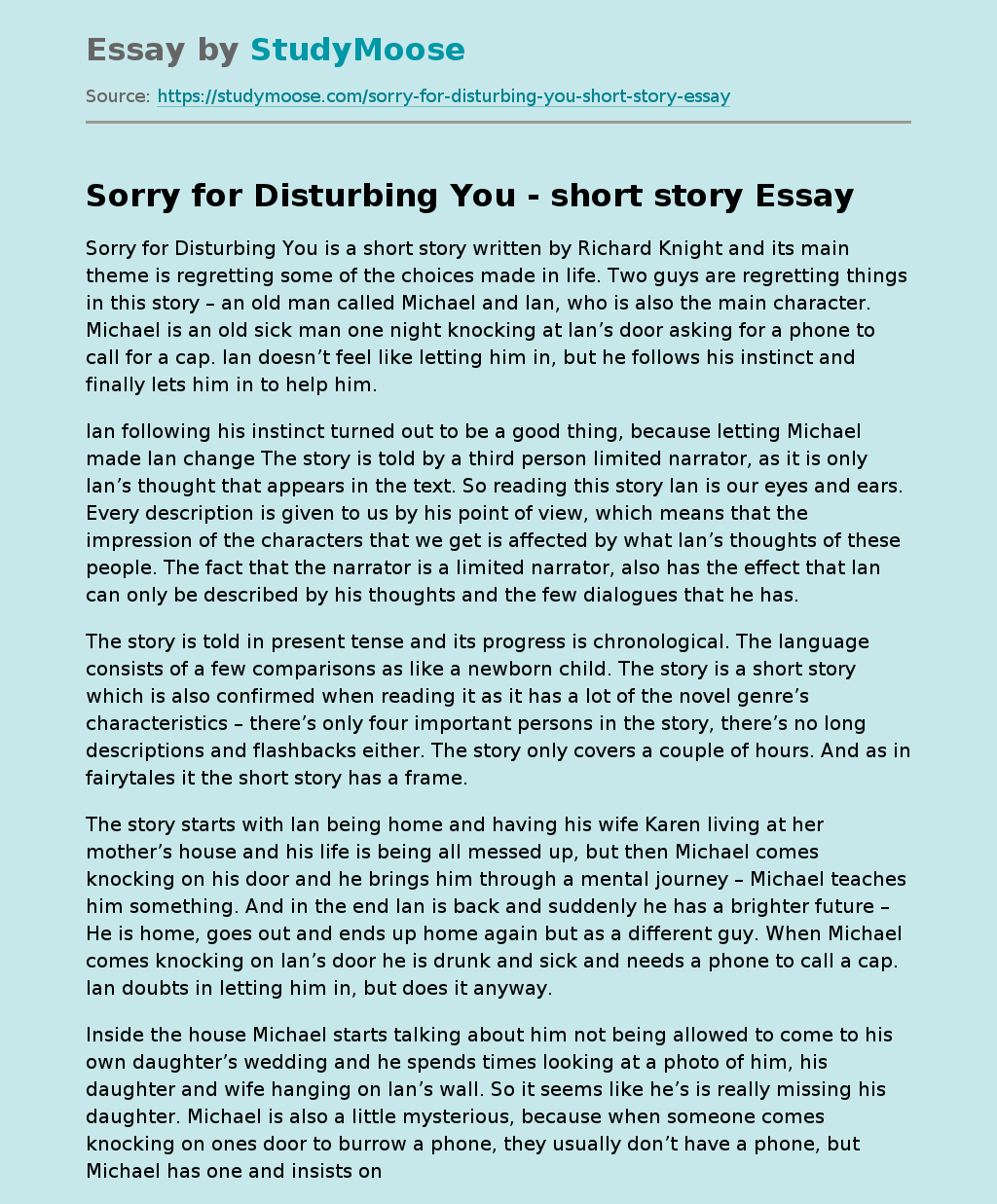