Sorry for Disturbing You by Richard Knight: Short Story Analysis

Life is about many things. Some would say friendship is gold, others that money talks. But one main thing that many people isn’t listing that high, is communication. We have the ability to talk and express what we feel. That can be the key to loving relationships and a happy life, if handled correctly. But if one is not able to express those feelings, and not able to obtain intimacy with someone else it will lead to loneliness. The short story “Sorry for Disturbing You” is written by Richard Knight and is dealing with the importance of communication.

Don't use plagiarized sources. Get your custom essay on
“ Sorry for Disturbing You by Richard Knight: Short Story Analysis ”
Get custom paper
NEW! smart matching with writer

It is about a meeting between two men that seem different but really may not be that different after all. The story begins with the main character, Ian, reflecting and looking back upon his meeting with Michael Phelps. After that the story is chronologically built and is stretching across a couple of hours. The story is told by a third person narrator with a view inside of Ian’s head.

There is no outer description of Ian and our portrait of Michael is painted by Ian’s view of him and how he appears to be through the dialogue.

Ian sees Michael as a helpless and possibly an alcoholic person: “He seemed lost, hanging on to the doorframe for support” (l. 4) “He looked ill. Or very drunk. ” (l. 11) Michael is also compared to “a sobbing child” (l. 55) and “a helpless foal” (l. 87) to emphasize the state he is in. There is something inside of Ian, reaching out for Michael.

He really didn’t want to let him in but still he did, because of his instincts telling him to. The same with starting a conversation with him. He still have some reluctance against Michael being in his house, so he finds him a chair that is “not too comfortable” (l. 6) It seems, through the dialogue, that Ian is not the best of communicators.

For example: “What the hell am I supposed to talk about for ten minutes? ” (l. 52) He don’t know what to do about Michael and even less what to talk to him about. Michael is a mysterious man. There are hints that Michael may have an alcohol problem, since he seems drunk, he has a social worker and the fact that the taxi driver refuses to drive him home. He is rejected from society and he is not on good terms with his daughter.

“’Twenty-two years. ‘ The answer came immediately, like a time tables answer. (l. 73) The reason for his relationship to his daughter is suggested in this sentence. The reason might have been an event, something he was responsible of. Michael is a lonely man filled with so much regret it spills out in the form of tears. He is looking a lot at the photograph of Karen and Corinne, while he’s probably thinking about his daughter and his family he no longer is in contact with. Karen and Corinne is not take up much space in the story but their absence are taking up a lot of space in Ian’s mind. When he think about Karen he gets a bit confused and ignorant.

He is wondering how she would react to the whole thing but is not sure. He wants Karen to be there but he doesn’t call her until the very end, as the very last way of getting Michael out of the house. In that way it’s because of Michael that Ian contacts his wife. What starts out as being a disturbance of Ian’s evening ends up being a help to him, because the communication between Ian and his wife was in a very bad condition. Suddenly the title of the short story has a different meaning than before. The meeting with Michael have definitely changed something inside Ian.

When opening the door for Michael in the beginning of the story, the first thing he sees is the “icy rain running in beads down the man’s face” (l. 1). But when he is looking back on the whole thing he is “no longer sure if it had been rain or tears” (l. 2) and the fact that he is now looking differently at the situation than he first did is showing that he have changed. When he met Michael it gave him a chance to reach out to Karen and to reflect on his own life. He realizes just how important family is and that he have to make an effort communicating with his wife and daughter.

A physical example of Michael’s great impact on Ian is when he grips Ian’s hand in the end, and holds it for a long time. The very last sentence of the short story: “He switched the television off, made two cups of tea and a glass of warm milk, and took the first careful steps up the stairs” (l. 171) shows that he is now quitting his former passiveness and is taking action so he won’t lose the people he loves. Unfortunately, Michael is an example of many people across the world. It is sad, but you can only learn from this short story. It have a very strong morale: communicating is important. 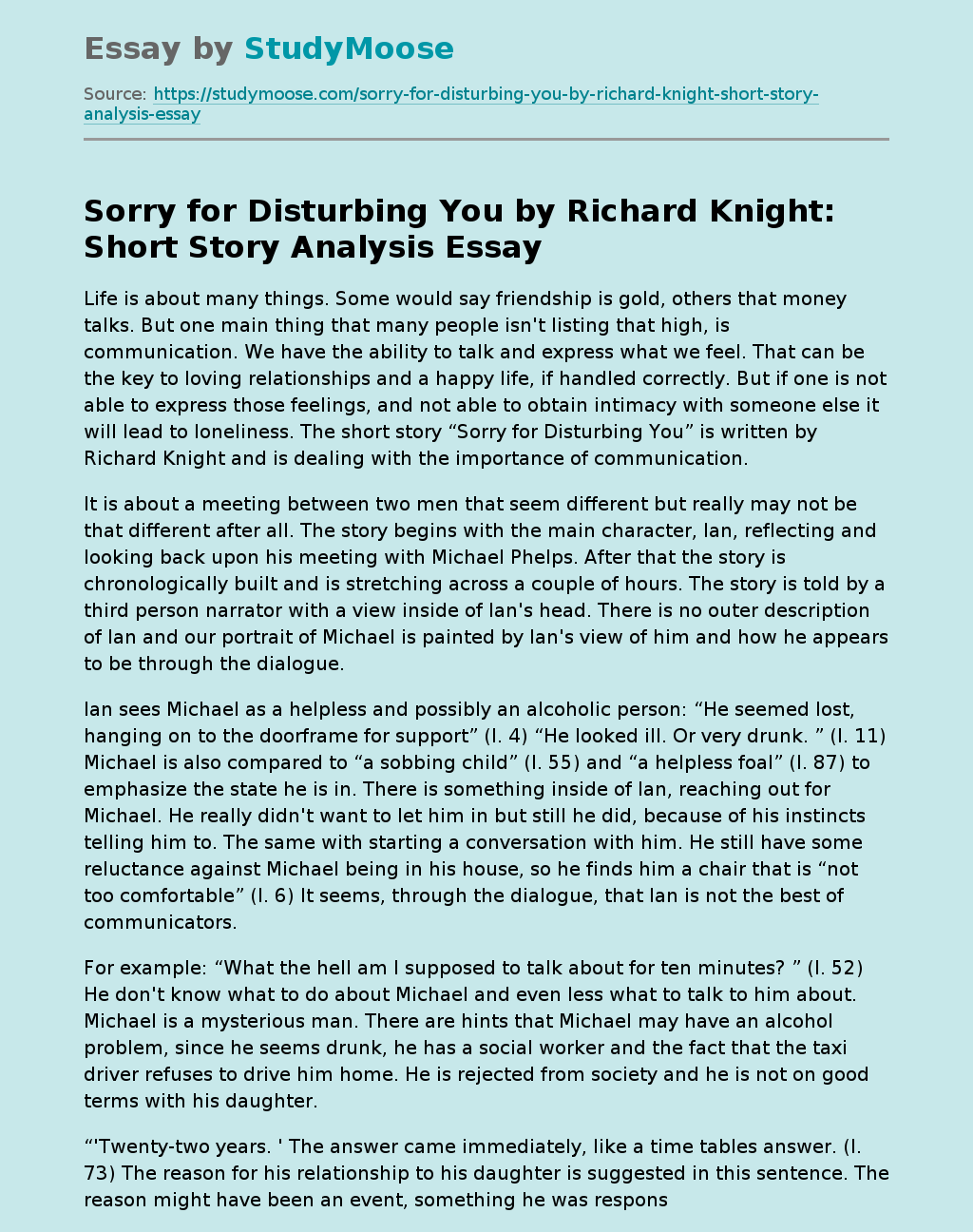