Sony Corporation’s full name is Sonī Kabushiki Gaisha, commonly referred to as Sony, is a Japanese multinational conglomerate corporation headquartered in Kōnan Minato, Tokyo, Japan. Its diversified business is primarily focused on the electronics, game, entertainment and financial services sectors. The company is one of the leading manufacturers of electronic products for the consumer and professional markets. Sony is ranked 87th on the 2012 list of Fortune Global 500. Sony Corporation is the electronics business unit and the parent company of the Sony Group, which is engaged in business through its four operating segments – Electronics (including video games, network services and medical business), motion pictures, music and financial services.

Get a verified writer to help you with Sony Corporation

The founder of Sony is Akio Morita and Masaru Ibuka. They have their companies based all around the world. They made a net income of 458million this year. This is a miniscule amount compared to what they usually make being of a major loss they have recently suffered and are still trying to recover from. Usually their net income goes up into the billions of dollars. Therefore, to expedite this process, I have decided to make a marketing strategy for this company.

Sony makes various amount of products, so their products should be marketed in various different ways. First of all, cable TV is a efficient way of advertising. They could market almost everything from TV sets to phones and the services that they provide. They are a very reputable company that has suffered a great loss over the last few years in their television series, which is what they need the most help with now. Samsung had been producing the latest chips that are placed into TVs and Sony had been purchasing them to as a second dealer. Samsung being the original creator of these chips, can place them into their TVs for a cheaper rate. Sony, on the other hand, have to raise the price of their products and could not compete with the low costs. Thus, Samsung have outwitted them and taken them entirely out of the competition for that year.

Now Sony must make a comeback with newer technology and better graphic cards to compete with the ever increasing market. Sony should market their products to people with substancial financial standing, they have maintained a consistent quality amongst their products which raises their standards to above average. People looking for quality over everything will find their products to be perfect. Sony made various mistakes within the last decade of buying hardware when they were suppose to create their own and not keeping their software up to date. This corporation has gotten uncreative and lazy as the new generation took over the corporation. The best option for this company would be to change the creative director, lower the costs and update their software in order to be able to compete with the current market again.

The internet would be an ideal place for advertising electronic media as it is cheap and provides features like price comparisons and the latest updates. Sony Erikson phones are doing well in the market, having adopted the Android operating system, therefore they do not need much market strategy to promote their products in that department. The television series rely on a long term loyal customer base, that maybe do not know the inside information and could make their decision just by choice. Customers that are looking for a new TV and choose according to price might be harder to persuade. The best market strategy would be to do promotions and lower their pricing on the internet in order to compete with the current competition. Cable Tv like Astro would be another good choice to where they should promote their products.

Families looking to expand their home entertainment or children would be attracted to facilities such as this. This would include catalog advertisement where they could see the product on Tv and could get a glimpse of the actual experience while being able to browse and analyse the details for themselves. Cinemas are a must for everyday advertising. Though advertisements flash before our eyes and we forget about them on a daily basis, creative advertisements stick to us. Sony should use the cinema screens to show the image quality of their televisions and phones, sound quality can be promoted as well for their sound systems and other products. At shops, we are able to test television sets for ourselves with helpful sales representatives to recommend the best one suited to our budget and desires.

According to the competition, Samsung has been leading most recently, outsmarting the Sony corporation. LG ranking in second leaving Sony in third. All of these companies have well spoken names with an ever increasing need for improvement. Samsung, having sold their technology to the Sony corporation, leaves Sony in a dismantled state. Samsung has advantage in this, they can sell their things for cheaper price and same quality. Samsung has a good software, that keep them on the top. Samsung also stand as the first company that create HD 3D LED quality of television. For the design Samsung also won in eight catagories in 2009, and won with the most Award in IDEA. On the other hand, Sony has their own entertainment such as Playstion. They keep udptaing and improving the technology. Playstation from Sony is at the top entertaining video game.

Sony itself produce a computer product known as VAIO or Video Audio Integrated Operation. But in computing Samsung is still better than Sony. For the camera and speaker Sony is better than Samsung, but for the software and the convinience of the user, Samsung is far better. As we can see, they’re more advertising for Sony than Samsung, but Samsung has net profit that goes up into the trilions annually.

LG itself doing very good at elektronik such as the TV, Air Conditioner. They have their own fan, and they selling the product with the quality, even the design is not their main purpose. LG has their own mobile phone, but not as good as their other elektronic product. In comparison to Sony, LG cannot compete with their overall capabilities, but because of the losses Sony has suffered recently, LG has a far better net profit.

According to the popular beliefs of the public, most still think that Sony is an upstanding brand. Their phones are ever so popular in the market, and most are not aware that they have financial problems. Their good name has not been tarnished because the general population does not probe that deep when enquiring about the latest electronic technology. However, most are aware that Samsung has provided them with a sufficient competition that keeps this company on its toes. Samsung rivals this company far better than the LG company. The mass audience, when surveyed, responded to having purchased Samsung products over having purchased LG goods. Sony retains its good reputation, as I have personally hear people recommend to me of their good quality for money of merchandise such as headphones, speakers, phones and much more. Maybe because the consumers are more focused on the latest phone and tablet updates, most do not focus on the latest television that comes out because that is usually a once in a life time purchase. Overall, Sony maintains a good audience feedback.

Get a verified writer to help you with Sony Corporation 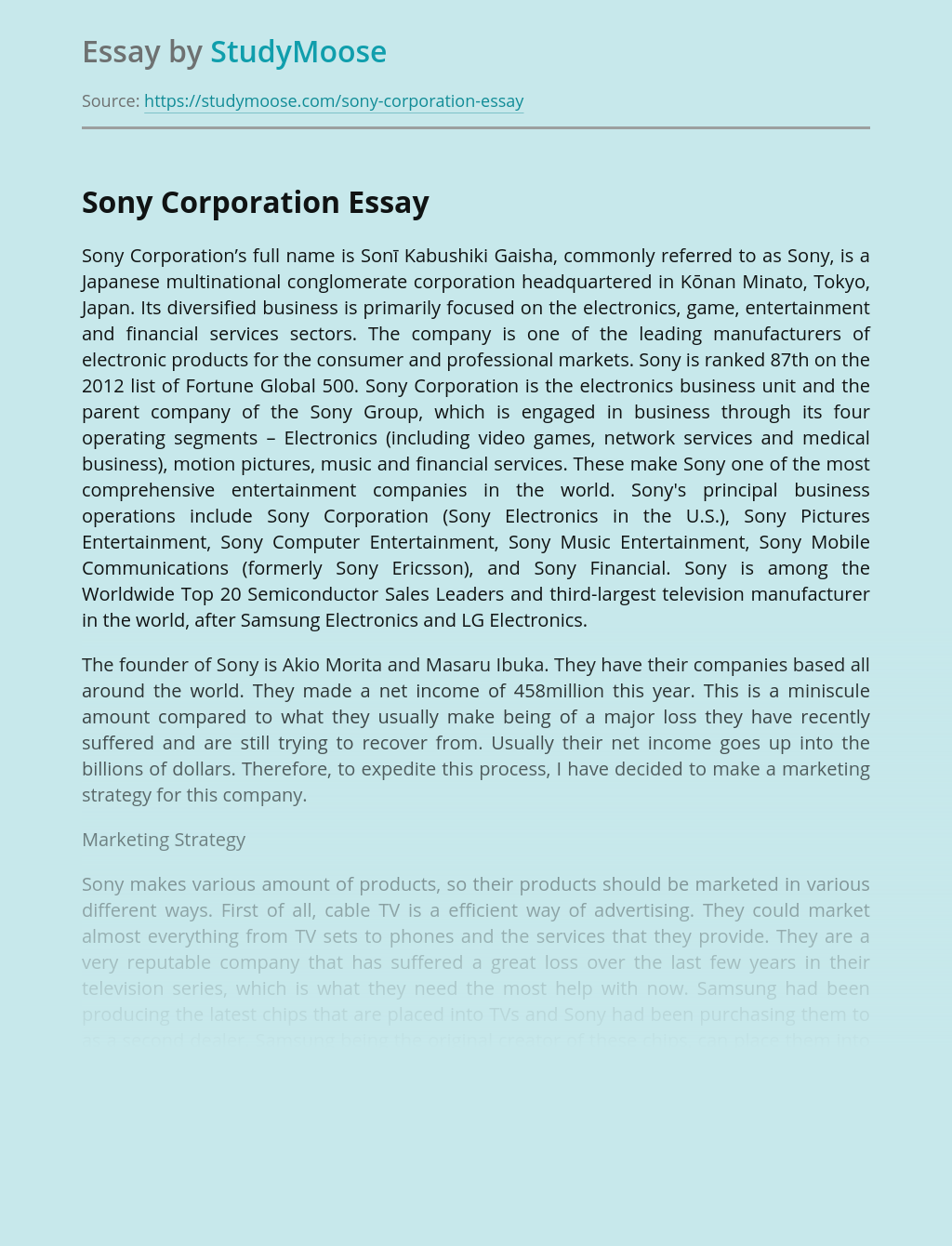 Is Samsung Mobile Business Model sustainable in China facing the growing Chinese competitors ? “Change everything except your wives and kids” Lee Keun-Hee, CEO of Samsung group in 1993 after he visited an electronic store and saw Samsung products gathering dust behind Sony and Panasonic products. Introduction : Why did I choose this subject ?...

1. Introduction to ZTE Lanka (PVT) LTD ZTE Corporation (Zhōngxìng Telecom Equipments) is a leading global provider of telecommunications equipment and network solutions. Through its network of operators across 140 countries, the company delivers innovative products and business solutions. The major customers are the telecom operators in Asia Pacific, South Asia, North America, Europe and...

Business, government and society– all 3 are inter-related with each other. Things remain the same for all companies. Robi is not different from that. Govt. is a system through which policies and guidelines are made and executed for the society. Society is a network of human relation. Customer of an item originates from the society...

The Effects of Headphones

Cross-cultural marketing can be defined as the effort to determine to what extent the consumers of two or more nations are similar or different. In order for marketers to become successful, they must understand the psychological, social, and cultural aspects of foreign consumers that they wish to target. Marketers must focus on the differences between...

What Mobile Phone Addiction Can Do? Just like an old saying, introduced by Roman philosopher Seneca, To be anywhere isto be nowhere (196). Nowadays, the smartphones and internet provide everyone anaccess to obtain information around the world without walking out of the house. However, reflected by the growing number of people who own one or...