The “Somebody-Wanted-But-So” chart is an excellent way to summarize important information from history. In it, you identify a person or group of people; their goal, need, or want; what conflict of interest stood in the way; and the outcome. This strategy works great because history depends on the needs, wants, and actions of humans.

Part 1 – Complete the following chart using information from the lesson. One example appears for you.

Wanted: the nation to heal as quickly as possible from the Civil War and planned to reunify the nation quickly But: he was assassinated in 1865 only days after Robert E.

Turn in your highest-quality paper
Get a qualified writer to help you with
“ Somebody-Wanted-But-So Persona Abraham Lincoln ”
Get high-quality paper
NEW! AI matching with writer

Wanted: He wanted the same thing President Lincoln wanted except Johnson had patience. But: He vetoed laws, and then were overridden by the Congres and was impeached in early 1868, was the first impeachment of a U.

S. President. So: The Radical Republicans began what was called the Radical Reconstruction.

Somebody: Radical Republicans
Wanted: The Southern States and former Confederates to be severly punished if wanted to unify back with the Union.Also to make sure that slavery was abolished in the southern states. But: The Reconstruction ended when President Hayes was elected in office, he removed the remaining federal troops in the Southern States to win the elecotorials. So: Federal protection was over for pro-Republicans, African American Voters, and freedmen.

Somebody: Southern Democrats
Wanted: They wanted the federal troops of the North to leave and stay out of “state” buiesness But: But when the south lost in the Civil War, the North came into their territory as an oppsing force.

Which was what the southern states didnt want to begin with. So: The reconstruction did work during its time, but as soon as the South got their way when Hayes was elected, it technically failed, Therefore i believe that the reconstruction was pointless, its very important, but only accomplished little.

Part 2 – Answer the following questions in a complete paragraph of your own words.

What was the main issue relating to Reconstruction that divided Republicans at the end of the Civil War? If you had been a member of Congress at the time, what type of plan for Reconstruction would you have supported and why?

1) The main issue/reason that the major disparity between the Radical Republicans and the Moderate Republicans (like Lincoln), was that the radicals demanded many changes that include civil rights for freedmen, abolition of slavery, and harsh consequences on former Confederates (e.g. those involved in local govts). However Radicals managed to come up with a “Reconstrustion” program which majority of Congress agreed to, but Lincoln quickly pocket vetoed the Act in 1864. Lincoln and other Moderate Republicans sought for gradual change without upsetting the balance of the Union and tried to avoid excessive punishment of former Confederates and planned to re-compensate those whose slaves where liberated.

2) If I had been a member of Congress of the time, I would have actually not have brought up another reconstruction act, but actually take side with the Moderate Republicans. The reason being is that i would want to unify the states as friendly and nicley as possible so that way both sides can unite peacefully, rather than hurting or punishing the south severly and they would then somewhat resist to join the Union. So therefore I would agree with what Lincoln tried to enact in the first place. 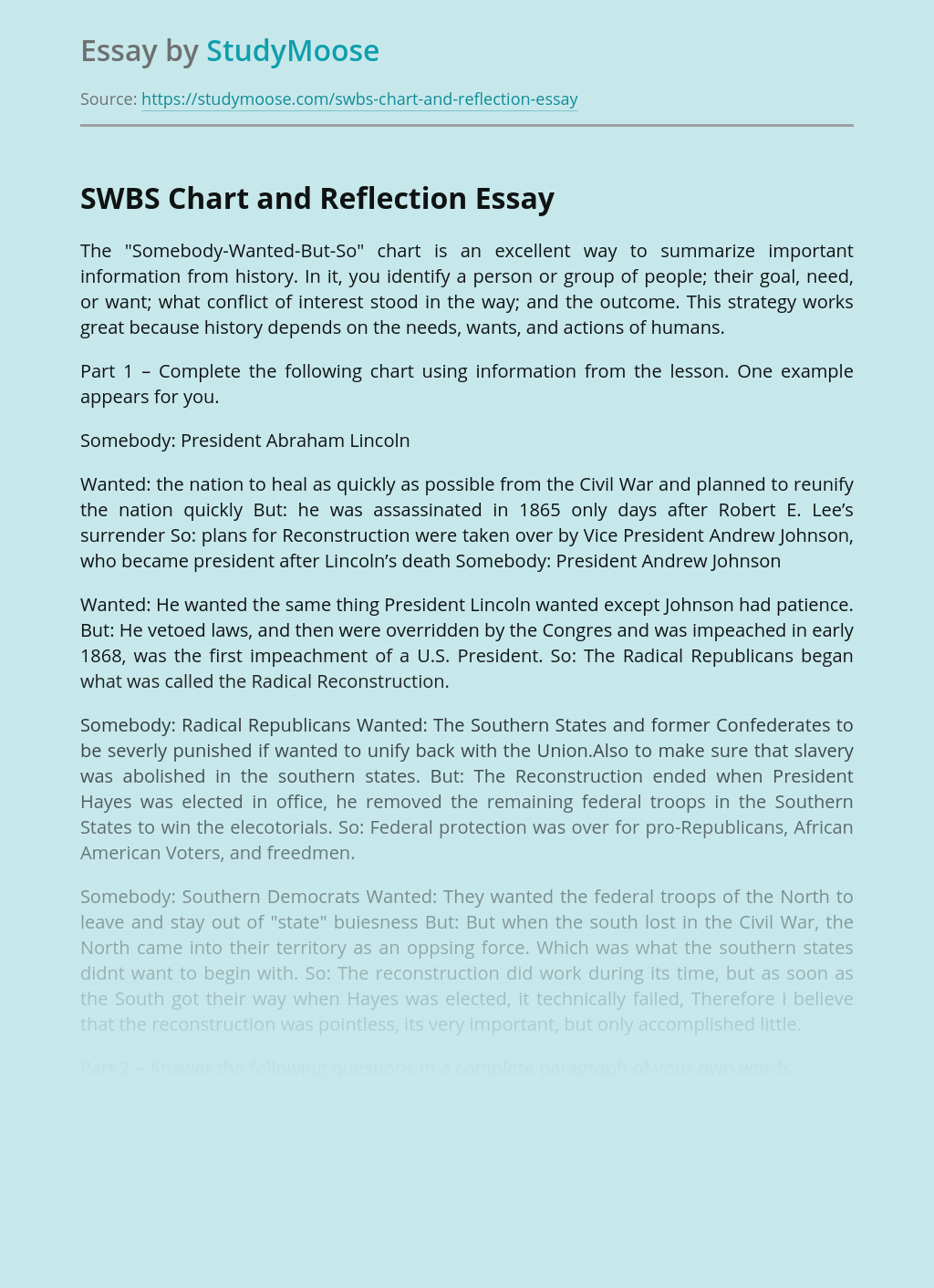 Turn in your highest-quality paper
Get a qualified writer to help you with
“ Somebody-Wanted-But-So Persona Abraham Lincoln ”
Get high-quality paper
Helping students since 2015
Stay Safe, Stay Original