Soldiers and War in Funeral Oration of Pericles

In the reading of the Funeral Oration of Pericles, I do not believe what Pericles says about Athens. I believe he made his speech to boost morale for his people and for the soldiers, and to keep the war going. In the Funeral Oration of Pericles, they were there to honor the fallen soldiers and to have a burial for them, but Pericles made it about the war. He used it to boost morale for the soldiers, to get them excited and to give them a reason to keep fighting, he also used it to give a reason behind the war to the citizens.

Turn in your highest-quality paper
Get a qualified writer to help you with
“ Soldiers and War in Funeral Oration of Pericles ”
Get high-quality paper
NEW! AI matching with writer

It was a political move on its own.

These tactics are still used in the world today, such as the war in Iraq and Afghanistan and as far back as the Gettysburg Address. Pericles believed that personal glory was one of the rare things you could have, and fighting in the war and giving your life for your city was one of the highest glories you could bestow, so therefore he glorified the war not the people that lost their lives fighting in it.

Pericles was trying to persuade the people that the war was worth people losing their lives over and that there was a meaning and cause for it. The funeral oration can be seen in the world today with the war in Iraq, where the President gives the speeches about why we are fighting in a war, the reasons and the cause, which is really not known today, such as weapons of mass destruction, it was said that Iraq possessed these and come to find out they had none, so many people lost their lives for what reason?

There was hype, and glorification given to the men and women that fought, to boost their morale and for them to know they were doing something that helped the country.

The President tried to persuade the citizens with his speeches that it was just and there was a reason for the war. In conclusion, the question asked was do I believe everything Pericles says about Athens in the Funeral Oration. The answer to that would be no. I do not believe that Pericles was there to honor the fallen soldiers. I believe he was there to persuade the citizens and the soldiers that what they were doing was right and was just and if they continued then they would be glorified.

Soldiers and War in Funeral Oration of Pericles. (2016, Mar 22). Retrieved from https://studymoose.com/soldiers-and-war-in-funeral-oration-of-pericles-essay 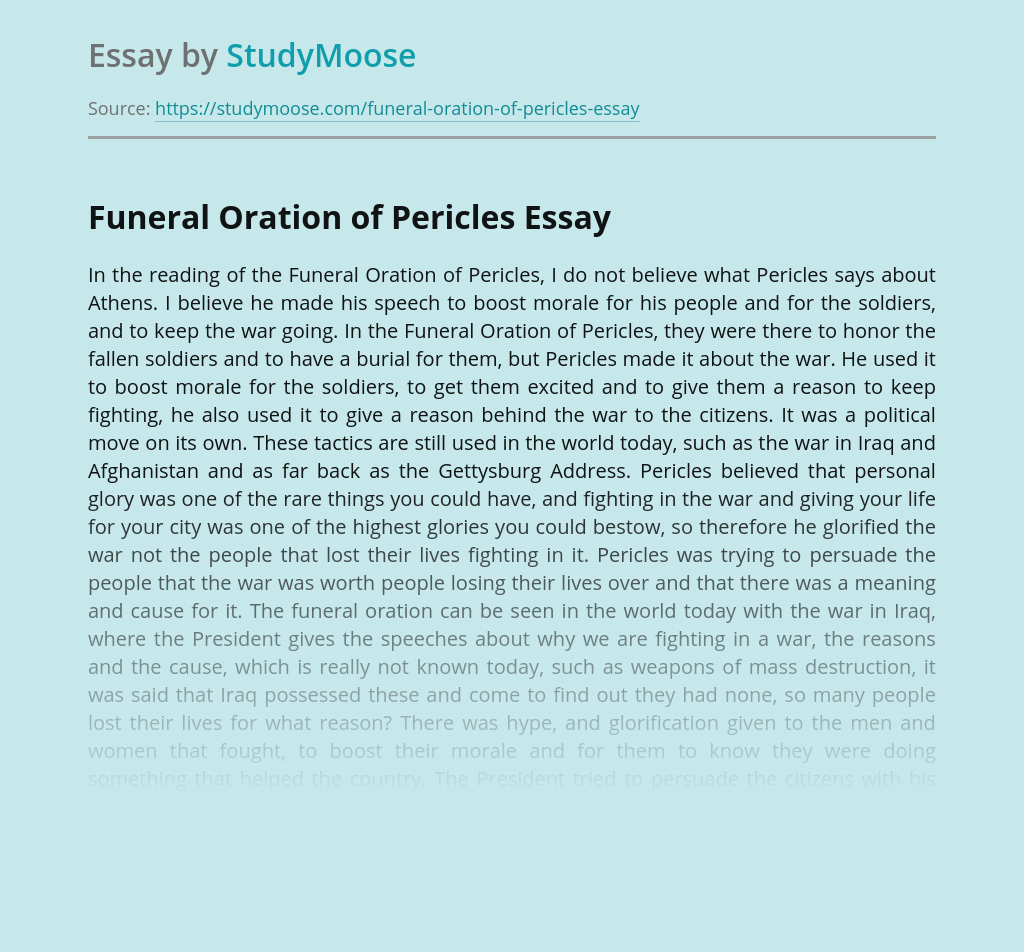 Turn in your highest-quality paper
Get a qualified writer to help you with
“ Soldiers and War in Funeral Oration of Pericles ”
Get high-quality paper
Helping students since 2015
Stay Safe, Stay Original