The Trail of Socrates occurs in 399 BCE. This was shortly after the Peloponnesian War where Athens fell to defeat against Sparta. Athens’s government at this time was a democracy. Because of the young Athenians having different people impact their decisions Athens society went through a change. One main person who is a suspect for this change is Socrates. This is why he got the charge for corrupting the youth of Athens along with not worshipping the Gods of the Polis and undermining democracy.

Don't use plagiarized sources. Get your custom essay on
“ Socrates’ Impact on Society ”
Get custom paper
NEW! smart matching with writer

Socrates shouldn’t have the following charges, corrupting the youth, not worshipping the God’s, and undermining democracy put on him in the Trail because they don’t apply to him.

The charge placed on Socrates for the corruption of the morals of the youth of Athens doesn’t apply to Socrates because he could never corrupt something that was natural moral. “The current charges…attempt to establish guilt by association” (Plato 1,2). This evidence shows that Socrates never corrupted the youth because part of the reason why the charge was put on him in the first place was because of association with the young elites.

With the grouping of Socrates’ views, we know that “[Socrates] views could never be confused with corruption” (Plato 2). Since Socrates’s views never associated with corruption, it is clear that he didn’t corrupt the youth because if someone’s views that they share are not connected to corruption then when they share them they can never corrupt someone’s morals. Socrates advocates for a lot of things but most important was when “Socrates advocated that human beings were natural moral” (Seibert).

In conjunction with the paragraph above, Socrates charge for not worshipping the God’s of the polis can’t apply to him because he helps others praise the God’s through building and sculpting. Throughout his life “Socrates worked on Some of the temples” (Historical Background Essay-2). Everything here supports the claim that Socrates worships the gods of the polis because Socrates worked on the Parthenon which is the temple on the Athenian Acropolis which is dedicated to the goddess Athena. So Socrates helps to build something that is for a god in order to get closer to her and to worship her. Even though not talked about a lot “Euthyphro Dilemma” helps Socrates a lot (Seibert). This is a great example that shows that Socrates did worship the Gods because Euthyphro Dilemma is a philosophical problem. Socrates was a smart man and knew what the God’s were capable of like jealousy, cruelty, and even murder. This is why Socrates knew not to mess with the God’s and to worship them because he knew what they were capable of. This might come to a surprise but “Socrates attended all religious festivals” (Seibert). It can be interpreted that Socrates was worshipping the Gods because Socrates went to all of the festivals which shows that he did worship the Gods because the festivals were religious ones about the Gods so Socrates attending them hows his believes in the Gods of the polis. Socrates helps to build many things in his life like how “[he] helped to create the three graces” (Seibert). This moment clearly implies that Socrates worships the Gods of the polis because the three graces are three statues of religious figures. So for Socrates to work on three statues that connect to the Gods of the polis shows that he cares about the Gods and that he wants to worship them. Even though not popular Socrates couldn’t obtain the charge because he did lots to help the God’s be known.

Working in tandem with the previous two paragraphs, Socrates couldn’t have the charge for undermining democracy put on him because he never acts against democracy he just offers a different form of government. ”Socrates never advocated an overthrow of the government”(Seibert). The conclusion obviously implied from this is that Socrates didn’t undermine democracy because he never suggests an overthrow of the government he just offers an alternative option of a new, different, and better government. Even though Socrates may support many things “[he still never] supported any of these overt acts”(Plato 1). This excerpt aims to show the reader that the claim that Socrates is undermining democracy is irrelevant because even though Socrates suggests a new form of government which is okay for him to do and not against the law because it’s a democracy even though he still never publicly supports it, he just suggests it. Without the influence of Socrates “the success of such a system appealed to some young Athenians”(Plato 2). According to the evidence, we can conclude that Socrates doesn’t undermine democracy because after seeing the success Sparta has under a new government it applies to the young elites. This is important because the youth are prospective leaders and they are expected to guide the city’s future. The people of Athens or the democratic herd “would rather have the mere shadows of reality”(Seibert). This is significant because Athens’s democracy is fatally inefficient and wishy-washy and at the same time, ordinary people tend to be erratic and irresponsible, so it would be best for them to have the truth of reality because as of now reality is already confusing and messed up in Athens. Socrates shouldn’t get this charge because of his lack of influence about the government on the youth of Athens.

To sum up, the overall outcome of the Trail, Socrates is not guilty, is best proven by the jury and the evidence that the witness put in to play. Sadly many could see Socrates fall, without the best evidence present. Socrates will still be the only one to impact the youth of Athens in a positive way. However, we will see great improvements in Athens based on Socrates. 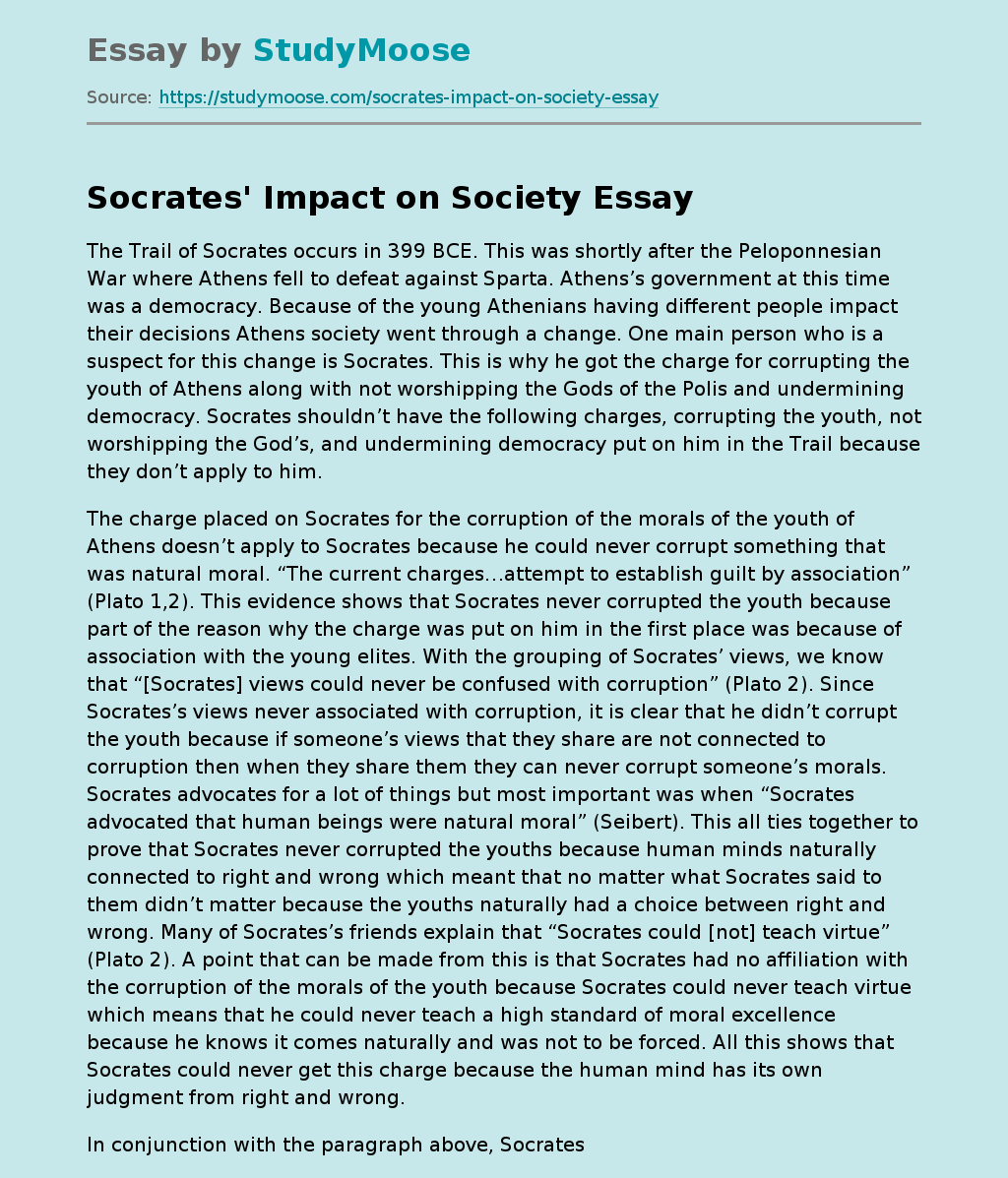