Living in America where there is an infinite amount of religions, can allow one to experience culture shock in many different ways. When a person is being exploited to culture shock they either criticize it in a negative or positive way allowing themselves to understand and appreciate the experience they’ve just encountered or think it’s abnormal and intolerable. Living in New York you can experience culture shock on any corner of a neighborhood, culture shock is so common that I’ve just learned to embrace it; but when I saw “Jesus Camp” I was so flabbergasted I couldn’t believe my what I was hearing or seeing at that.

Turn in your highest-quality paper
Get a qualified writer to help you with
“ Sociology Jesus Camp ”
Get high-quality paper
NEW! AI matching with writer

Sociology, which is the study of society, teaches you to have a non-judgmental perspective on humans in society; therefore if a sociologist goes through the experience of culture shock (the anxiety and feelings felt when people operate within a different or unknown culture) they perceive the experience with more proficiency than an average human being will.

In my occurrence of culture shock I just plain and simply thought they were out of their right minds. It was intolerable. My professor last semester decided to show the class a documentary of a type of Christianity and the way it is practiced.

The documentary, which is called “Jesus Camp”; is about kids who join a Pentecostal Christian summer camp located just outside of Devils Lake, North Dakota. These Pentecostals are known as Evangelical’s. The preacher Becky Fischer believed that the children needed to be purified to be part of the “army of God” and that they needed to be trained since the “enemy;” the Islam’s, had their children trained.

To me that meant that Becky Fischer wanted to be just as horrible as the “enemy.” The entire thing just looked insane. It was like they were brainwashing these kids, telling them that Harry Potter is the devil, these poor kids started crying the minute they were told that. These kids were all home schooled, they believed that if you are not celebrating Christianity the way they were then you weren’t a Christian. They were extracting them from there childhood, for example ghost stories were banned. One of the pastors was preaching to the children to stop abortion. These kids are fighting for things they don’t even fully understand, they haven’t matured enough to understand the full meaning of things, when I was there age the only thing on my mind was having fun and as I grew I’ve learned what’s important to me. As soon as the video finished my professor asked the class what our opinions were and a majority if not everyone automatically
responded in unison with “they’re crazy!” Although she didn’t agree with what they were teaching to the kids, she taught us that we couldn’t instantly assume the worst. We have to study every aspect as to why this is what they believe. In conclusion cultural shock could appear anyways, but you have to be open minded, although I still very much disagree with “Jesus Camp” and still believe that they are mad I have to learn to accept there way of living. 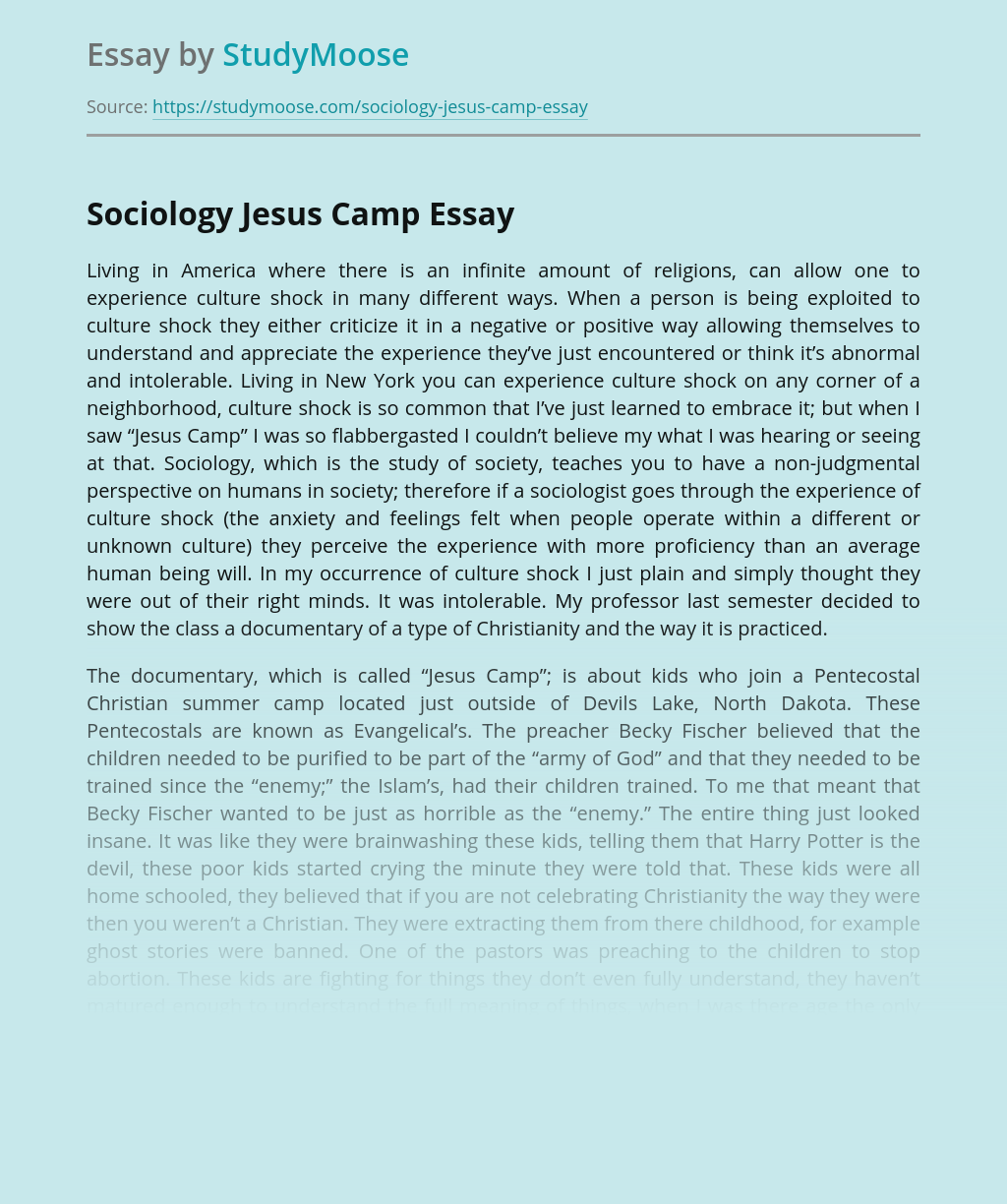 Turn in your highest-quality paper
Get a qualified writer to help you with
“ Sociology Jesus Camp ”
Get high-quality paper
Helping students since 2015
Stay Safe, Stay Original