Don't use plagiarized sources. Get your custom essay on
“ Socio Economic Profile of Quezon City ”
Get custom paper
NEW! smart matching with writer

TOPOGRAPHY
Silang, Cavite topography is central hilly, generally found on the mountain foot slope. It forms the rolling tuffaceous plateau. This topography includes steep hills, ridges and elevated inland valley. The plateau is characterized with ground elevation ranging from 30m to nearly 400m. Its ground slope ranges from 0.5 to 2%.

CLIMATE
Silang, Cavite belongs to Type 1 climate based on the Climate Map of the Philippines by the Philippine Atmospheric, Geophysical and Astronomical Services Administration (PAGASA).

Being a Type 1, it has two pronounced seasons: dry from November to April and wet during the rest of the year. In the year 2009, the average temperature of the province is at 28.4oC. January, February and December are the coolest months with an average of 26.2oC. The province has received a total of 2,001.2mm of rainfall in 2009. August and September are the rainiest months while minimal rainfall was experienced during the rest of the month.

Accessibility
Silang can be reach by bus, or by jeepney. Coming from Manila, it will take 1 hour to reach the town proper. Silang is accessible by land transportation. Major road networks to and from Laguna and Batangas traverse it making the town a potential trading center for agricultural products while enjoying an environment that is free of traffic and pollution problems. Commuters are assured of smooth travel within the borders of the municipality with of its good road networks of approximately 187.83 km. Six major road projects were completed in 1996. These are the Bulihan Resettlement Area Road, the 8-km Kaong-Maguyam Road, the Caramanzana Drive connecting the Silang Public Market with Aguinaldo Highway, the 2-km Sabutan-Iba Road, the DPWH funded Sta. Rosa-Silang-Tagaytay Road, and the Malabag Road

LAND RESOURCES AND DISTRIBUTION
Silang, Cavite’s land resources are categorized into two: forest lands and alienable and disposable lands. Forest lands are being maintained as they play a great role for the ecological balance of the municipalities aside from the fact that they are home to numerous flora and fauna that needs to be protected and preserved. Correspondingly, the alienable and disposable lands are the built-up areas as well as production areas. These lands are intended for urban, economic and demographic developments.

Forest Lands
Silang, Cavite lies in the western monsoon forest zone. This location is very beneficial for the formation of tropical rain forests which are characteristically made through natural vegetation. The richness of Silang, Cavite’s forest provides the abundance of different forest products. Grass in nature, bamboo, is one of the most available forest products being found in the municipalities.

Socio-economic
Silang, like most of the towns in the province of Cavite, depends on a mainly agricultural economy. The primary crops grown in the area are coconut, coffee, corn, banana, pineapple, and tree crops like mango, lansones, caimito, santol, jackfruit, guava, and avocado. Fertile soils and abundant water sources make Silang suitable not only for common commercial crops but also for high value and exotic crops production. Most of the local farmers practice intercropping to increase land productivity and lessen soil erosion. Fruit production exceeds the demand of the municipality’s population, thus, supply excesses are marketed to Metro Manila and neighboring urban centers. A number of poultry and swine farms are also located in some rural barangays.

Manufacturing and trade, aside from agriculture are Silang’s other major sources of income. Trade and investments grew tremendously with the influx of both Manila-based and foreign investors. Total investments were estimated at P2.5 billion between 1996 and 2004, which helped bring about the employment of 3,000 people. Despite the slow down of progress in the year 2004, Land Value still soared, allwoing investors to infiltrate and start business. The investment trend resulted in the increase in the price of prime realty from P3,000 to P15,000 per square meter and from P150 to P500 per square meter for raw lots in interior barangays. Trade establishments in Silang include gasoline stations, convenience stores, lumber/hardware traders, groceries, resorts, and hotels. 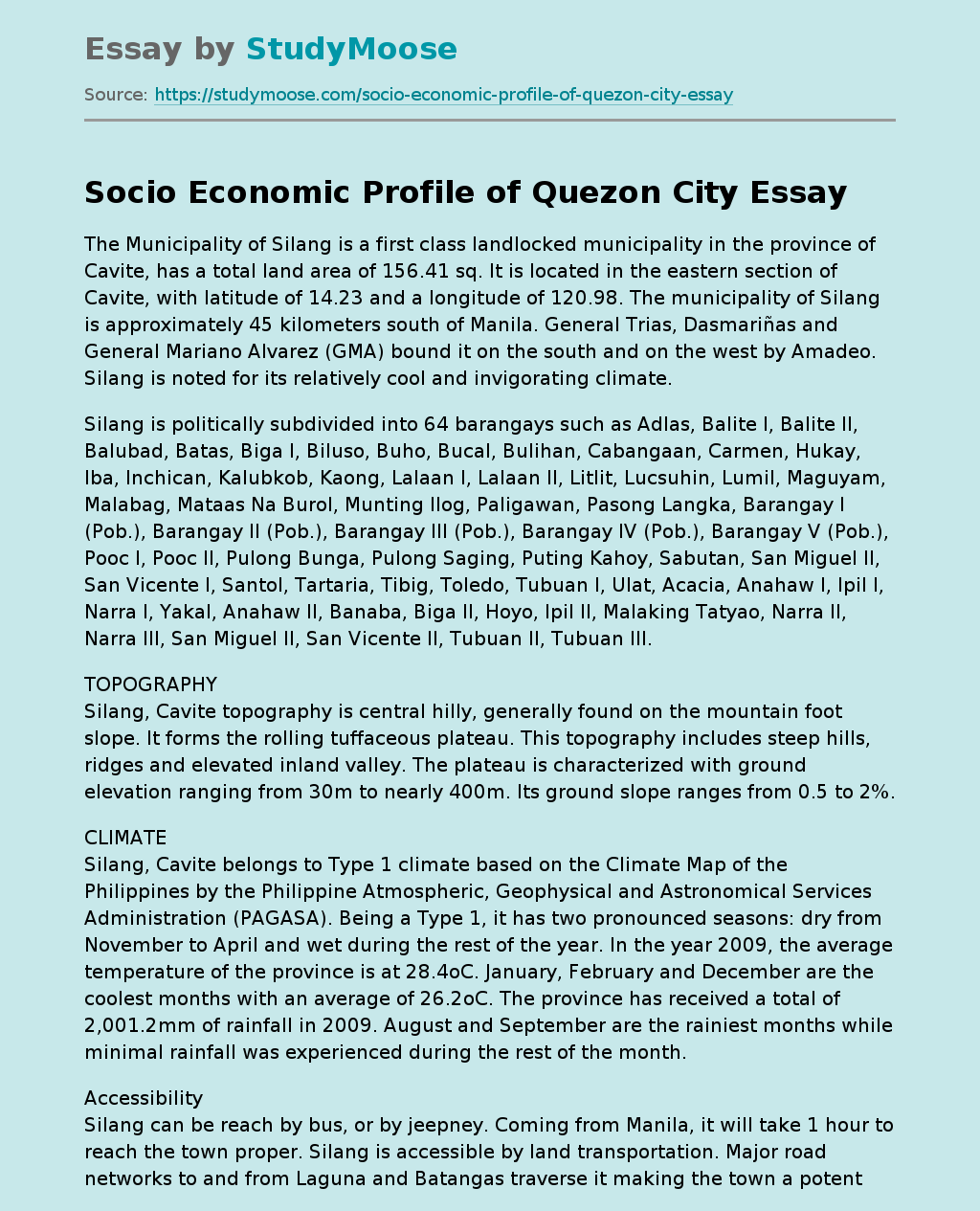