Society and Culture - Conformity and Nonconformity

The dictionary describes conformity as a harmony of the established practice. In other words, conform simply means to change one’s thoughts in order to comply with rules, or general customs. Altering our behaviors, attitudes, and beliefs to match those people around us, and adjusting one’s behavior to coincide with a group standard. People tend to conform to different reasons. They may want to belong to a particular group, or they may feel the need to conform because of a lack of self-confidence or belief in their own perspectives.

Don't use plagiarized sources. Get your custom essay on
“ Society and Culture – Conformity and Nonconformity ”
Get custom paper
NEW! smart matching with writer

People do not believe that conformity for these reasons is essential. The only time is a person should conform is when strong evidence backs up to the opposite perspective. By conforming, one may tend to lose their self in other perspectives, beliefs thoughts, or attitudes.

What makes people change from who they are to what others want or see them as? The answer lies in people’s natural sense of survival.

Individuals from they were born, are considered as a part of society. In order to survive in this society that we live in, people often feel the need to conform to be able to belong and take a part in a world that is often brutal to the outsider. An example of conformity can be seen when middle schoolers reach high school. Every school has various groups. For instance, Goths (who are a fan of rock music derived from punk), Nerds (they are considered as a foolish people who lack social skills or is boringly studious), Jocks (who are considered as an athlete, usually presented as practitioners of team sports such as football, basketball, baseball, and hockey), Skaters (a group of people skating or skateboarding), and “Others” (those who simply do not fit in anywhere.

If a teenager wants to survive in high school, the world of bullying and teasing, He must find some balance where he can strive and succeed among his peers. Nobody wants to join the “Others” group.

Unfortunately, while they are attempting to join a particular group, they tend to not see what is really important. It is a possibility that while on this struggle, to achieve what they seek, they might happen to lose themselves in others. Meaning, they might lose sight of their values, opinions, morals, and own personal beliefs so as to conform to what others think. Suppose, you go out with your friends to see a film. After the film ended, you did not think the film was very good, but all your friends thought that no doubt it was amazing. After hearing their opinions about the film, you might be tempted to conform by pretending to agree with their decision on the film rather than being the odd one out. People conform to the expectations of the group in order to avoid looking foolish. Another example of adjusting the group’s standard is, imagine a 20-year-old college student who does not drink or do drugs may fall prey to the lure of illegal substances in order to fit in, just because all her friends are doing it. So, the 20-year-old student drinks at a party just because all her friends are doing it and the student does not want to be excluded or bullied by her friends. Here again, we can define conformity as yielding to group pressures, something which nearly all of us do most of the time. Let us talk about non-conformity a little. Non-conformity is defined as the refusal to comply with society’s standard for normal attitudes, behaviors, and beliefs. In other words, failure to conform to accepted standards, rules, or laws.

People in authority tend to dislike non-conformity because it makes people harder to control. Non- conformity is a force from one’s personal self to step outside of the norm and bring a sense of individuality to a world in which there is very little originality anymore. As a society, we are controlled by the media. We walk past billboards, view commercials, peek around all the social media websites, and while our minds are being bred to be biased towards a certain fashion, a certain point of view. To step outside of this commonality in today’s society, does not seem too difficult. Everybody thinks they are “unique”, “original”, and “creative”. What we do not notice is how this seems to be what everybody believes, yet the fashion, attitude, whatever is as a phase and a trend. Being able to cope and not to be judged based upon an individual’s nonconformity today is not as hard as it was in the past. However, it is still picked upon. Ultimately, nonconformity is relative to the standards of a group and if your group is small enough, then you may be conforming to the rules of the small group but not conforming to the rules of a bigger group or society in general. There are nonconformist looks, behaviors, and lifestyles. For instance, coloring your hair purple or pink is a sign of nonconformity, or piercing your lips or nose with a ring is also a sign of nonconformity. Although, it is perfectly acceptable among the same social group of humans.

Conformity and nonconformity have both negative and positive impacts on society. Conformity assures less crime. If everybody conforms to the norms of society, there would be no need to break the laws. On the other side, people are ridiculed if they express their own, unique ideas. As a result, it forces a person to be someone who they are not. Nonconformity is more likely to encourage rule-breakers, who disrupt harmony in a society. People in government tend to dislike nonconformity because it makes people way harder to control. Knowing all of this why would an individual choose to conform? Why would they choose to disregard their beliefs in order to fit the mold of others?

Society and Culture - Conformity and Nonconformity. (2020, Nov 21). Retrieved from https://studymoose.com/society-and-culture-conformity-and-nonconformity-essay 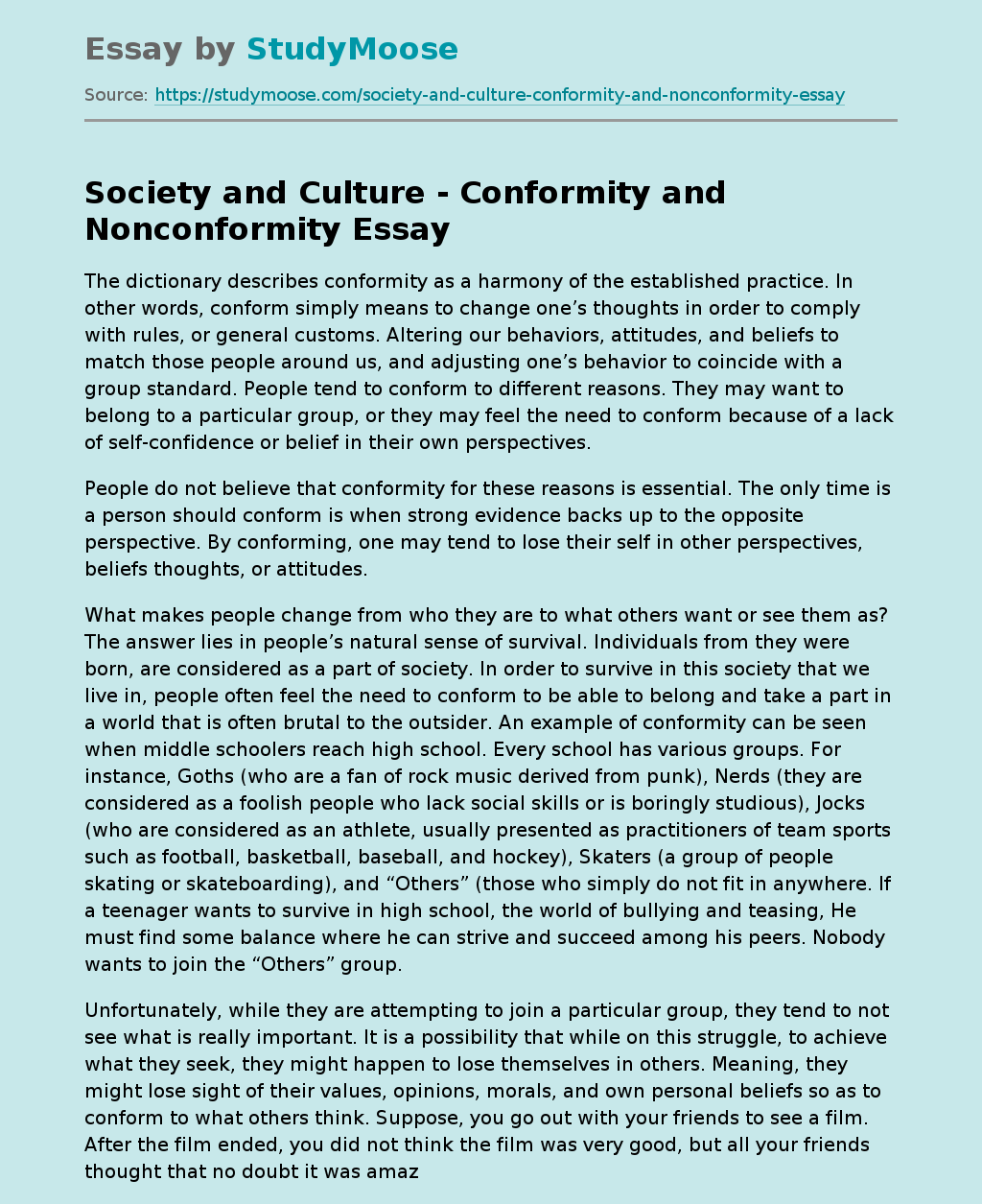