Society and Art of Tattooing

Deviant behavior has varying interpretation that depend on person, time, country or culture. The definition of deviant behavior to me can be described as an action that is different from or violates the social norm. All throughout human history, certain behaviors have gone through stages where there were considered deviant and then became acceptable. From one hundred, to fifty, to even just 2 years ago, massive cultural changes have taken place around the world. What is considered normal becomes an abomination and what is considered an abomination becomes normal.

Don't use plagiarized sources. Get your custom essay on
“ Society and Art of Tattooing ”
Get custom paper
NEW! smart matching with writer

In today’s world, people look past the fact that a person has a tattoo and sometimes even ask what the meaning of the tattoo is. It did not use to be like that. It used to be that if a person had a tattoo, parents did not want their kids associated with that person because they were considered “hooligans”, or “rebels”. People of older generation still frown on tattooing one’s skin, but later generations are being acceptable to the art of expressing one’s self.

The stereotype to the art of tattooing were usually from people with heavy religious ties, specifically Christians. There are verses in the bible where it compares the human body to the “temple of God” and asks that the body should treated as “sacred ground.” People who are religious often message this as anything artificial that brings permanent scarring or disfigurement to the body as “unbiblical.” This sometimes stretches from tattoos, to piercings, body enhancement and basically and sort of mark or disfigurement on the human body. I have known people who face constant judgement from their religious families because of tattoos. Sometimes their tattoos even convey their religious beliefs, but their families see this as a sign of rebellion and as a sign to stand against all their religious beliefs, they’re left fight and constantly justifying their true religion and intent. Some Christians and even Muslims see tattoos as a sin that God does not forgive, and an abomination that the person will live to regret.

As our world has become more diverse, tattoos have become more normal and even more customary among some people. Today, tattoos are seen as a sign of self-expression. It could be a religious tattoo, a tattoo that looks deeper into one’s sexuality, or a tattoo that just looks nice with no meaning behind it, people express themselves in all ways through the art of tattoos. Tattoos became normalized as some parents started encouraging and became accepting of their children breaking the social norm. Jobs now adays don’t mind hiring people with tattoos because people started to not pass judgement on a person’s appearance and looked past the fact that someone has a tattoo. That was not the case 50 years ago when a tattooed person was looking for a job. Even school systems now, are allowing their students to have tattoos as long as their parents are okay with it.

A social theory that is associated to people having tattoos is the “labeling theory.” This. theory relates more to the past, when having tattoos was considered a deviant behavior. Before tattoos became normal, the people who had them 50 years ago were soldiers, prisoners and bikers who other citizens labeled as dangerous and deviant. Having a tattoo was immoral and were often associated with people who have a low level in moral judgement and values. Even though many soldiers had tattoos at the time, they were seen the same as ex-prisoners who have tattoos, this label made people very alert of anyone who had tattoos. The labeling theory grouped soldiers with prisoners because people with tattoos were considered to have little to no moral values. After some time, people with tattoos bought into the label of them being deviant and dangerous because that is what people saw them as. So, having a tattoo became the cool thing for “bad guys.” Because of this label people that were in very different classes like a soldier and a thief, found it easier to relate to another which lead to some being poorly affected by negative influence. The art of tattoo took years to be accepted into the social norm and even today, some people still see it as deviant.

In conclusion, things that used to be considered acceptable or not acceptable in certain cultures has changed immensely throughout times, and it will continue to change as people grow in the act of social acceptance and trend. Labels considered to be those of deviance should be chosen by each culture and their beliefs, rather than a generalization given to a behavior. The art of tattooing, which was at a point in time named “the mark of the devil”, is now an accepted behavior that is very common and accepted. What is considered to be deviance, should be determined not by the look of a person but by the characteristics of such person.

Society and Art of Tattooing. (2021, Oct 07). Retrieved from https://studymoose.com/society-and-art-of-tattooing-essay 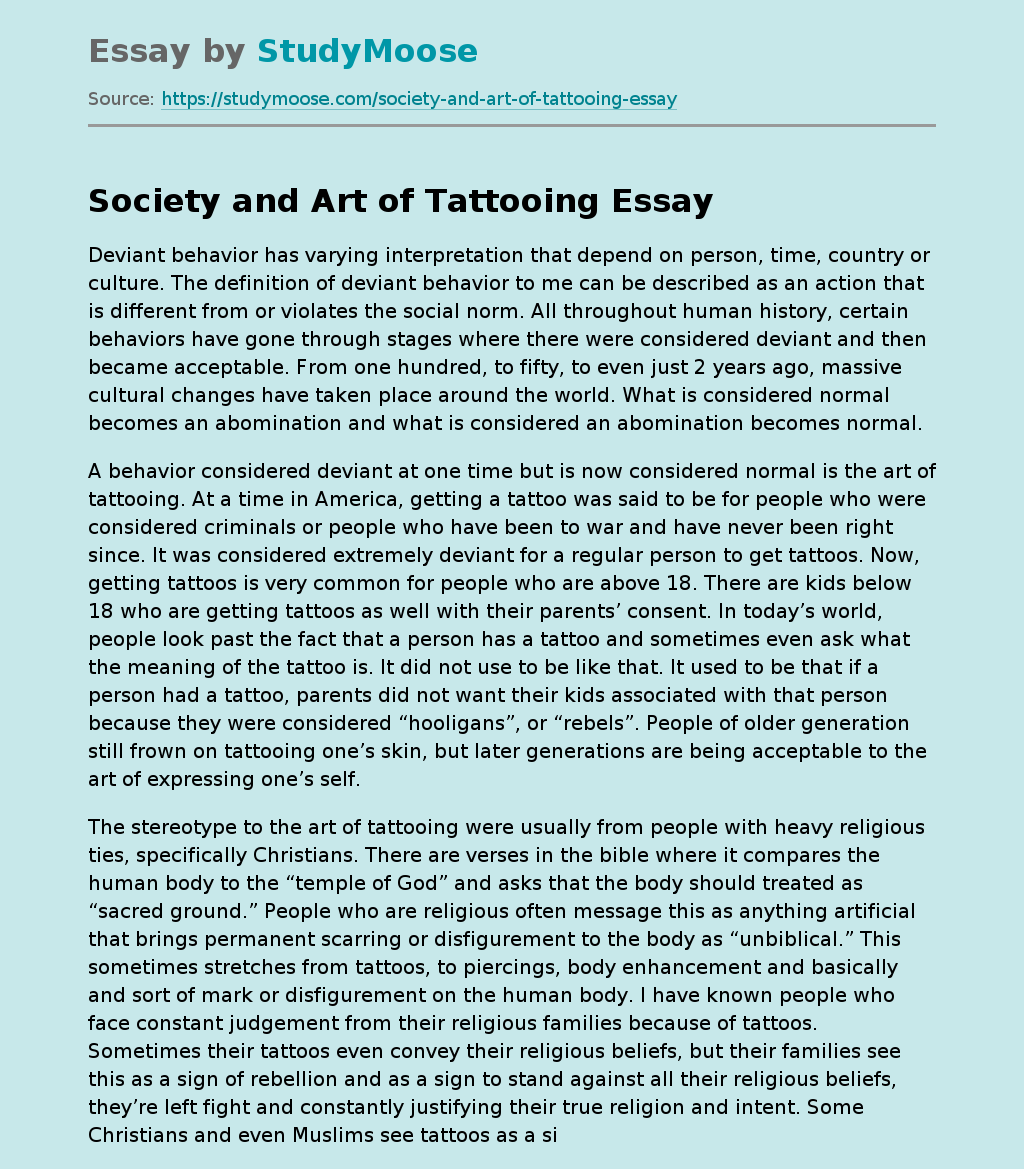