Social Problems in To Kill a Mockingbird

Atticus is one of the most educated and trusted citizens of Maycomb. Atticus is respected by everyone in his neighborhood. Atticus is fair to all and believes in what he thinks is right. He understands that people have both good and bad qualities, and he is determined to admire the good while understanding and forgiving the bad which is what he is trying to root into Scout and Jem’s minds. The judge’s gravel symbolizes how Atticus stands committed to justice and thoughtfully willing to view matters from the perspectives of others.

Don't use plagiarized sources. Get your custom essay on
“ Social Problems in To Kill a Mockingbird ”
Get custom paper
NEW! smart matching with writer

He treats both African – Americans and Americans equally. Scout is a girl, but she hangs out with boys more than girls because there are not many kids to play with in her neighborhood except for Dill and her older brother, Jem. Therefore, she is a tomboy. Scout wears overalls because she can’t “do nothing” in a dress. She likes to run and play and fights which most girls won’t do at the time period this story is taking place in.

Scout’s style of dressing and the activities she enjoys doing with Jem and Dill are a huge part of her identity. She has a distinct way of viewing the world, and that is reflected in her way of dressing. Scout is not a troubling kid but one with many opinions. The overalls symbolize the world’s view of gender roles in the South at this time and how it affects Scout’s view of the world and the society she lives in.

Scout is expected to wear dresses and stay at home doing girly stuff such as making her hair or playing with her dolls. If she does not, she is not a lady and that is unacceptable which is emphasized by her Aunt Alexandra. Scout does not like being pushed into doing what other people expect her to do. She is the embodiment of an innocent child, or a mockingbird. Jem finds himself in an even more turbulent situation. His shattering experience at Tom Robinson’s trial occurs just as he is entering puberty, a time when life is complicated and traumatic enough. He lost his mother at an early age when Scout was only a few months old and doesn’t remember her where Jem has memories which often appear and make him sad.

Jem`s experience during the Tom Robinson showed him that justice does not always prevail and leaves him scarred and scared of the society he lives in. Jem is still able to uphold the commitment to justice that Atticus rooted in him and Scout. Jem is like a pair of running shoes because the more life throws out him the more knowledge he receives and the stronger he becomes. Just like how running shoes are worn and they get comfortable but after a while, they get worn out, Jem has endured everything wrong with the society such as the racism that exists to the Tom Robison trial.

However, he still is a kid who is going through some hard times. Dill is Jem and Scout’s summer neighbor and friend. Dill a very curious kid who is the only one in Maycomb who sees how the racism in this society affects the people. One time when Dill shows his innocence, is during the trial of Tom Robinson. He breaks down while Tom Robinson is being cross-examined by the prosecutor. This is an important example of his guiltlessness because he believes that it is wrong for the prosecutor to talk down to Tom because of his race. He can be symbolized by a magnifying glass because he is always wondering about other people and he is always giving his own opinions about everything. Such as the Tom Robinson trial or Boo Radley.

Social Problems in To Kill a Mockingbird. (2021, Dec 02). Retrieved from https://studymoose.com/social-problems-in-to-kill-a-mockingbird-essay 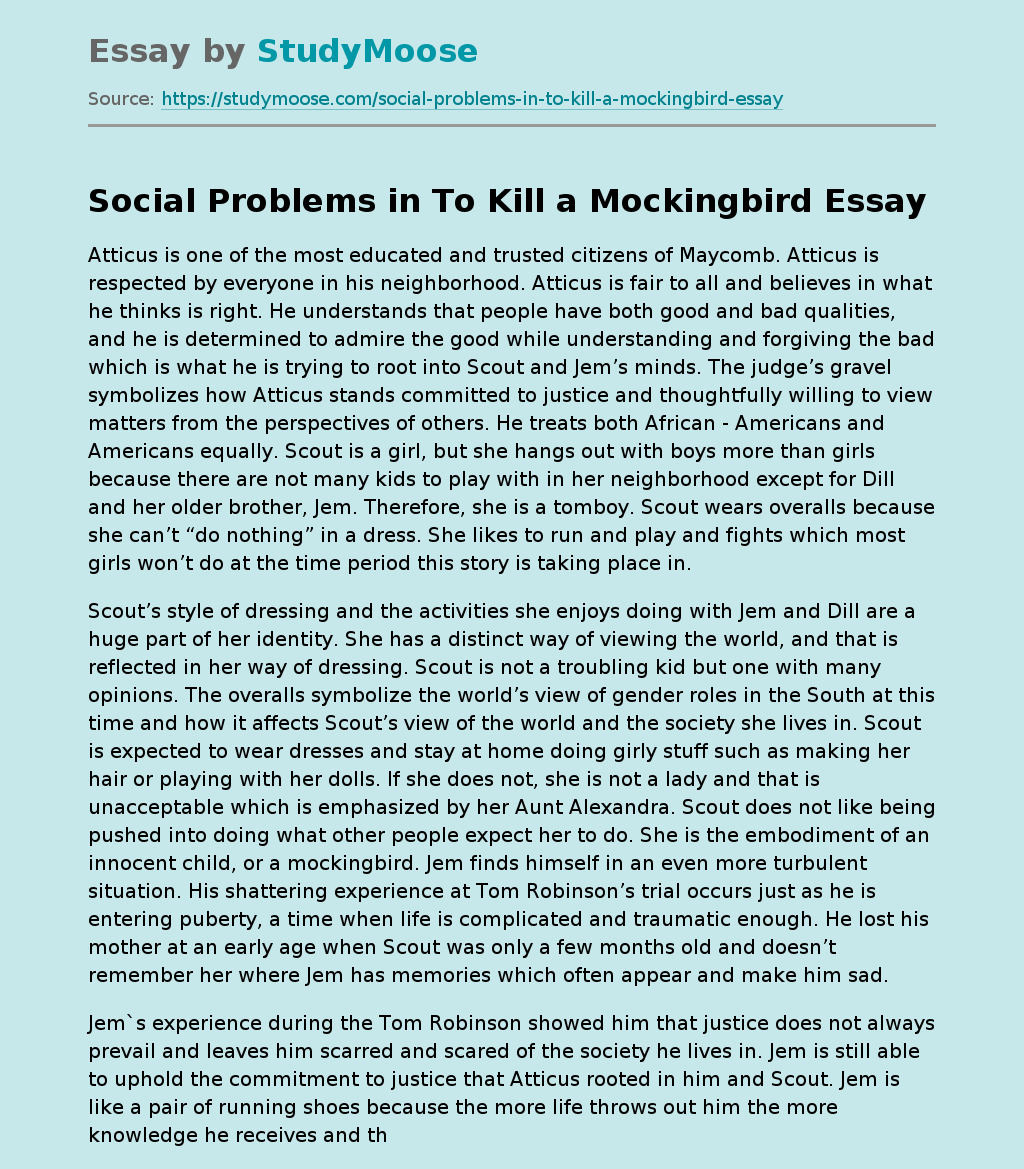