Social Network and Its Effect on Poor Students Academic Performance

Facebook, Twitter, and Instagram are the example famous social network that becomes the best choice among the students, especially university students. Social network can defines as site of grouping of individuals into specific groups, like small rural communities or a neighbourhood subdivision. Nowadays, the social network is a necessary communication tool that has emerged in the field of information and communication technology and has positively impacted almost all aspects of human life (Audrey, Gerald, Tai, 2012 as cited in CBSNews, 2008). Apart from that, addiction of using social network can becomes negative effects overweight the positive ones.

Turn in your highest-quality paper
Get a qualified writer to help you with
“ Social Network and Its Effect on Poor Students Academic Performance ”
Get high-quality paper
NEW! AI matching with writers

These sites have caused some potential harm to society. The students become victims of social networks more often than anyone else (Michael, 2012). Firstly, one of the effects of addiction social network is it may lead students to wasting their free time. The reason of this situation happen is students may surf more social network for playing online games compare to use their free time for study.

‘Farmville’ and ‘I am Player’ are the example online games that are in trending in Facebook. The CBS News National correspondent, Hattie Kauffman reported that people who use the Internet excessively, defined as using for more than 30 or 40 hours a week the Internet to participate in SNSs, check emails and play online computer games are considered Internet addicts (CBS News, 2008).Other cause is that they considered stalking other people’s profile account for hours on end (Walker, n.d.). Stalking on other people’s profile account can make students while away to do a revision their lesson.

Students, while searching and studying online, get attracted to using social media sites and sometimes they forget why they are using internet. This wastes their time and sometimes students are not able to deliver their work in the specified time frame (Negative Effects of Social Networking Sites for Students, 2012).In addition, chatting activity during free time also can give a negative impact to student’s performance. Some teachers believe that despite schools banning mobile phones, many pupils take smart phones secretly to school and remain connected to social networking websites in class (Bloxham, 2010).

Besides that, students can reduced learning and research capabilities
among students. One of the causes this happen is by did their assignment at last minutes. This is because they relying more on the information accessible easily on the social networking sites and the web (Negative Effects of Social Networking Sites for Students, 2012). Scope of research also is not extensive because it just only based on social network especially in blog. Furthermore, all the information obtained probably untrue or fake. Sometimes, information was given by anonymous usually not true because the source that they got is fake. In addition, students who spend much of their time online find it harder to concentrate in class, are permanently distracted and have shorter attention spans, researchers found (Bloxham, 2010).

Addiction of using social network also reduces command over language use age and creative writing skills (Negative Effects of Social Networking Sites for Students, 2012). Student language will be mishmash language when they started to use social network in their daily days. This is because students always use slang words or shortened forms of words on social networking sites. They start relying on the computer grammar and spelling check features. This can reduces their command over the language and their creative writing skills. Other than that, students also did not expose to current issues (Bloxham, 2010). This is because they just only play with social network. When they started to play social network’ application, they might not know what happened to outside world because they are very focused on social network. This will affect their knowledge to do writing because they do not have an idea to write. Students also influenced by the trend carried in this modern generation (The Effects of Social Networking upon Society, n.d.). When students go to outside world, they will face much kind of people. Sometime, this people were followed the new trend language in this modern time. So, when students spoke with them, students will influenced with their trend. This will be problem to student how to know that language is true or not. If they can not to recognize, they will bring this language to their writing and can cause the writing to be false.

In conclusion, there are many causes that can give an impact mostly is negative effects to student academic performance. Social networking is
becoming increasingly popular and is a trend among young adults nowadays. Hence, there should be a study to find out whether is there any form of addiction that attracts the frequent visits and usage of social networking sites. To sum up, students should have to realise that social network is not gave 100% a positive effect to them for success in academic performance. So, as a student we need to step forward thinking about our future and make a move to get success in academic. (744 words) 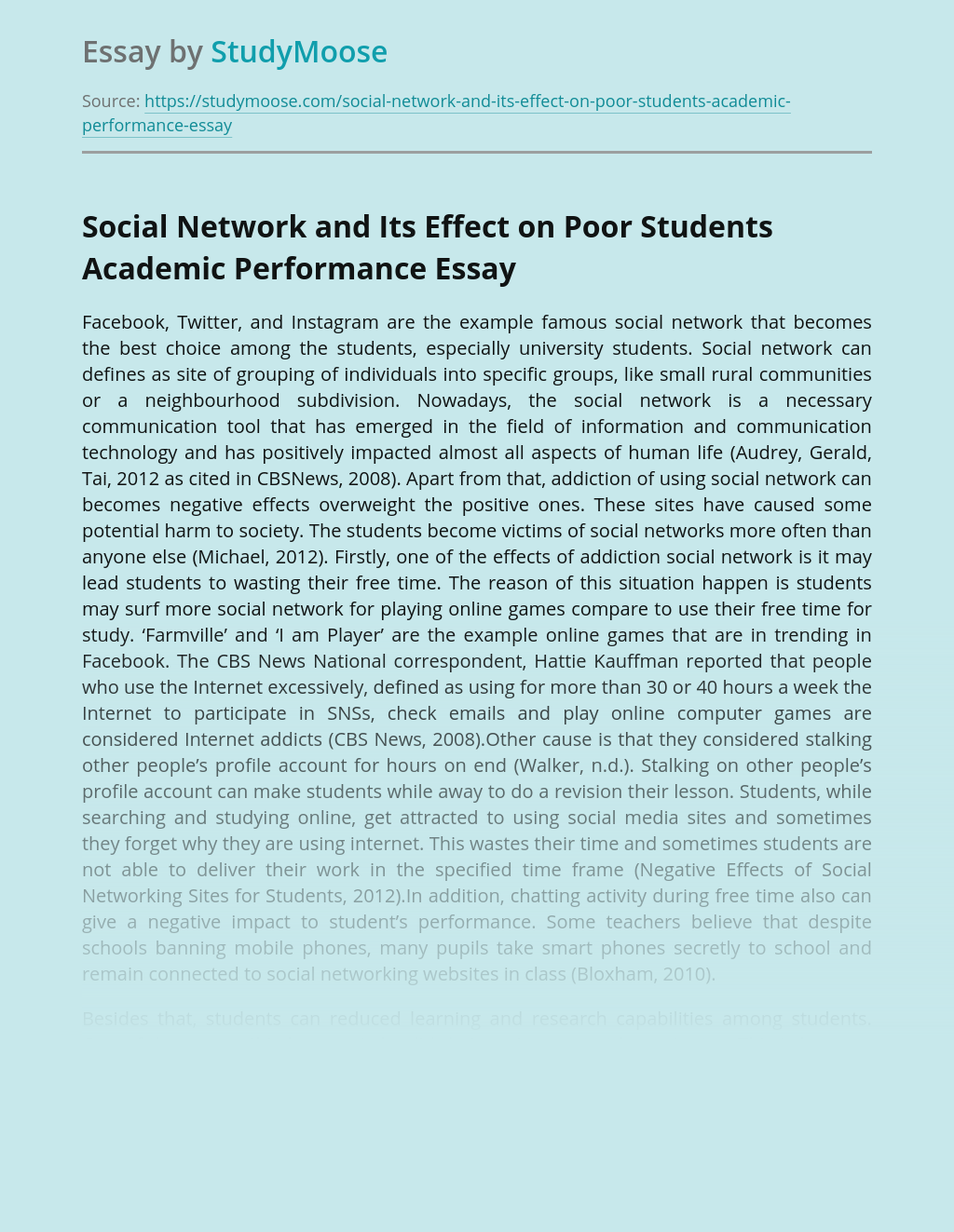 Turn in your highest-quality paper
Get a qualified writer to help you with
“ Social Network and Its Effect on Poor Students Academic Performance ”
Get high-quality paper
Helping students since 2015
Stay Safe, Stay Original