Don't use plagiarized sources.
Get Your Custom Essay on Social Media Speech Just from $13,9/Page

Social networking websites can be utilised as a beneficial tool to keep in touch with friends and to communicate and interact with people across the globe. Thus, it has become very popular particularly amongst teenagers to interact and connect with others online. However, it must be mandatory in schools to educate students on the correct and safe access of social media.

It must be compulsory for children to learn about the consequences of social media, as it is a potentially damaging and destructive environment, which can lead to a variety of issues including mental illness, addiction and cyberbullying. Some people state that if children are old enough to have a social media account or phone, they should be able to responsibly use the internet. Wrong. According to the National Alliance on Mental Illness, it states that people between the ages of 15-24 suicide is the third leading cause of death due to cyberbullying.

Over a whopping 69% of people who commit suicide have been diagnosed with mental illness due to cyberbullying. In addition, a staggering 95% of all teenagers aged 12-17 are considerable users of the internet and 80% of those teens are social media users according to Pew Research Internet Project. From these statistics alone, it is blindingly obvious that a huge portion of our youth can easily become victims to cyberbullying and worse, can become victims of suicide and depression. Do we not owe it to the 69% of youth that sadly end their lives because of online taunts and harassments? Do we not, as a nation, have a duty to protect our children? We must take initiative now! It is imperative that we stand together against these heinous and malicious threats against our upcoming generation. This is why it is so crucial and vital for our education systems to incorporate the safe use and consequences of social media as part of the curriculum.

There are those that state that social networking web sites can be a useful tool to keep in touch with family or loved ones and it gives people the flexibility to globally interact with others, from celebrities to strangers. However, a vast number of young people tend to overshare private information and personal pictures of themselves to people they have barely even met! Some even go as far as sending such things to people who they have never even seen before! Imagine that! Imagine your photos, your address, your phone number and your credit card details all at the mercy of an unknown individual who could potentially circulate all of this information to other strangers. It would be a vicious cycle where your most private information is continuously leaked. And the worst part is there is nothing you can do to stop it. You will never be able to fully eradicate it. Therefore, I strongly believe that by educating our young people and bringing awareness of these potential dangers to them, we can help reduce cases of illegal information sharing and privacy violations.

Now, we all are aware of the addictive nature that social media has. Nevertheless, every generation had their own obsession, so how are we any different? According to neuroscientist, Mark Goulston, there are certain “feel-good” brain hormones such as oxytocin and dopamine that are located in the pleasure and reward centres of your brain and are released when individuals actively use social media sites. Although social media is a psychological addiction unlike substance addiction, brain scans reveal that there are frighteningly similar impairments of regions of the brain, especially in the degradation of white matter that those with drug dependence usually characterise.

These regions control emotional processing, decision making and attention. Social media is extremely addictive as it provides immediate and satisfying rewards (through the release of hormones) with very little effort. Your brain automatically begins to crave it more and more as you desire these chemical stimulations. Sounds like a drug right? Some studies even show that around 5%-10% of users find it difficult to control the amount of time they spent online and literally cannot log off. So although social media stimulates our brain and sends chemicals that make us feel great – it’s harmful to our real life relationships and distances us from the connections we have around us, often times becoming a distraction to young people which can deter them from their schoolwork and affect their ability to interact with people face to face.

Instead of continuing our ways, we can change. As a nation and together as a world, we can eradicate cyberbullying, suicide, mental illness and other psychological problems just by educating youth and children in school about the correct use of social media. Think of all the lives that could be saved! It is too often that youth have been cyberbullied on networking web sites. It is too often that children kill themselves over harassment online. This needs to stop. Now! If young children were to have the knowledge and understanding of the consequences and effects that could result from social media, they would be able to see the potential risks and be safer whilst social networks.

As a nation, we must have the initiative to prevent this from happening to our children. If they were to know how to prevent and avoid circumstances such as this, there would be less harm on the internet and it could be cautiously utilized. We can change our generation; we can be the generation to make an impact on this world. We are the ones that will be shaping our future so it is our responsibility now to make a change. We say we live in a “messed up society” but has it ever come across our minds that WE are the society. We are the people that have to take, charge, and influence other minds across the world. We are the ones that will have to take leadership and develop our future world by making small decisions such as teaching the correct and safe use of social media in schools, which would make a big impact on the rest of our lives. 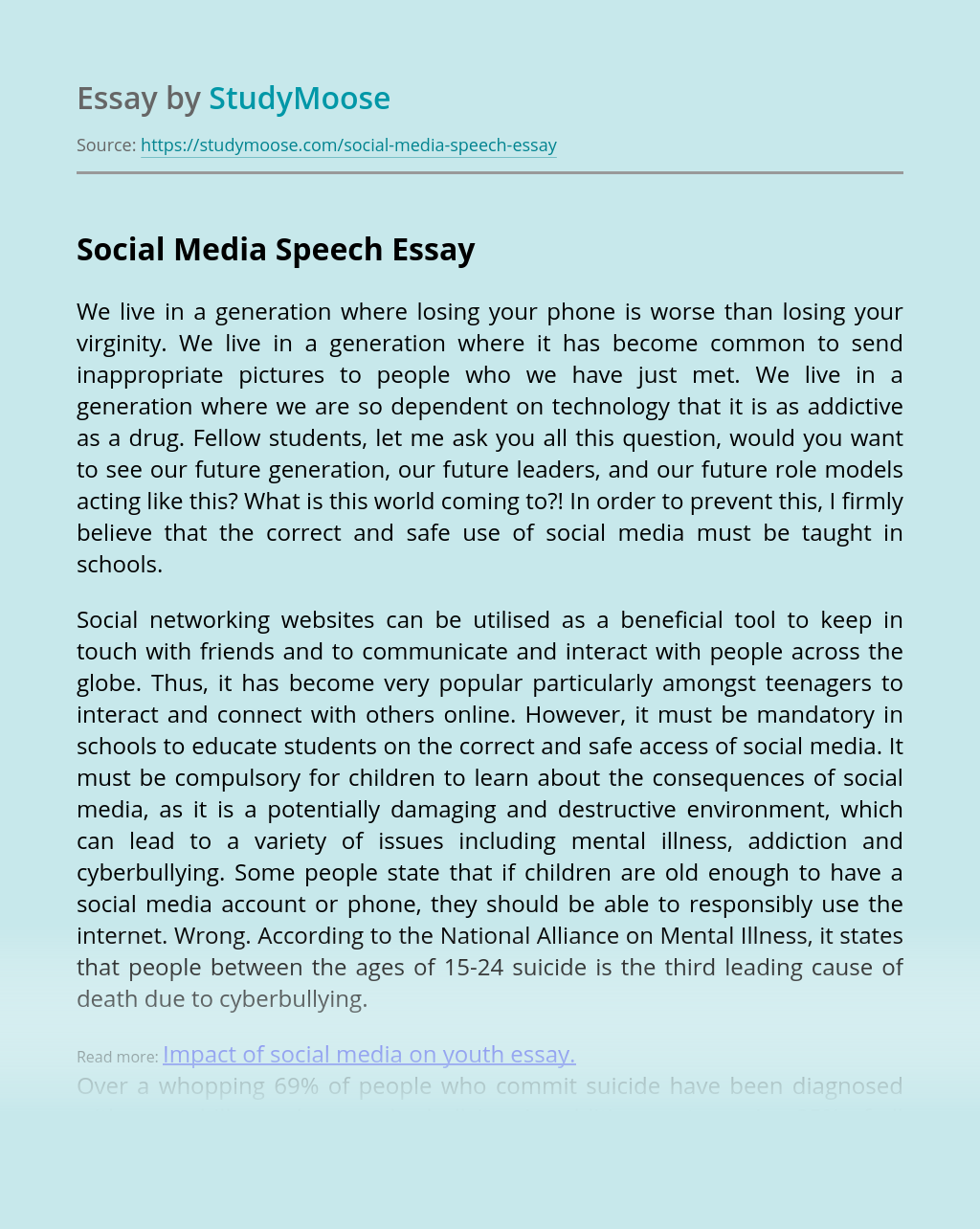 Thirst is the craving for liquids, resulting in the basic instinct of humans or animals to drink. It is an essential mechanism involved in fluid balance. It arises from a lack of fluids and/or an increase in the concentration of certain osmolites such as salt. If the water volume of the body falls below a certain threshold, or the osmolite concentration becomes... VIEW ESSAY

introduction ? Brain driven car which would be of great help to the physically disabled people. ? These cars will rely only on what the individual is thinking. ? Any physical movement on the part of the individual is not required . ? a great advance of technology which will make the disabled, abled. ARTIFICIAL... VIEW ESSAY

As part of its enduring commitment to public education and outreach, the Society for Neuroscience (SfN) is pleased to present the seventh edition of Brain Facts: A Primer on the Brain and Nervous System. This edition has been substantially revised. Research progress has been updated throughout the publication, and a new section on animal research... VIEW ESSAY

View sample
The Functions of the Eye, Ear and Skin; Their Role in Behavior

Vision starts with light, the physical energy that stimulates the eye. Light waves coming from some object outside the body are sensed by the eye; the only organ that is capable of responding to the visible spectrum. Eyes convert light to a form that can be used by the neurons that serve as messengers to... VIEW ESSAY

Phineas Gage is one of the earliest documented cases of severe brain injury. He is the index case of an individual who suffered major personality changes after brain trauma, which makes him a legend in the annals of neurology. Gage worked as a foreman on a crew that did railroad construction and was excavating rocks... VIEW ESSAY