Nike has been one of the top companies in taking their marketing to the next level. Nike was able to reduce the company’s advertising by 40% and now they are linking social strategy with the product and experience. This really allowed for the company to foster closer relationships with customers and create a community. Nike first started with Nike.com website and was able to team up with the company and website named Gawker, in which they created a blog called Art of Speed.

Turn in your highest-quality paper
Get a qualified writer to help you with
“ Social Media in Social Strategy at Nike ”
Get high-quality paper
NEW! AI matching with writers

The blog really focused on film directors, short films, and the type of technology they would use to develop the films. However, the communication manager of Nike was concerned because traffic was not increasing but he said that although its small, it still really is an important and influential group. This really showed that Nike really wants to foster a connection with its customers.

The company is really willing to do whatever it takes to engage consumers and maintain a relationship. This really helps Nike create brand loyalty. Furthermore, Nike also on the global football soccer market linked with MySpace in which it acquired a lot of friends which allowed Nike to become one of the biggest worldwide. Nike also partnered with Google to develop another social network website called joga.com. This website focused on football soccer and mainly for the people who loved it.

The whole reason for this website was because Nike really wanted for consumers to foster a closer relationship with the sport and the world cup so that way it associated with the Nike brand.

Joga.com also had an online TV channel in which it featured football starts and people were able to create discussion groups. Although the website didn’t workout in the end. It really showed that Nike was still able to put in effort and was really able to still get feedback from its consumers. They were still able to create a community and really learn from their customers. By Nike creating these ecosystems they were able to have more of a collaborative network. This also allowed for higher efficiency.

Nike did a partnership with Apple to create Nike+. Nike+ was made up of a sensor that was inside the runners shoes and it was able to monitor the runners speed, distance, and calories burned in which it transmitted all that information into an iPod. It also offered training tips and the ability to share the workouts with friends through the Nike website, facebook, and twitter. Nike expanded their twitter account and in order to form deeper relationships with athletes all over the world. It really became a huge social networking campaign that introduced their newest products. Nike also launched the ballers network in which it was a facebook application and website which helped players manage teams online. Also write the future leveraging facebook in which Nike launched its major commercial for the world cup and it really went viral because it allowed consumers who love the sport to really connect with players around the world. The grid in which they also used facebook.

The grid was a real gaming platform for runners. It really created an experience for runners. Nike really wanted to be able to create buzz on its products and athletes so they decided to create a video that featured the Brazilian player ronaldinho. The digital manager of Nike was already developing a relationship with you tube so they decided to upload the ad onto you tube. The video received million views within a week. They were the first company to actually leverage you tube with branded content, Nike was really smart in creating a Nike football channel on facebook which allowed consumers to know that it was Nike products. All of the social media was really integrated into their digital strategy because for example with the Nike fuel band in order for the people to measure their fuel, Nike has many applications that can help with measuring the results. People are able to share it on facebook and twitter which is also recorded on the Nike website.

This really allows for Nike to give feedback and get feedback on their products. Also Nike has really gone mainstream with twitter because they are really building relationships with their fans and use a lot of motivational and inspiring tweets. It really inspires their fans. Nike’s brand goes global but thinks local because in each country they work with that social network. The company was really able to meet consumers demand by utilizing all these social media. All of their products were really able to gain more interactions. Nike has a product and social network that a lot of people use everyday which helps increase brand awareness.

How does Nike integrate its digital strategy with its social strategy?

How was Nike able to develop such an integrated social and digital strategy?

Nike football + was a digital application and website which allowed people who previously purchased a Nike football product to log on and receive video tips and training advice from football stars. Whether it was the Nike fuel band or the Nike+ training, Nike was really able to incorporate digital and social together. Consumers were always able to share or retrieve data through social networks. Millions of users are able to check their performances online. Nike really developed its social offerings for the runner community. In which it includes a shoe, an internet platform and device such as an iphone, iPod, gps watch and fuelband. Nike was able to integrate such strategies because they were really able to gain customer data which allowed them to understand the customers wants and needs.

Nike is all about innovation and wanted to really be able to compete in highly competitive digital world. Technology and social media is always vastly increasing and Nike really took the lead in being able to incorporate these two strategies together. Also, because Nike created many partnerships with other organizations which led them to integrate both strategies. Any of the digital products that Nike came out with it, was always linked to social media. Nike was really able to broadcast their messages and were able to get feedback from consumers through social media. At the same time they were building a community in being able to build a closer relationship. It really helped create effectiveness and customer relationship management in which they gained a lot of insight.

Digital and social strategies helped to decrease costs because it is cheaper and facebook, twitter, and you tube really allowed for the fans to meet and strengthen their relationships. Consumers also had more willingness to pay because through social media they were able to connect to their Nike website and shop their products. It really helped to create social value because consumers felt like they were part of a community. Social platforms really allowed for special offers as well. Nike digital sport really allowed for Nike to develop its products in being able to enhance someone’s performance by also maintaining a community. Nike was really going where the customer is and were always trying and testing new approaches.

Social Media in Social Strategy at Nike. (2016, May 08). Retrieved from http://studymoose.com/social-media-in-social-strategy-at-nike-essay 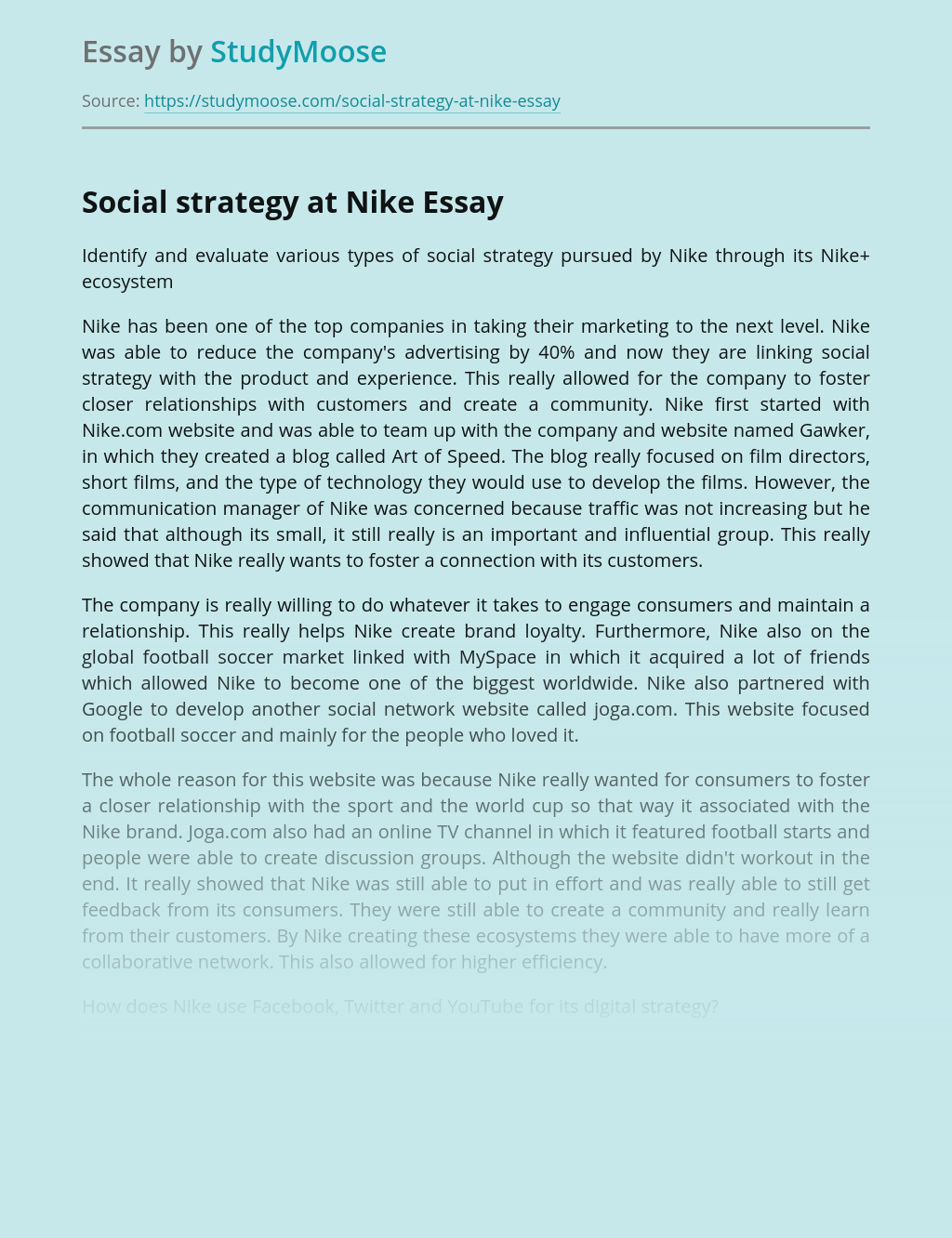 Turn in your highest-quality paper
Get a qualified writer to help you with
“ Social Media in Social Strategy at Nike ”
Get high-quality paper
Helping students since 2015
Stay Safe, Stay Original