Social injustice and poverty arises in the story Les Mis?rables

An astonishing movie with extraordinary scenes that brings you in roller coaster ride entitled, Les Mis?rables, in year 2012 it was released as a musical drama by the production of working title films and relativity media and the movie was distributed by Universal pictures. The movie is actually based on the French historical novel Les Mis?rables written by Victor Hugo and it was published in 1862. The novel was considered to be one of the greatest novels in 19th century. It took place in various places in France in the early 19th century, the time when French revolution occured.

Don't use plagiarized sources. Get your custom essay on
“ Social injustice and poverty arises in the story Les Mis?rables ”
Get custom paper
NEW! smart matching with writer

It started in 1796 and settings changed into 1815. Behind this astonishing film, the author, Victor Hugo had witness an incident way back 1829 which involved three strangers and a police officer. One of them stole a loaf of bread just like what Jean Valjean did in the movie. His character was based on the life of the ex-convict Eug?ne Fran?ois Vidocq. As for the role of Fantine and Cosette, it was inspired by what Vincent Hugo saw; a mother with her daughter playing with each other.

On the other hand, as we focus to the social status of the people in France during those times, they have faced French revolution, a period of social and political upheaval wherein the conditions of the working class totally deteriorated. Victor Hugo have written this story as to show inequality between social classes that were present in those historical century that have caused revolution. Les Mis?rables has thought to be written regarding social injustice.

Les Mis?rables was all about French revolution. It was conversed in a musical way and not in an ordinary dialogue. The movie used many songs for the characters to sing their heart out as a way of expressing themselves and a way to communicate to each other. The writer have introduced the movie through its history as to how the conflict began which involved Jean Valjean as the protagonist and Javert as the antagonist. French revolution was the basis of the story, people’s rebellion against the government. Many of the French have been slaved because of breaking the law, regardless how small or big the violation was. This musical drama film’s plot is no ordinary, scenarios were being presented in a particular year when the events had happened since the novel has a different volumes.

Les Mis?rables relates to the French history that manifests fight, hope, dream and love. All these reflect what people have experienced in the past century. Social classifications and social injustice were present which show Marxism playing its role in the society. The film sets in France and nearby places which is adopted in historical times. The plot is being viewed in choronological order, the film projects the year when did a certain event had happened. The opening of the scene was very spacious and characters were singing as a form conversation, background music was enough for viewers to understand what feelings that the movie was trying to imply. It was actually the scene wherein the protagonist and antagonist are being introduced namely Jean Valjean as a prisoner and Javert as a prison guard. They are seen as powerful characters for they convey strong personalities on their roles. The story revolves around the legacy of French revolution. People were fighting for their freedom from the brutal slavery. The story scenes were filled with bombshell and dramatic actions in galvanizing scenes that would make viewers feel what character have undergone. As we focused on Marxism, it was shown in the movie wherein people are facing great poverty, struggling to survive life, from the title itself “Les Mis?rables” which means the miserable ones. Social injustice is existing in those times, particularly in the scene at which point the victims were being slaved for breaking a law, it just shows how unfair the government’s ways of punishing them. Jean Valjean have encountered such injustice, he was imprisoned because of stealing a loaf of bread for his sister’s hungry children. He then faced 19 years imprisonment for doing such minor act. The government and upper classes showed no mercy to the commoners. This proved that humanity and freedom are being deprived from them. Social injustice was the major problem during those times when Fantine was being sexually abused by and served as a prostitute just to earn money, support her daughter, Cosette’s needs and be able to get her back from the Thenardiers. Human rights of the French were not considered and it was being abused. Moreover, despite all the inhumane actions, the movie has still the moral lessons we can learned, Jean Valjean teaches us viewers that it’s never too late to change. After being imprisoned for a long time, Bishop Myriel accepted him and turned him into a totally different person. He has learned to see the faith in the humanity even though France was facing huge chaos, the French revolution. The movie afterall was about social conflict and political conflict which have caused such revolution between the people in politics and French commoners. Its elements were well expressed. The volume of the characters’ voices are enough to understand what they felt, also the sound effects have a great impact on swaying the audiences’ sensations. The settings really emphasize historical places which you can say that the film is created in 19th century when in fact it is not. The environment is 19thcentury-like, showing ancient places and even the characters’ appearances. The dialogue was the best part, caracters’ were singing and it was very pleasing to hear. This musical drama film did great in working the movie elements.

In general, the movie, Les Mis?rables was all about French revolution, leaving us mixed emotions. Each of the characters’ roles has greatly contribute to the beauty of the film. Plot is being shown in a chronological order for it projects different years to understand when the incidents happened. Sounds were powerful enough to imply what emotions of the scenes were trying to show. The ways of the dialogue are very creative which characters’ were communicating with each other through singing. This musical drama film highlights social injustice and political conflicts that is present in those barbaric times. French people can barely survive life because of poverty and poor government system, many of them had suffered a lot. It let us realized how cruel the world was, but at the end we it teaches us lessons such as humanity. Faith in humanity has seen because of Jean Valjean, He was once a sinner but eventually became a better version of himself who then trust and have faith in God. Bishop Myriel was the one who made him see the goodness that he has in his heart. The film focuses historical events that French people have experienced, especially the French revolution. Les Mis?rables was all about fight, dream, hope and love.

Social injustice and poverty arises in the story Les Mis?rables. (2021, May 30). Retrieved from http://studymoose.com/social-injustice-and-poverty-arises-in-the-story-les-mis-rables-example-essay 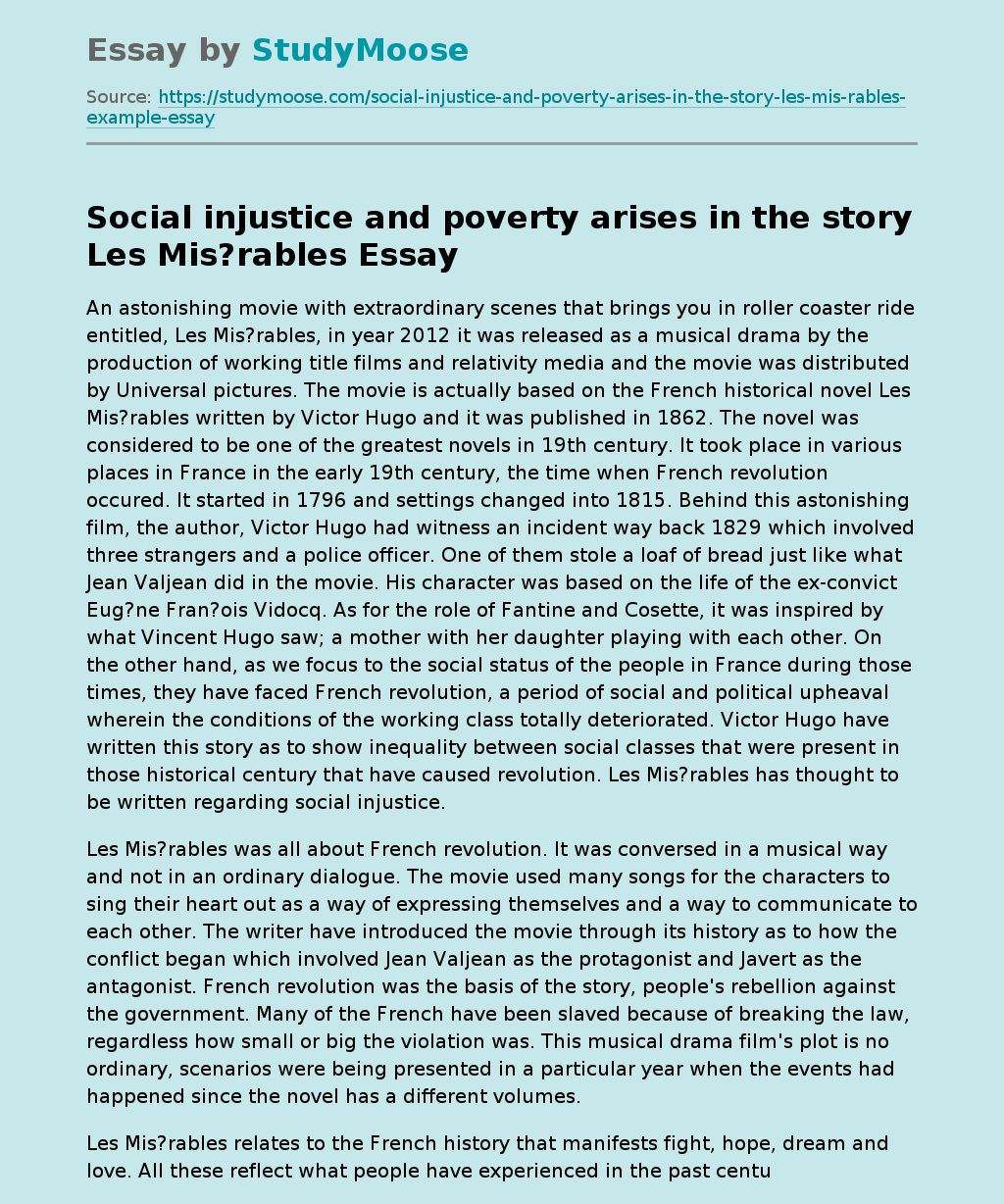