Assess how the social context may influence the ability of health campaigns to change behaviour in relations to health Health education takes place within the context of social and economic settings. All programmes for health-related behaviour change have a cost in term of resources, money, time or social and economic factors. In this report I will be talking about Jamie Oliver approach the strength and weakness of his healthy eating approach. For example Jamie Oliver strives to improve unhealthy diets and poor cooking habits in the United Kingdom and the United States but the government spend a lot of money to campaign his idea and to promote healthier school meals.

There is many strength of Jamie Oliver approach. One strength is Jamie Oliver’s school dinner has improved academic results. Number of absences is down after chef changed junk food menu.

The number of “authorised absences” — which are generally due to illness – fell by 15% in the wake of his 2004 Feed Me Better campaign, brought into the nation’s sitting rooms via the Channel 4 series Jamie’s School Dinners.

Also 75%of parents who expressed an opinion say there has been an improvement in school meals over the past 12 months. Of those who believe that school meals have improved, 44% think that Jamie Oliver is most responsible for the improvement. On the other hand the weakness of Jamie Oliver’s approach is that many children don’t eat school dinners because of his healthy campaign but buy junk food from local shop. According to Prue Leith, the restaurateur and former Government food advisor, has said Jamie Oliver’s school dinners campaign inadvertently drove children away from school meals to less healthy packed lunches Stats shows 60% are sent to school with packed lunches and 13% still buy their lunch from a shop or vending machine.

Also some parents pass their children fast food through the railings of their children school. In addition a 2009 study shows the number of children taking school meals had dropped by 400,000 over four years.

Jamie Oliver criticise the government saying they have let working women down. I think women have been let down by the government for 40 years. “Because 30 years ago, 12 per cent worked and now 60 per cent do. They’re taxed just like men; they have a lot more trouble getting to the top still. “And in actual fact, the one thing the government didn’t promise women when they went to work in volume was that their child would be taught how to cook and get fed properly at school. “And that’s what I’ve been fighting for, largely for women, for the last ten years. He added he believed politicians should do more to ensure children are fed properly during the day in working women absence. Financial constraints can be on individual and organisation. For individual there may be change of behaviour due to financial constraints. When changing your family lifestyle for a better lifestyle such as buying healthier food it requires more money and organic ingredients which is more expensive. The limitation of financial constraints on government is it cost lot of money to run the campaign.

Also they may not save money as not everyone has school meals and they don’t know if the campaign works as some children may not have school dinners. Financial constraints can also affect the culture on people as people have different culture and may require special dietary need. For example Muslim people need to have halal food so healthier menu need to reach people personal need. Changing their lifestyle might not meet their need so the healthy dinner may not use halal ingredient. Also some people may be vegetarian so there has to be catering for vegetarian so they are not excluded. Social factors may also prove a constraint. Such as peer pressure. Peer pressure is the influence of a social group on individual to conform to the behaviour of the group. Children and teenagers are the most vulnerable to peer pressure. It can influence a person lifestyle on what they eat as teenagers friends might persuade them into eating junk food instead of healthy foods for example at lunch time instead of eating the schools lunch which is healthy they might persuade them into eating PFC which is not healthy.

There was a great deal of variation in the level of concern felt by parents. In part there was variation by age, with primary school children less likely to be aware of who was and was not in receipt of Free School Meal (FSM). However, it was clear that stigma was eliminated if children were in schools where FSM recipients cannot be identified. For example, in schools where meals are pre-paid for or where cashless systems operate – such as a card based or biometric system. One mother interviewed stated that the card system they use at her child’s school means ‘all the kids are the same’. Some parent quoted “The menu at my child’s school is interesting, varied and nutritious.” On the other hand some parent believes their child gets bullied because they receive free school meal.

One parent quoted “They believe the staffs think they are worthless.” Also they believe the school doesn’t provide a large portion of food to fill up their children so they provide snack to their children such as sweets, crisp and drink so their children are not hungry throughout the day. To conclude this report Jamie Oliver campaign has it strength and weakness. There are many financial constraints on both individuals and organisation economically and socially. I believe Jamie Oliver campaign is a good thing as he is trying to tackle obesity and making people lifestyle healthier. However his campaign is making some children miss lunch or eating elsewhere such as buying junk food from local shop or buying chicken and chips from local PFC shop as school dinner do not taste pleasant anymore. 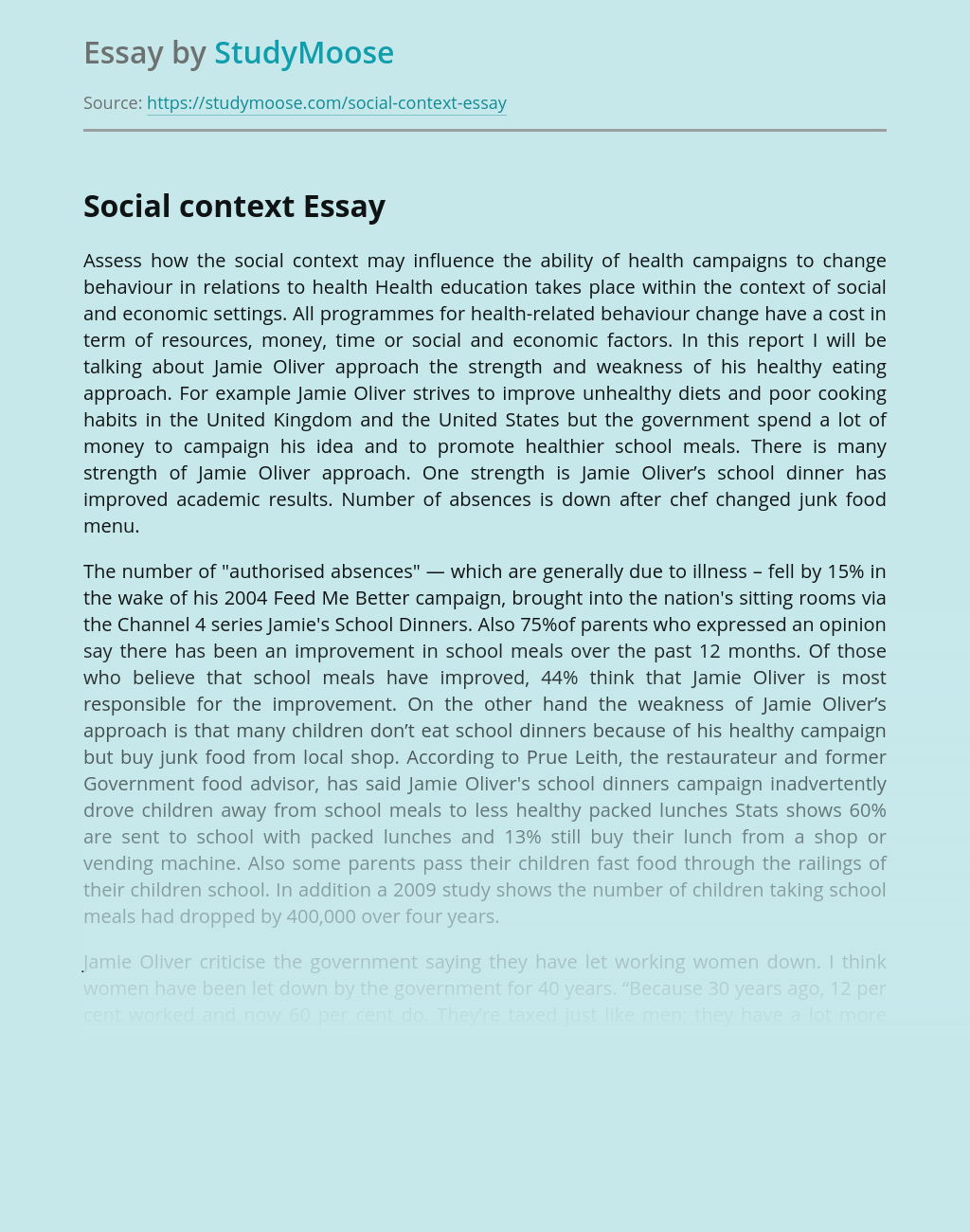