Social commentary on The Kite runner

? We are impacted by things that we read, see or hear on a daily basis, and whether we know it or not they change the way we perceive certain topics. Social commentary is often used by authors and/or artists to draw attention to ineffective elements of a society. This is present in the novels “Animal Farm” by George Orwell and “The Kite Runner” by Khlaed Hosseini. The “Animal Farm” is an allegory about a farm in which the animals revolt against the irresponsible farmer Jones after the Old Major dies and name it “Animal farm”.

Turn in your highest-quality paper
Get a qualified writer to help you with
“ Social commentary on The Kite runner ”
Get high-quality paper
NEW! AI matching with writer

The animals establish seven rules to live by, of which the most important is “All animals are equal”(Animal Farm 47). As the years pass by, though, the dynamics of the farm change and the pigs establish themselves as the ruling class. Orwell ridicules the way Russia tried to rebuild itself after the Bolshevick Revolution with this book. “The Kite Runner” is a novel written by Khaled Hosseini, in which he talks about the drastic difference between life in Afghanistan before and after the Taliban take over through the point of view of an Afghan boy named Amir.

The main themes in the book are love, forgiveness, betrayal, redemption, and ethnic pressure in Afghanistan, but he also focuses in abundance on the Taliban by using the characters’ life to show how much damage the Taliban cause to the country and population. The Taliban come into power after Russian troops invade Afghanistan, and they make the citizens believe that they are the salvation of the country.

Both novels deal with a group of people/animals that start a revolution against the ones in control, then gain power and impose even more severe rules which they corrupt, and end up forming a government more oppressive than the one they revolted against. Once the groups take over they give themselves higher authority than the rest of the population/animals, for example when Napoleon takes over he is called “the emperor” and the rest of the animals are called “comrade”(Animal Farm 47-8).

The Taliban does something very similar; they demand the population to treat them with respect. Amir finds that out when he comes back to Kabul to take Sohrab (given the fact that he lived in U. S. while the Taliban took over Afghanistan, he doesn’t know much about them, besides what he heard in San Francisco) and he stares at the Taliban when they drive by. His friend Farid informs him that when the Taliban move past he is supposed to look at the ground and not directly in their eyes, for the reason that they wanted people to almost bow down to them.

Both dictators impose unreasonable rules when they are in position of power. In “Animal Farm” Napoleon demonstrates that when he says that anyone who followed Snowball, the leader thrown out by Napoleon, would be executed. In “The Kite Runner” there are many scenes where the Talibs execute the opposition, for example Hassan refuses to leave Baba’s house and as a result he gets shot in the back of the head. Another intense case of unreasonable punishment takes place at the stadium where one of the Taliban Generals makes a speech about the Taliban’s duty.

He claims that the Taliban bring justice and carry out the Shri’a law, and they believe that if adultery is committed, the adulterers “throw stones at the windows of God’s house”; although the Shri’a law does not literally say that the Taliban imply that adulterers should be punished by being stoned to death, therefore it’s only right that they stone to death a woman and a man accused of adultery(Cleric 270). However, in both books the dictators corrupt the rules they impose, for example in the “Animal Farm” the animals have seven commandments they must live by but three of them get changed to suit what Napoleon does or decides.

There is another contradiction in the Taliban’s beliefs, because music was part of the entertainment banned by the Taliban, but when Amir goes to General Assef to take Sohrab, Assef plays music for Sohrab to dance to. The beginning of dictatorship in both books is caused by a presumed revolution. In “Animal Farm” the animals revolt against man, take over the farm, and expect to live at peace among themselves. In “The Kite Runner” the Taliban are supposed to get the Russians out of Afghanistan and bring back harmony in the country.

In both cases the leaders fail because the ambitions get the best of them and instead of living happy, they use the opportunity to dictate the others below. In the “Animal Farm” eventually the Seven Commandments are changed to one that read” All animals are equal but some are more equal than others”,which shows that the revolution is a failure in the farm because it makes the animals exactly what they were protesting against(Animal Farm 112).

The Taliban first become known for their ambition to free Afghanistan from the Russians, but once they come into power they impose insane rules against the population and outlaw every type of entertainment, even kite running. In the end the pigs and the Taliban turn into their enemies. Napoleon changes the name of the farm back to Manor Farm and in the final scene Napoleon and Pilkington (a neighboring farmer) are playing cards, although they act friendly, each is trying to cheat by playing ace of spades .

The other animals watch the scene and cannot tell the pigs from the humans. In “The Kite Runner” when the Taliban take over Afghanistan they change everything, Amir points it out when he comes back from America and he sees Kabul, he says “I feel like a tourist in my own country” which means after the Taliban had taken over, the country could’ve been easily ruled by strangers because there was nothing left of the Afghanistan he grew up in (Amir 231). Social commentary has a powerful impact in today’s society.

Khlaed Hosseini and George Orwell convey a strong message with “The Kite Runner” and “Animal Farm”; they show that when people strive for a goal but get no satisfaction when they reach it, they can turn revolutions in a government more oppressive and totalitarian. Works Cited George Orwell. , Animal Farm:A Fairy Story,1945. Print. Moran, Daniel. CliffsNotes on Animal Farm:27 October 2013. Web. Wikipedia, the free encyclopedia: Animal Farm : 26 October 2013. Web. Grade Saver LLC1999-2013: Animal Farm Summary. Web.

Social commentary on The Kite runner. (2017, Jan 04). Retrieved from https://studymoose.com/social-commentary-on-the-kite-runner-essay 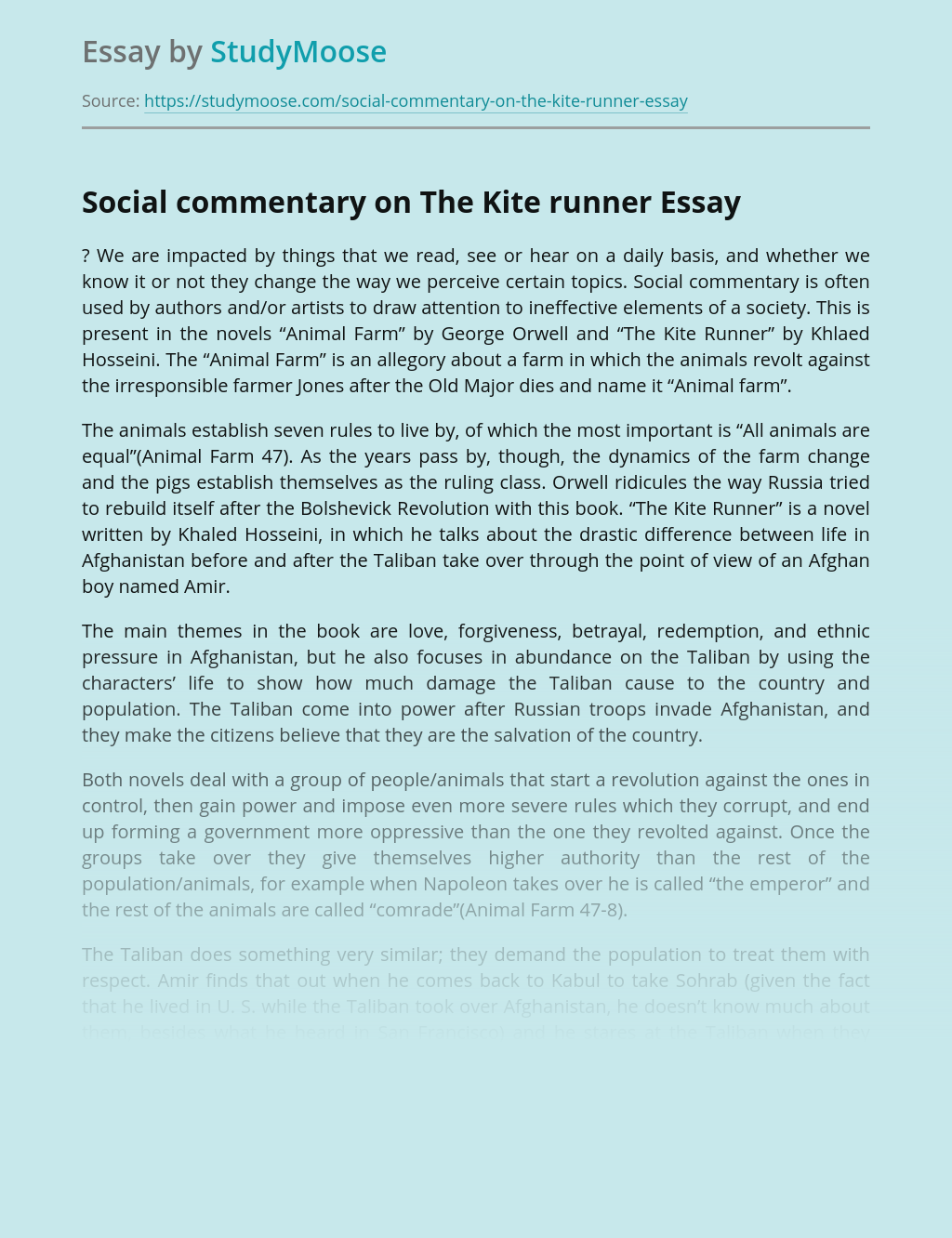 Turn in your highest-quality paper
Get a qualified writer to help you with
“ Social commentary on The Kite runner ”
Get high-quality paper
Helping students since 2015
Stay Safe, Stay Original