Social Classes in The Outsiders

Cherry said,¨ It is not just money. Part of it is, but not all. You greasers have a different set of values. You are more emotional.¨ In ¨The Outsiders¨, written by S.E. Hinton, there are two groups of different social classes. The theme of the story, violence is not a solution. The three examples from the story are violence takes away your innocence, violence causes death, and violence causes personal injury. Violence takes away your innocence because something that you don´t expect, happens.

Don't use plagiarized sources. Get your custom essay on
“ Social Classes in The Outsiders ”
Get custom paper
NEW! smart matching with writer

The first example of the theme is when Bob gets stabbed by Johnny. In this part of the story, Pony and Johnny were walking to the park. As they sat there, Bob and his Socs friends who had a blue mustang came and attacked Pony and Johnny. Unfortunately, Johnny accidentally killed Bob. Johnny said “ I had to, they were drowning you Pony. They might have killed you, and they had a blade….they were gonna beat me up ¨ (P57).

This quotation shows us it was Bob´s fault of dying because he and his Socs friends attacked Johnny and Pony while there were at the park.This is important because Johnny was defending himself and Ponyboy. The second example of the theme is when Dally got shot from the police because of the robbery grocery. In this part of the story, Dally was furious because his friend Johnny died in the hospital. As Dally was just running away from anger, he went straight to the grocery store and he robbed it.

After that, he ran as fast as he could. Unfortunately, he heard sirens, the police told him to stop running. He stopped but something unexpected happened. Dally was carrying a heater but it was not loaded. Dally pretended that he had ammunition and the police thought Dally was going to kill him. Accidentally, the police shot Dally as he was pretending he had gun and bullets. Pony says “ Dally did not die as a hero. He died desperately, just like we all knew he will die someday¨ (154).

This quotation shows that Dally wanted to die because he had an awful life, criminal record and he did not have anyone to support. This is important because instead of having trouble every day, killing humans, dying might be better for him. violence causes personal injury because Ponyboy got hit by soc with a lead pipe. The third example of the theme is when Pony had a concussion because he was kicked in the head during the rumble. In this part of the story, Pony was walking down the hall in a daze. He must have wandered around for hours; sometimes even out into the street, getting honked at and cussed out. He might even be stumbled around all night except for a man who asked him if he wanted a ride. While he was riding the man’s car, the man asked if a ponyboy was oḱ. And said to him that “ I hate to tell you this but your bleeding’ all over my car seats¨. Ponyboy reached up to scratch the side of his head where it’d been itching for a while, and when he looked at his hand it was smeared with blood. Darry said, “ I told you-you were in no condition for a rumble.”(156)

This quotation shows that Darry really cared about his young brother and he treated him as if he was his dad and mom. Dally told him not to go to the rumble because Ponyboy was sick. This is vital because when you are not ready for something you must stop doing it. We all know that Ponyboy did that for his friend. I have a personal connection with the theme because when I was back home, I used to be a fighter. I stopped fighting because I grew up and it means that my nature changed as I grew older. In one example, I remember that I fought with a boy who used to go to the same school as me.

I fought with him because he insulted my mom and I could not handle myself. After some days the boy who insulted my mom moved to another city. He apologized to me and I forgave him. In a second example, I had another fight with another boy back in my country, I fought with him because we were playing soccer on the beach sand and he broke my hand but I did not fight with that day, I fought after I recovered. We did not apologize to each other but his family came to our home to say sorry.

Social Classes in The Outsiders. (2021, Dec 02). Retrieved from https://studymoose.com/social-classes-in-the-outsiders-essay 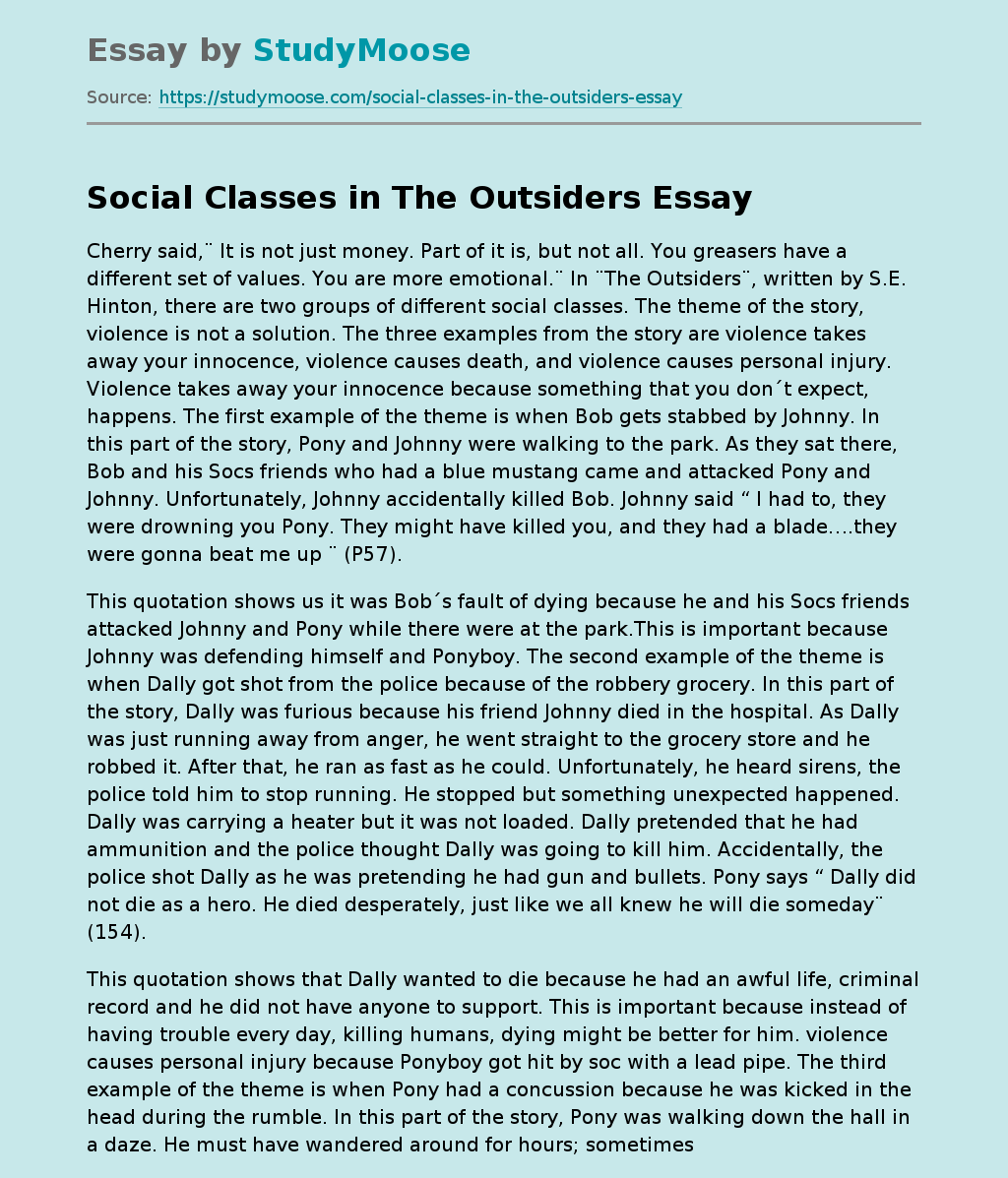