Discuss social class in ‘Madame Bovary.’ Is Emma a sophisticated aristocrat born by mistake in a bourgeois prison, or is she simply a middle-class girl obsessed with a richer life? Make detailed references to the text in order to support your points.

In the novel, ‘Madame Bovary,’ Gustave Flaubert emphasises the importance of social class: all of the characters have a place in the social hierarchy, with obvious distinctions between lower, middle, and upper classes. The lower classes are represented by those who work for the Bovarys’: Felicite and the wet nurse, in addition to the old beggar and to an extent, Justin.

Don't use plagiarized sources. Get your custom essay on
“ Social Class in Madame Bovary ”
Get custom paper
NEW! smart matching with writer

The upper class consists of Rodolphe, the guests of the ball in Part I, and even, Charles Bovary’s classmates in the very first chapter. The Bovarys are part of the middle class, much to the disappointment of Emma. Emma is obviously part of middle-class society, but whether she belongs there requires further analysis.

‘Madame Bovary’ is about a beautiful woman, who is enchanted by the novels she reads, and ends up in a boring marriage, looking for the excitement she reads about.

This eventually leads her into adultery, first with Rodolphe, and then Leon. Even her affairs are not as her novels describe them, and she continually has problems either with her husband or her lovers. Her obsession with material goods leads her into debt, and eventually drives her to suicide.

Madame Bovary could be seen as an aristocrat who is mistakenly born in the wrong section of society.

Before her marriage to Charles, Emma lives on a farm with her father, and, even after many years there, she is still not good at menial tasks and housework: “…as she was sewing, she kept pricking her fingers, and then she put them to her lips to suck them.” (Pt I: Ch 2) This phrase suggests that even though she does household tasks, even at her age, she still isn’t good at it. It suggests she doesn’t belong in such a society in which she has to do routine jobs, and her current life does not suit her. This is further proven by the phrase, “Mademoiselle Rouault did not greatly enjoy living in the country, especially now that she was almost entirely responsible for the farm.” (Pt I: Ch 2) The more responsibility she has in the farm, the less she likes it, suggesting that she does not belong in the place, much preferring to live in the city, where she is not forced to do any dull jobs, but rather, what she pleases. Even after she returns from the city, it is still the same: ” Emma, home once again, at first enjoyed managing the servants, then began to loathe the countryside.” (Pt I: Ch 6)

This phrase shows that the only aspect of going home that she enjoyed was, ‘managing the servants’, something often associated with the upper class, yet she hated the farm itself, which is often connected to middle and lower classes. Read about lifestyle of the poor and rich

What also shows that Madame Bovary could be seen as an aristocrat, is that she settles into city life quickly, and prefers it over the countryside. This can be illustrated by the phrase, “…her past life, always so vivid, was vanishing without a trace.” (Pt I: Ch 8) This suggests that even though she has already forgotten a lot about her past life in the countryside, it is becoming more and more vague to her as she continues to live in the city, suggesting that she does not miss country life, and prefers town life over it. She even feels as if farm life had been, “a unique accident that had befallen her alone” (Pt I: Ch 9) suggesting how much she disliked it, and how much she prefers city life over it, suggesting that she does not belong in the social class she is in. Furthermore, Emma even learns the ‘waltz’ quickly, despite never learning that before, while dancing at the ball: “Round and round the room they went…she could certainly waltz, that woman!” (Pt I: Ch 8)

In addition, it could be argued that Emma was ‘too good’ for the life she lived, and she deserved better than being part of the middle-class society. Part of this is her good education: ” Mademoiselle Rouault…had received, as they say, a good education, and that consequently she knew dancing, geography, drawing, embroidery, and playing the piano.” (Pt I: Ch 2)

Even with her bourgeois status, Emma knows many things solely associated with aristocrats and upper classes (dancing, embroidery, piano). Even her father is of the opinion that she is better than the life she has: “…he made excuses for her, thinking her too educated for farming, an accursed occupation, one that never made any man a millionaire.” (Pt I: Ch 3) This further emphasises she does not belong in the middle-class societies.

As well as her good education, it is also believed that Emma is too attractive to be part of lower classes: “Leon walked around the room; he thought it strange to see this beautiful woman in her cream cotton dress, in the midst of such misery” (Pt II: Ch 3) This quote further implies that Madame Bovary does not fit in middle or lower class societies, only more flattering atmospheres and places seem to suit her. She is also seen as, ‘a lady of fashion’, which is confirmed by her dress and manner: “…showing off on Sundays in church in her silk dress, like a countess.” (Pt I: Ch 2)

On the other hand, Madame Bovary shows much interest in the ‘rich’, and it could be that her aristocratic behaviour is only a result of this. Madame Bovary is extremely fond of material goods, and her love for them even results in major debt: “Madame bought herself a hat, a pair of gloves, a bouquet” (Pt II: Ch 15). She even refuses to take piano lessons for two and a half francs, rather than the expensive lessons: “She shrugged her shoulders and didn’t open her piano again” (Pt III: Ch 3)

This suggests she is clearly obsessed with expensive things, as even cheap piano lessons with a well-know teacher isn’t good enough, simply because they do not cost.

Further evidence of Emma loving anything materialistic is shown in the phrase: “She would look at it, open it, and then breathe the scent of its lining, a mixture of tobacco and verbena” (Pt I: Ch 9)

Emma has an evident love for anything materialistic throughout the novel, as it makes her appear more aristocratic and even, attractive, suggested by the phrase: “She sent down for ices, she wanted to smoke cigarettes; he [Leon] thought her extravagant, but adorable, superb.” (Pt III: Ch 5)

This indicates that she prefers the high society lifestyle over her conservative, bourgeois upbringing. It shows she is consumed by richer life and does anything to make her appear part of the elite.

She is also extremely concerned with her appearance, trying to cover up her middle class appearance as much as possible: ” They [her nails] were lustrous, tapering, more highly polished than Dieppe ivories, and cut into an almond shape. Yet her hands were not beautiful.” (Pt I: Ch 2) This shows how much attention she puts into her appearance, to make her look as if she belongs to the upper-class, although she is obviously not (‘yet her hands were not beautiful’).

She seems to be interested in anything which is usually associated with the rich: she is interested in her father-in-law’s travels, as she has not travelled herself (suggesting her bourgeois lifestyle) yet doesn’t mind his company as she loves to learn about his experiences: ” His daughter-in-law was by no means unhappy in his company. He had seen a bit of the world: he used to talk about Berlin, Vienna, Strasbourg, about his days as an officer, the mistresses he’d had, the big lunches he’d been at.” (Pt II: Ch 3) In addition, Madame Bovary begins to learn Italian, further emphasising her obsession with high society lifestyle: “She decided to learn Italian: she bought dictionaries, a grammar, a supply of paper.” (Pt II: Ch 7) Having not travelled, as well as not already knowing another languages, already suggests that she is indeed middle-class and concerns herself too much with upper-class activities.

This is further proven when Emma goes to the ball, meant for upper classes, and is surprised by the behaviour witnessed: ” Madame Bovary noticed that several of the ladies had not put their gloves inside their glasses.” (Pt I: Ch 8) Not having your gloves in you gloves suggests that you want to be served wine, and Emma is clearly unaware of and not used to these customs. In addition, as her husband becomes successful, and his reputation spreads, Madame Bovary seems to be more proud of him, and begins to love him more: ” He saw his reputation spreading, his prosperity increasing, his wife loving him perpetually; she found herself happily revived in a new sentiment, healthier, better, happy to feel some tenderness for this poor boy who so adored her.” (Pt II: Ch 11)

This shows that she is not in love with her husband, but rather his success, and the prestige he brings to their family. When his operation is deemed a failure, she is immediately filled with rage, and all love she previously had for him had been lost.

Emma can be seen as an aristocrat; she does, after all, possess traits which we usually associate with the upper class. However, Emma is part of a bourgeois family, and it is highly unlikely that she would be raised to be an aristocratic woman. She is married to an adequate doctor, and before marriage, had lived in the countryside. However much she prefers or likes the high society lifestyle, she is part of the middle class by birth, and even after her marriage to Charles she is still lives a bourgeois lifestyle, despite her attempts to be more aristocratic through the amount of material goods she owns. 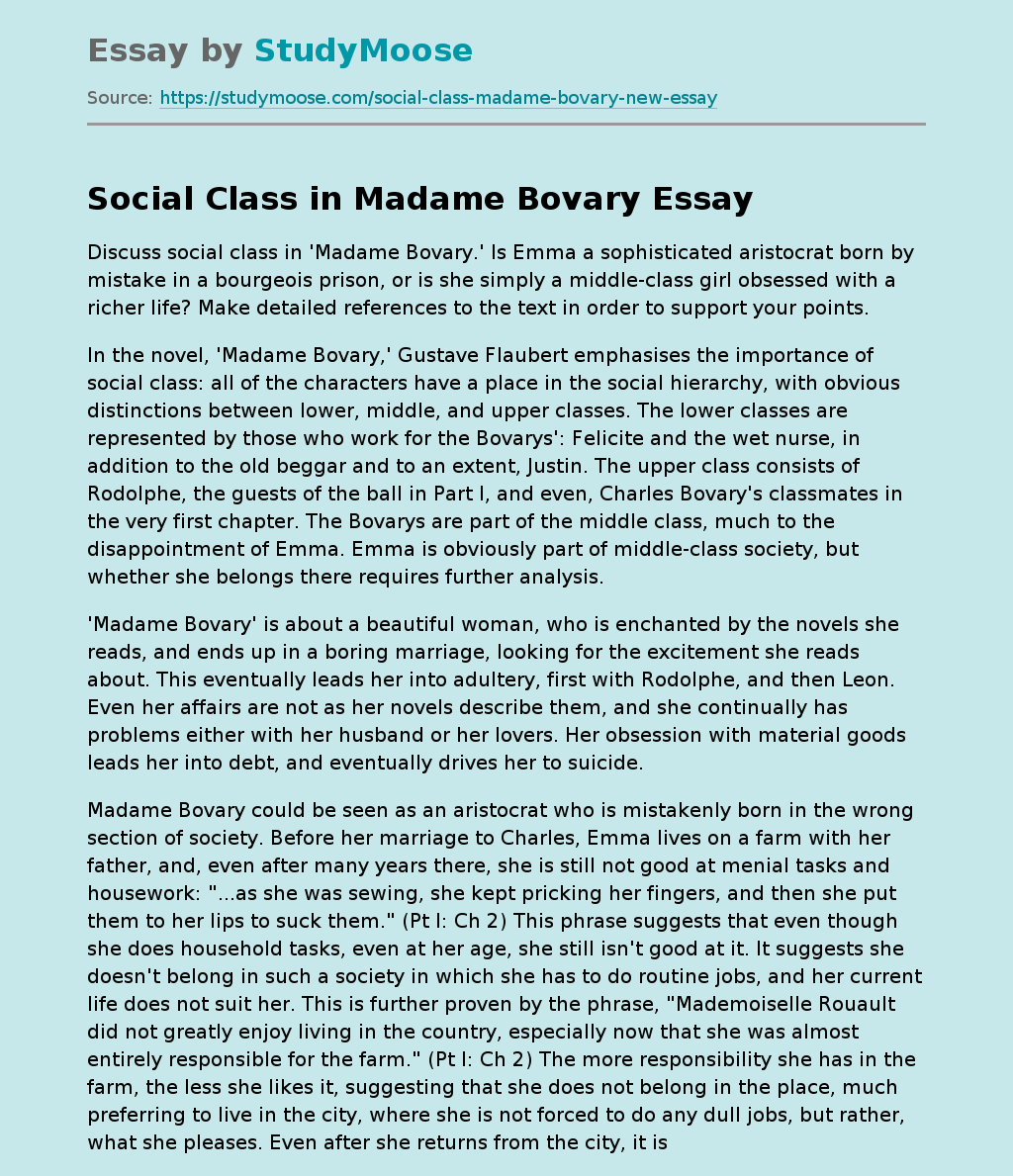