Social class is still the determinant of voting behaviour

‘Social class is still the main determinant of voting behaviour.’ Discuss. In some ways, this statement is correct, however, as society is evolving this is becoming less and less apparent. The change in voting behaviour based on classes started to change between 1945 and the 1980s, where the class de-alignment occurred. This was the decline in the relationship between social class and voting. After World War II, the distinctions between the classes became less important as the country had fought a war together, and everyone struggled because of it, no matter of their class.

Don't use plagiarized sources. Get your custom essay on
“ Social class is still the determinant of voting behaviour ”
Get custom paper
NEW! smart matching with writer

The period from the 1960s to the 1970s also showed changes in society. The distinctions between the classes eroded due to an increase in prosperity. Many more people were entering into higher education, and there was a significant rise in female workers. In the 1980s a ‘new working-class’ emerged; the private sector grew dramatically, most people were entering work with better qualifications, and the number of home owners increased.

All of these things contributed to the class de-alignment, as distinguishing between the social classes became harder, and therefore more of a challenge for parties to target one specific class.

Tony Blair brought in the ‘new labour’, intended to be a ‘catch all’ party which aimed to please everyone, regardless of ethnicity, gender, region and class. Tony Blair strived to unite the country and in his victory speech he said he aimed to achieve ‘a Britain that is one nation, with shared values and purpose’. This made his party extremely popular and Tony Blair won the election with a majority of 179 seats. Since the ‘new Labour’ success, the main parties do not tend to target individual classes, but instead aim to unify the country with policies that will benefit all.

However, in modern day government there is still some aspect of class based policies. This is shown in the 2010 general election, where Labour was still the most popular party among the working class and Conservative still perform best among the middle classes. Before and during the class de-alignment, many people still tended to vote for their ‘natural’ party, i.e. the party that best represented their class, and there is clearly still an aspect of this today. An example of this is during the Labour party conference, where party leader Ed Miliband used, to his advantage that he did not go to the best private school in the UK, unlike rival Conservative David Cameron.

He stressed that his background gave him an advantage as he was more at level with the working classes and could understand their needs better than David Cameron. This shows that in some ways the Labour party are traditionally targeting the working class as they have done for centuries. Although there is a lot of evidence to suggest that class is still an important determinant of voting behaviour, there is a stronger argument against class alignment. Since 1945 until present day class has become almost insignificant in society, and due to the success in ‘new Labour’, class has become less of a target in modern day politics. All the parties at present are pushing a ‘united country’ attitude and are striving to achieve a unified and equal society.

Social class is still the determinant of voting behaviour. (2016, Apr 27). Retrieved from https://studymoose.com/social-class-is-still-the-determinant-of-voting-behaviour-essay 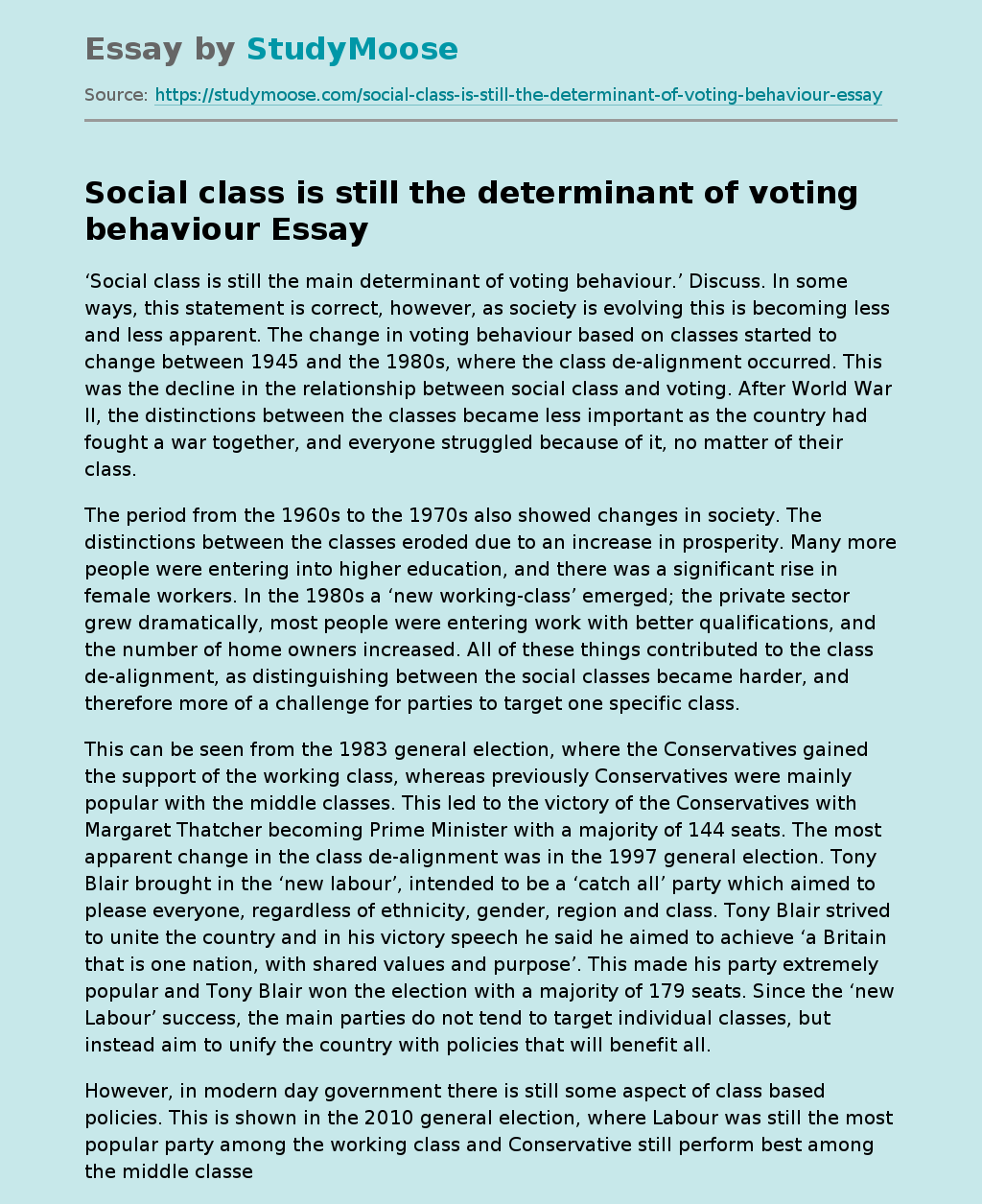