Sports are the activities that require people to conquest the field and it is all about the victory and cooperation. There are always competitions to determine the winner and loser, and friendly handshake would acknowledge defeat and victory. The sports often create a sensation among the spectators and entertain people. There are abundant sports in the world that can play with feet or hands. Soccer and American Football are main sports that can represent feet and hands sports and these sports are indeed popular among the spectators.

Don't use plagiarized sources. Get your custom essay on
“ Soccer and American football compare and contrast ”
Get custom paper
NEW! smart matching with writer

Football and soccer games are very interesting, but there are similarity and differences. Soccer is fairly straightforward sport and people in the world simply call it football. To prevent confusion, I will use the term soccer to differentiate it from America’s dearest sport, American Football. The most obvious difference between the soccer and aggressive American football is that soccer is played mainly by kicking the ball and it is only the goalkeeper who can handle the ball.

American football, in contrast, is played by throwing and catching the ball like a bulldog attempting to catch the bone thrown by dog’s owner. In American Football, players require tremendous strength and muscle to prevent injury because they are like crazy bulls that since their target are set, have no mercy; an enemy would get crashed and end up being a pancake. Actions like bone-crushing hits, beating each other and bashing players are often seen in American football. Soccer, in contrast, is not ignorant like the American Football.

Soccer players require intelligence, fit body as football requires, but the soccer is play by the passing plays and intelligent tactics made by managers. Soccer also has physical contact, but players do not intent to do beat each other up because there are referee to protect from an injury. If we are to describe the relationship between soccer and American Football, an old gentle man with healthy body and an aggressive child would be correct because soccer has been around for 120years while football has been around for not even a hundred years.

American football is virtually loved by only North Americans and refers football as the worldwide sport by naming their biggest competition title as “World Series”. In the “World Series”, only North American professional teams attend the competition which does not make any sense according to the title. Apparently, they have their own festival within their land calling it “World Series”. For Soccer, they do have a competition name “World Cup” which involves all of the countries in the world. Each continent country has to qualify for the World Cup by winning the qualifying round.

This indicates the soccer is the dominant team sport across South America, Africa, Europe, and Asia and the American Football only in North America. The American football will guarantee hundred percent excitements, but only for North Americans, perhaps some people around the world. Soccer and American football are worlds apart and this comparison essay proves how those are different. It is your choice to watch which sports you like, but would you like to watch people getting serious injuries or brilliant skills with feet with fabulous team passing plays? 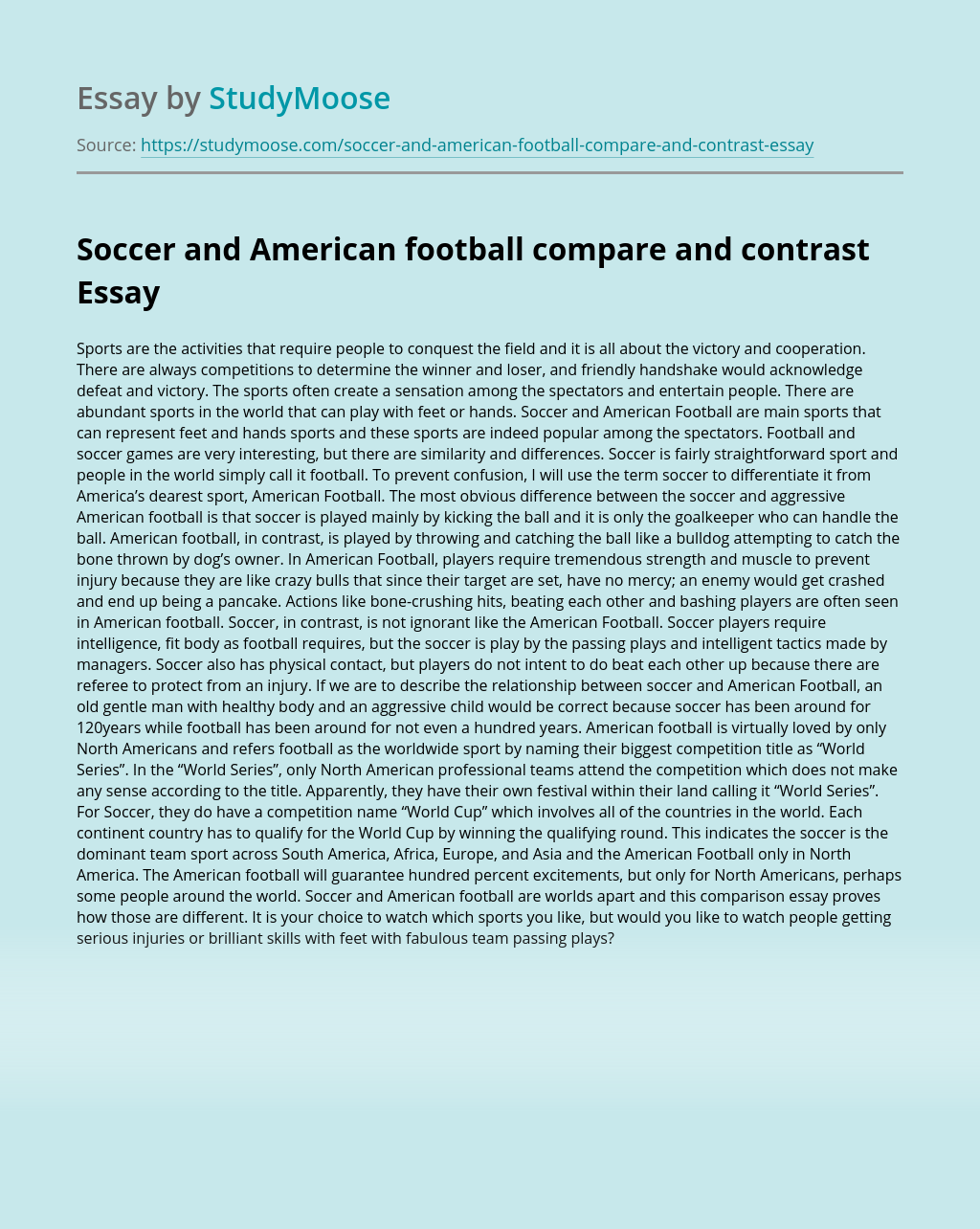