How it All Began

A murder. One that would change this town forever. It was said that on the last night of summer a young kid by the name of Casey Locke was seen at the local town diner Ollie’s having a milkshake with his family, and after that night, he was never seen again; that is until about a month later when a gruesome discovery was made.

It would later be told in the coming days that Hayden Nichols, well off on a morning run, came upon a body.

It wouldn’t just be any random body he stumbled across; it would be that of missing high schooler Casey Locke. The discovery of Casey’s body raised questions all around town, people wanted answers, they wanted to know what happened, but nobody could predict the secrets that would soon be unraveled.

No one seemed to know why Casey ran away, as anyone who knew him said he lived a blessed life.

He was a star soccer player, a talented writer, an overall great student, and a friend to everyone. People close to him always seemed to mention his great smile; some would soon say that this smile helped keep some dark secrets hidden; but I wouldn’t know anything about this until later.

I’m Reggie Jones, and I am one of the few who lived in this small town, the one where everyone knew everything, gossip spread like wildfire, and no secrets went unknown. I’m now just beginning college, but I remember starting high school, when some weird things began to happen, that would change my seemingly small hometown, Oaksburg forever.

People tend to call me the loner kid, or the outcast, except for my neighbor and best friend, Lizzie Greene, she has been by my side for as long as I can remember, but this isn’t about my life, it’s about all those lives in a seemingly small town that changed forever after such a tragic event, and a group of teens that fought to unravel this continuously plot twisting mystery.

Now you’re probably wondering, who are these kids that I speak of, well one of them is me, and soon enough you’ll meet the rest of the gang.

Being the outcast, I tend to stick out everywhere I go, but when I have the seemingly gifted football star as my best friend, it helps to scare them off. That’s right, the ever so flawless, perfect, Chris Donahue, happens to just be best buds with the loner kid.

It just so happens, that Chris and I grew up across the street from each other and have had each other’s backs since the beginning. Whoever thought that we would go from playing video games all day long, to being investigators, solving one of the biggest crimes to ever happen in Oaksburg.

Now you know Chris is my childhood friend, and you’ve learned that Lizzie is my best friend and neighbor; now we get to meet the next member of the mystery solving group.

It was about a week before Casey ran away, a new family had moved to town. They are known as the Rose family. There arrival into town came at such an uprising moment, and things only continued to get weirder the more we investigated. The Rose family consisted of five people. They were a mother, father, a teenage boy named Zephyr, a teenage girl named Zella, and a younger sister named Celia.

Zephyr and Zella would be in the same grade as the rest of us, and in the weeks to come Lizzie and Zella would grow a close bond with each other. This will soon be very important to the mystery solving group; as it will be discovered that the Rose family didn’t just randomly choose to move to Oaksburg.

These six young sophomore misfits will soon be known for their incredible skills in sleuthing around and cracking open one of the biggest mysteries ever kept; all while clearing a few innocent names in the process. It’s just one big whodunnit mystery, and all the answers seem to circle around a murder. So, who would be considered suspects, in what looks like a clear case of a teen who just ran away and tragically passed before being found; well let’s find out what the gang unearthed in their discoveries.

The Victim and His Family

The victim. Casey Locke, a fifteen-year-old sophomore at Oaksburg High. He’s known for his athletic ability, incredible level of intelligence, and being a friend to all. So why would such an amazing person run away from their life?

It all begins in the coming weeks that led to his disappearance, and the last known people to see the victim; his family. The Locke family. They were a mother, father, young son, and daughter named Olivia Locke. These three people would be the first considered suspects for the mystery group to investigate.

The father. Andrew Locke, a local businessman, and all around family person, no one would ever consider him being a suspect in his own son’s murder case, but there have been some well kept secrets, that could make Andrew Locke look like an all-around criminal capable of any crime; including his own son’s murder, to keep his reputation spotless.

The mother. Amy Locke, a local writer and reporter for the town newspaper, The Oaksburg Herald. Everyone around town knew her as the soccer mom, the one who is involved in her kids’ lives, no one could believe that after finding out about her son’s murder, she went about her life as if nothing had changed.

The sister. Olivia Locke, a fourteen-year-old freshman at Oaksburg high. She is a member of the cheerleading team, and just like her brother, is known for having an incredible level of intelligence. Her and Casey were quite close, and they were regulars at the local town diner, Ollie’s, owned by Oliver Nichols.

Lizzie and Zella’s friendship continued to flourish, and within the coming weeks, secrets came to light about the Rose family and why they up and moved their whole family to Oaksburg. Rumors started circling about the family, one was about how the family could be witnesses in hiding, another was the exact opposite where they were on the run, and others that were even more wild than that.

Lizzie confronted Zella about the rumors and promised that whatever was said would stay between the two of them, and it did until Lizzie got home later that night and called me. The father had gone into hiding after a corrupt business deal, and the charges being brought against him by the police.

Dark secrets ran rampant all through the town, it didn’t stop at the Rose family, and didn’t stop shy of narrowing down a list of suspects. The Rose family weren’t the only ones trying to keep the past secret; our next suspects turned the town upside down. The Oaksburg family. Allison is a member of the group, her mom is the mayor, her dad the town sheriff, and no one took likely to the can of worms our group had just opened. 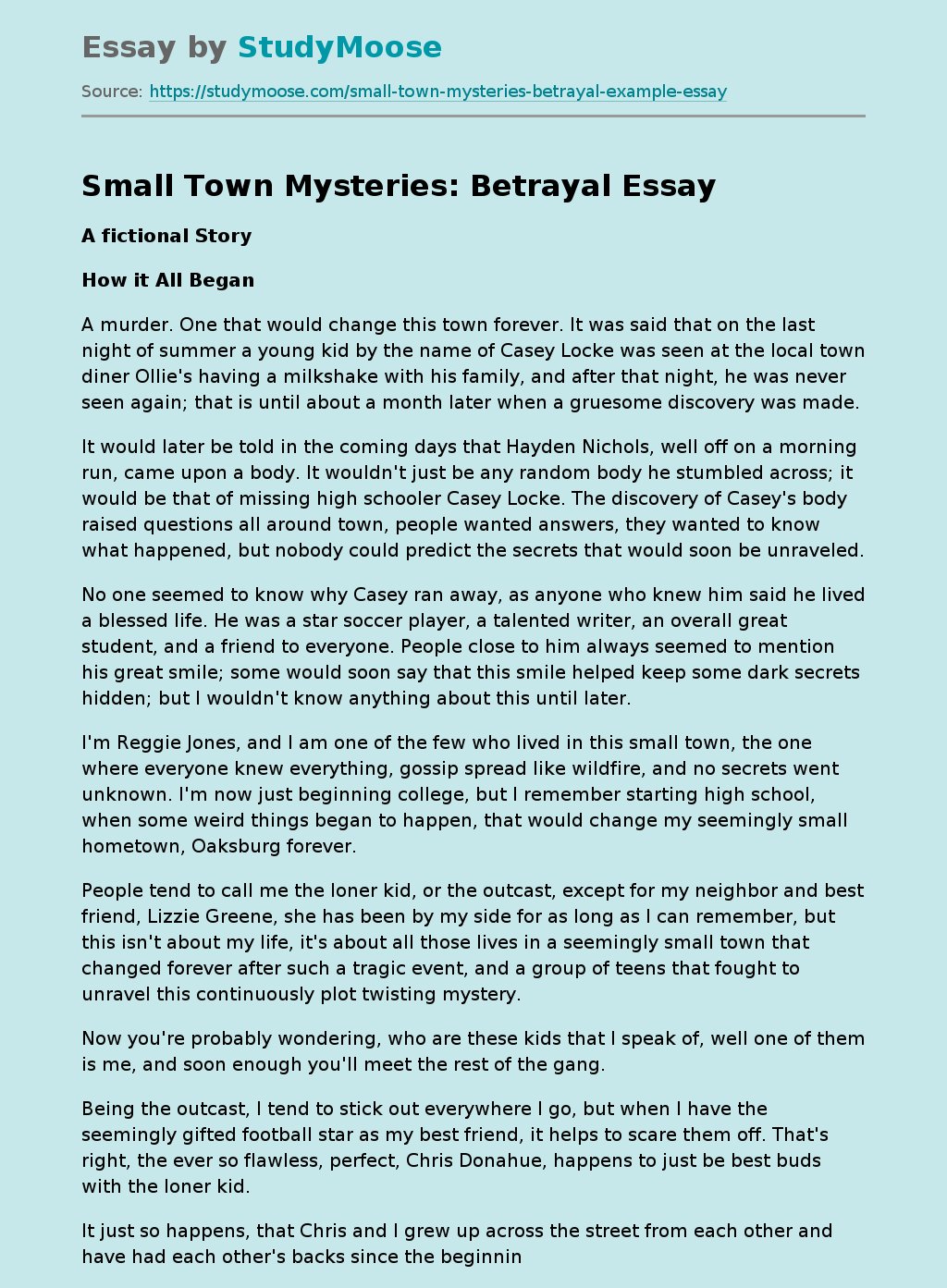