Sleep duration and quality has a major role to play in effective cognitive emotional and social development in children. Sleep problems are seen in all age groups and developmental life span such as early infancy, late infancy, early childhood, late childhood and adolescence. An overview of normal developmental patterns of sleep, the changes in each stage is required in order to diagnose sleep associated problems and their implications. Sleep disorders are under diagnosed in paediatric practise. In an Australian population of children aged 4.

Don't use plagiarized sources. Get your custom essay on
“ Sleep Related Habits and Problems in a Community of School Children in Delhi ”
Get custom paper
NEW! smart matching with writer

5 years to 16.5 years parents addressed sleep problems only in 4.1% of the cases and General Practioner discussed sleep problems in 7.9 % of cases. (1) Medical conditions or inappropriate behavioural patterns at bedtime interfere with sleep organisation and are associated with arousals. Sleep organisation i.e sleep awake schedules need to be consistent and age appropriate, for example naps are encouraged as they are important for infants and toddlers unlike for older children. Sleep organisation includes earlier bedtimes for younger children as compared to an adolescent for whom a later bedtime is permitted in accordance to the shift of the internal clock.

Proficient in: Importance Of Sleep

Appropriate sleep conducive environment is required across the developmental spans.

Polysomnography is the gold standard diagnostic tool. (3) Severity of OSA is determined by the apnoea/hypopnoea index (AHI). Apnoea is defined as absence of airflow with continued chest and abdominal wall movements for a duration longer than 2 breaths , whereas obstructive sleep hypopnoea is decreases nasal flow between 30 to 80 % from baseline with corresponding decrease in oxygen saturation by 3% and/or arousal. (4). SDB has clinically suspected if the child has the following symptoms in sleep, the child snores, has trouble breathing while sleeping, struggles to breathe, gasps, snorts becomes sweaty, breathes with an open mouth, has a dry mouth on waking up or grinds in sleep.

Behavioural sleep problems includes behavioural insomnia in children, which is characterised by a learned inability to fall asleep and /or stay asleep, It includes bedtime problems such as stalling or resistance to sleep, difficulty in falling asleep and associated night awakenings. Childs temperament, circadian preferences, medical illness, neurodevelopmental disabilities, psychological issues such as anxiety /depression, ability of caregiver to set limits and other inadequate sleep hygiene practices contribute to BIC.

A consensus definition of paediatric insomnia is repeated difficulty in sleep initiation, duration & consolidation or quality that occur despite age appropriate time opportunity to sleep which .resulted in some daytime impairment for child and family was proposed by Mindell etall..(5)

ICSD -2 defined 3 subtypes of behavioural insomnia in children based on aetiology of bedtime problems and night awakening. Sleep onset type BIC which is, commonly seen between 6months to 3 years, resulting from inappropriate associations such as rocking movements, watching television or requiring presence of parent. Limit setting BIC which is commonly seen in toddlers, preschoolers and school children, resulting from inadequate or inconsistent limit setting practices by parents, resulting in delaying or avoiding bedtime by strategies such as asking for use of bathroom or another story, etc. Combined type of BIC including both patterns. (6)

2014 revision ICSD -3 no longer separates insomnia into diagnostic categories but includes terms such as chronic insomnia, short term insomnia and other insomnia disorders. (7) The aim of this study was to evaluate the sleep problems due to SBD and bedtime behavioural patterns that may contribute to the development of BIC, their associations and implications.

The parents of 201 pediatric patients aged 6 to 13, who attended the pediatric outpatient clinic for various medical problems, duly consented to fill up the questionnaire in collaboration with their child if he/she cooperated. This questionnaire was explained to the parent in detail and their queries if any, were answered. This questionnaire is based on the sleep questionnaire University of Michigan USA and has been validated by another study done 2008, in Safdarjang hospital New Delhi. (8) This questionnaire contains questions pertaining to demographics, present or past medical history, family history of snoring or apnoea, sleepwalking, sleep terror nightmares or bedwetting. It included questions of bedtime such as how long it takes to fall asleep, usual bedtime, wake time. It included 61 questions related to bedtime behaviours and associations, sleep behavior, morning waking behaviours and any associated problems, daytime behaviours. Each question was rated as usually(5 to 7), sometimes (2 to 4), and rarely(0to1). It included questions for teachers and the parent was asked to get teachers observations on excessive activity, napping short attention span, falling grades marked as yes/no and duly filled in by their class teacher.

SDB was defined as being clinical present if even one of the following symptoms were present ie snoring, snorting, troubled sleep due to difficulty in breathing, breathing with open mouth, dry mouth on awakening grinding.

Sleep patterns contributing to development of BIC were divided into a) sleep association habits ie either needing rocking rhythmic movements to sleep, needing an object or a parent to sleep. b) Inadequate limit setting was stalling either due to struggling/resisting sleeping or stalling because of any fears.

Sleep patterns either sleep association or inadequate limit setting if associated with night awakenings or symptoms of daytime sleepiness were considered fulfilling the spectrum of BIC.

The morning symptoms on awakening, suggestive of poor sleep included for the study were feeling unrefreshed, headaches .negative mood and taking a long time in becoming alert (decreased alertness ), on awakening.

The parameters of daytime behaviour that were included for the study were, decreased concentration, inattention and fatigue.

Sleep is an essential physiological mechanism of rest for conserving energy and restoring physiological functions. It is essential for a primary care physician to know about normal developmental changes in sleep patterns, distinguish them from sleep problems and identify consequences of poor sleep. Equally important for both the physician and the caregiver is a knowledge of essential sleep hygiene practices, which promote behavioural and environmental habits to bring about adequate sleep duration and quality.

In early childhood total sleep duration decreases to13-11 hours .10% wake up once per night, however in our study we found 14.9% of subjects waking up at least once, and 18.4% waking up more than once. This age group is increasingly sensitised to reward and punishment. School children (6-11yr) sleep about 10-11hours, daytime napping is rare. (10) Less than 10% of 6yr old nap. (11) Girls sleep more than boys (12) and less than 10% of 6yr old nap. (13) Sleep in school going age group age is affected by school social obligations and multiple bedtime stimulating activity and peer relationships leading to negative associations and increased bedtime arousals.

This along with other factors in school children ie delayed sleep onset increased time in bed leads to psychophysiological insomnia as a result of conditioned anxiety around difficulty in falling asleep, staying asleep, emotional arousal and negative associations in sleep thus, developing poor sleep habits

Adolescent undergo a delay in time of sleep by 2hours by biological and social factors. The biological factor is hypothesised to be delayed release of melatonin. (14) 20-30% children in cross sectional studies have significant bedtime sleep problems and in most cases have behavioural cause and solution. Behavioural sleep problems are seen in all age group. Behavioural sleep problems typically present with at least one of the following: bedtime stalling or resistance, difficulty in falling asleep, night awakening or excessive day sleepiness.

25% of children experience difficulty with some aspects of sleep. (15) 27% of children in USA are sleeping less than recommended for all ages. (16) There is high prevalence of 20-30% behavioural insomnia the most common sleep disorder. Prevalence is lower for sleep apnoea 1 to 3 %.sleep related movement disorder 2-8%, parasomnia such as night terror 5-35%. (17) Suri JC in his study conducted in Delhi (8) found the overall prevalence of SDB to be 4.8%and that of snoring to be 12.7%. Additionally SDB was positively correlated with enlarged tonsils, tonsil surgery, nasal allergy and asthma. He conducted polysomnography in a subgroup of 50 children who snored{a number considered statistically significant} as snoring was considered high risk of SDB.

In this study 31.8 % (64 patients) were found to have at least one symptom s/o SDB ie Snoring, trouble sleeping, snorting, open mouth breathing, dry mouth on awakening and grinding. Snoring was reported in 10 % of the patients. There was a significant positive correlation of symptoms of SDB with medical conditions, with symptomatic problems on morning awakening, day time behaviour and night awakening.

Snoring, open mouth breathing, grinding were all associated with daytime fatigue, additionally snoring was associated with inattention and snorting with decreased concentration.

All symtoms of SDB were positively correlated with an average of at least 3 patterns of night awakening.

Behavioural patterns, ie Sleep association habits or problems with limit setting contributing to the development of BIC in children were seen in 111 (55.2% ) children. The children in our study were 6 years and above however 2% still needed rocking/rhythmic movements to sleep, 3% needed an object to sleep amd 34.8 % needed one parent to sleep. 11.4 % children reported stalling either by struggling or other resistance. 36.8 % of children reported stalling as they were afraid of dark.

Only 3 patients (1.4 %), actually sought help for sleep disruption due to medical condition of enuresis, thereby indicating a lack of awareness of sleep associated problems.

Sleep Related Habits and Problems in a Community of School Children in Delhi. (2021, Feb 04). Retrieved from https://studymoose.com/sleep-related-habits-and-problems-in-a-community-of-school-children-in-delhi-essay 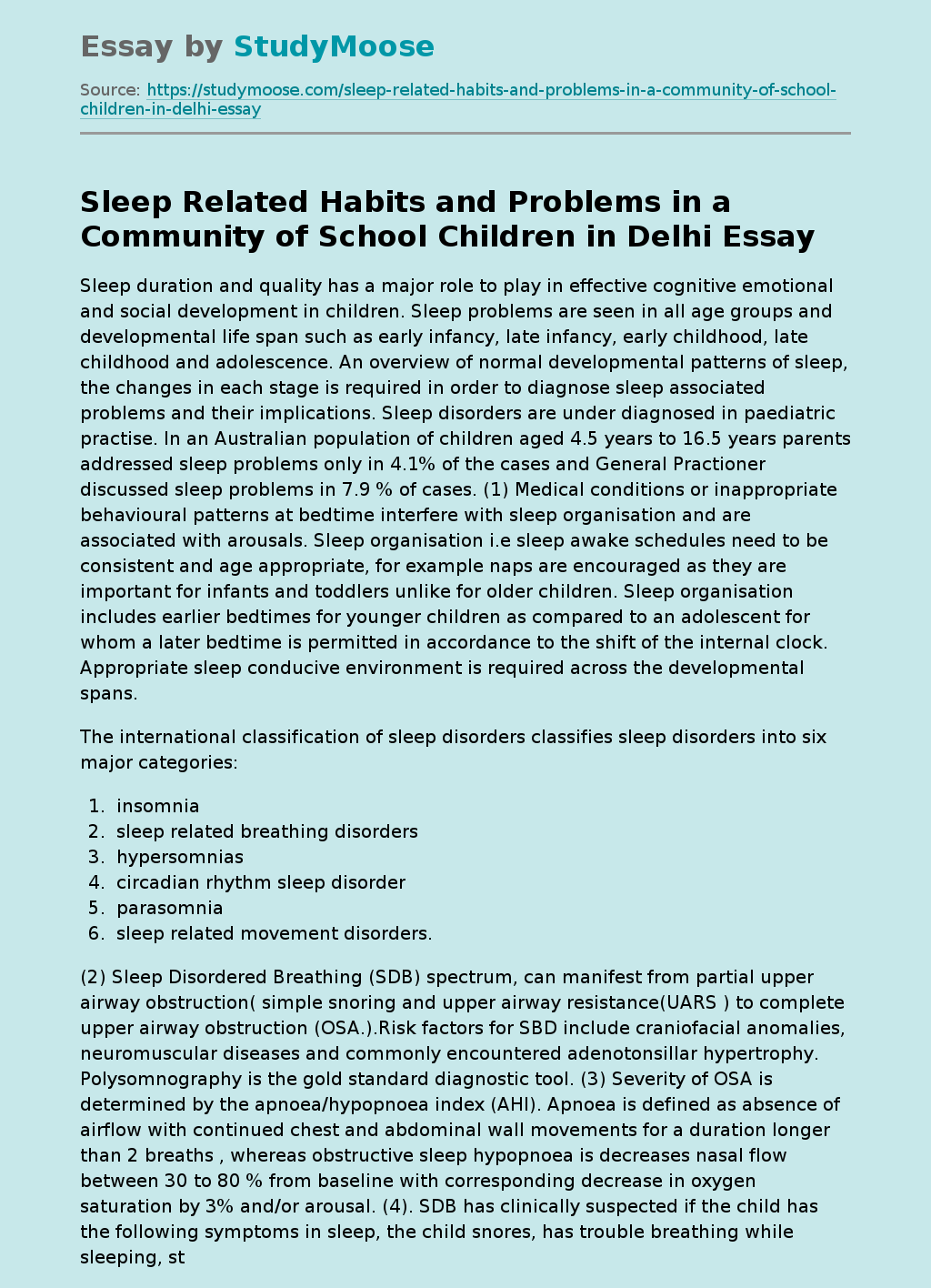