Don't use plagiarized sources. Get your custom essay on
“ Slavery Theme in Killing the Black Body ”
Get custom paper
NEW! smart matching with writer

Robert argues that throughout American history, the reproductive capacity of black women has been used against them constantly as a means of racial oppression, control, and devaluation. Since the times of slavery, the institution of black motherhood has been minimized and disgraced. For instance, black women were forced to become pregnant. They faced the threat of sterilization through coercion.

Black women were vigorously implanted with Norplant, denied welfare because of their procreation, and were imprisoned due to reproductive choices.

Their children were taken away and sold to different slave-owners. During the times of slavery, black women were sexually exploited for reproductive reasons and in order to oppress and humiliate the black community. Roberts discusses in Killing the Black Body: After Emancipation, the Ku Klux Klan’s terror included the rape of Black women, as well as the more commonly cited lynching of Black men. White sexual violence attacked not only freed Black men’s masculinity by challenging their ability to protect Black women; it also invaded freed Black women’s dominion over their own bodies (pg.

Sexual harassment was a means of forcing blacks into submission; this tactic created a somewhat obedient abor force. Besides these motives, black women were denigrated through use of their reproductive capacity as a form of slave breeding. During the times of slavery, black women were forcefully impregnated both in order to maintain the institution of slavery and as an economic incentive for white slave owners to control the reproductive lives of black women. A black woman’s child was considered the property of her slave owner from the moment of conception. This key feature in the institution of slavery gave whites the ultimate power of repression against blacks in America.

Despite this fact, black women fought back. They took initiatives such as self-induced miscarriage in order to not bear a child. Unfortunately, these women were punished for taking such initiatives; however, they were reprimanded for the wrong reasons. As Robert demonstrates: Indictment further alleged that on December 11, so “that she might more speedily kill and murder said Angeline,” she wrapped the baby in bedclothes and then “choked, suffocated and smothered” her.

Historian and former federal judge A. Leon Higginbotham, Jr. , asks two important questions about this case. First, he questions Missouri’s purpose in convicting Jane for murder: Did the state prosecute because it cared about the dignity and life of a child born into lifetime slavery with the concomitant disadvantages of Missouri’s law? Or did the state prosecute because Jane’s master was denied the profit that he would have someday earned from the sale or exploitation of Angeline? pg. 49). This illustrates that white men devalued black women by not only using them as a source of reproductive means but also by dehumanizing their black children as the courts convicted these mothers in order to protect whites’ financial stake in the children, but not out of respect for the children themselves. Hence, black women were an economic resource for whites, utilized for sustaining slavery and significantly devalued as well as objectified.

Salters (2013) states in her article a recent event where a doctor was accused of illegally videotaping and photographing over hundreds of patients – mostly women of color – during their medical procedures in John Hopkins’ East Baltimore Medical Center, which serves low-income African-American women. This scenario is an ultimate example of the continuation of a long history of dehumanization as well as objectification of Black women as their nude and vulnerable bodies were recorded without their consent.

Robert further argues for an idea of reproductive liberty that identifies race as an important reproductive rights issue. She states that the experiences of Black women since slavery has shaped the present day interpretation of reproductive freedom. Robert’s book, along with the content we have discussed in class, has given me a more eye-opening understanding of the racism that still exists in America currently. A concept that reoccurs today since slavery is the idea that whites have defined the notion of woman and fetus.

A Black women’s main value as a slave was to produce offspring, which is producing more slaves for the whites. If the pregnant slaves fought or rebelled against the demands of their owners, they were punished without harming the economically profitable fetus inside the slave. Robert notifies: Williams recounted the beating of pregnant slave women on a Mississippi cotton plantation: “I[‘]s seen nigger women dat was fixin’ to be confined do somethin’ de white folks didn’t like.

Dey [the white folks] would dig a hole in de ground just big ‘nuff fo’ her stomach, make her lie face down an whip her on de back to keep from hurtin’ de child (pg. 31). From the start, these form of acts performed by the white owners marked Black women as objects whose decisions about reproduction were subjected to social regulation rather than to their own will. Furthermore, by punishing these pregnant slaves, whites’ implied the message to these women that they were nowhere nearly as valuable as the unborn child that they were carrying.

This concept demonstrates the existence of racism in today’s society as it is repeated through accounts of Black women being forced into cesarean sections, prenatal care and other medical treatment “for the good of the fetus,” because the women are considered too selfish or illiterate to choose for themselves. This is also witnessed when pregnant Black woman are imprisoned for smoking crack and only cases regarding crack smokers are aimed at due to racist intentions, while ignoring the utilization of other drugs. These women have their babies taken away from their care and forced into crowded foster homes.

They are often sent to jail while pregnant “for the betterment of the fetus” and are forcefully implanted with Norplant as a condition of probation, regardless of all the complications that come with carrying on such an implant. Moreover, welfare is seen as only for white women and Black women were to blame for having children they knew they could not afford to raise. Women of color are consistently punished for their decisions regarding procreation even today, as charges are dropped if these women, who smoked cracked during pregnancy decided to abort. 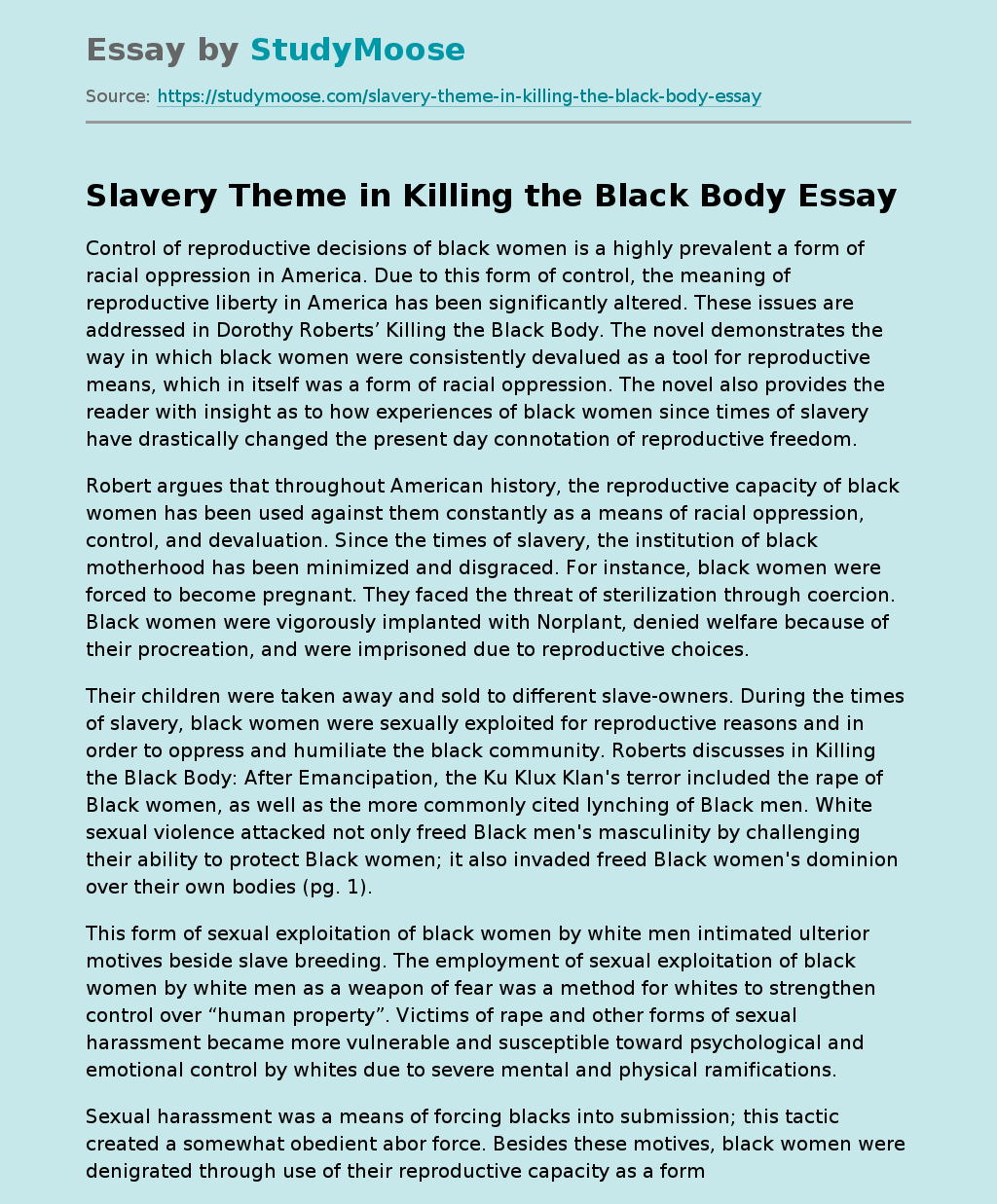