Slavery in the United States of America

Thesis: The reaction to the decision varied by region and political party, but the shockwaves created a strong opposition in which it was criticized by northerners, Republicans and abolitionists as they refuse to accept the decision by a Court they felt was dominated by “Southern fire eaters”.

The institution of slavery had it’s grasp tightly on the United States till the establishment of the 13th amendment abolished it in 1865. Within the United States, the states were divided into two polar sides with the biggest designation of the border between the Northern and Southern states being the issue of slavery.

Don't use plagiarized sources. Get your custom essay on
“ Slavery in the United States of America ”
Get custom paper
NEW! smart matching with writer

Throughout its existence, the United States had tried to keep a balance of free and slave states but this feat was a hard to accomplish as more territories requested for the status of states with the national initiative of western expansion.. These debates over the question if a state should be considered a free or slave states sparked many oppositions from both sides of the spectrum.

Prior the ignition of the Civil War many oppositions had risen to eradicate or at least lessen the influence of slavery in the states. One of the many controversial events which caused outcry and opposition in the United States was the infamous Dred Scott v. Sandford decision of 1857. The case began when a slave by the name of Dred Scott appealed his case to the Supreme Court. Unlike most slaves however Scott had what he believed was a legal claim to his freedom. Scott had been the slave of Doctor John Emerson an army surgeon who had taken him to live on military bases in the free state of Illinois and later to Fort Snelling in what is today Saint Paul Minnesota at that time present-day Minnesota was part of the Wisconsin Territory in 1846.

Scott filed suit in a Missouri court to gain freedom for himself or his wife Harriet and for their two children, arguing that living in those free jurisdictions had made him and his family free, even after returning to Missouri. However the Supreme Court ruled the plaintiff, Dred Scott, was still a slave, and therefore, had no right to file suit in a United States court as he was not a citizen and did not have the rights of such. Thus the decision implied Congress could not stop slavery in the newly emerging territories and declared the Missouri Compromise of 1820, which prohibited slavery north of the parallel 36°30´ in the Louisiana Purchase, to be unconstitutional. The Court also declared the case violated the Fifth Amendment of the Constitution which prohibits Congress from depriving persons of their property without due process of law. The reaction to the decision varied by region and political party, but the shockwaves created a strong opposition in which it was criticized by northerners, Republicans and abolitionists as they refuse to accept the decision by a Court they felt was dominated by “Southern fire eaters”.

Opposition from the Press

Northern reaction to the Scott decision came quickly and ferociously. These states, mostly made of mainly Republicans and abolitionists, were outraged by the injustice and bias in which the Supreme Court had ruled by. Most contributors by far was the roar of anger and defiance from anti-slavery newspapers like the Chicago Daily Tribune, New York Daily Tribune and the Evening Journal, who all opposed the decision as a “moral assassination of a race”. The New York Tribune deemed the majority ruling an obiter dictum, “entitled to just so much moral weight as would be the judgment of a majority to have congregated in any Washington bar-room.” One in particular even went far as to state Dred Scott dissipates the most in which the United States had been enveloped in for years and that it exposed all the “deformities, the slave heresies” which has disturbed the country for more than half a century. The impassioned message in this quote, which served as a call to action, became commonplace in other Northern editorials. Many of the Northern articles denounced the politics of the Dred Scott decision by critiquing either a certain aspect of the decision or an opinion of one of the Supreme Court justices. One such article was entitled, ‘Dred Scott on the Missouri Compromise,’ from the Chicago Daily Tribune which

The furious reaction to the Dred Scott decision in the North compelled anti-slavery politicians to boost themselves in the fight against slavery. The group which was at the forefront of the battle was the Republican Party which responded angrily to the ruling in the Scott case. Since the decision implied even free states could be open to slavery, and allowed slaveholders living in a free state to keep their slaves for an indefinite amount of time, many from the the Republican party, like Abraham Lincoln, perceived this as a threat to democracy and feared this could pave the way for the nationalization of slavery. Generally this reaction was vitriolic as republicans refused to accept the authority of the Court’s decision, claiming it effectively denied the legitimacy of the core issue of the Republican Party. Republicans also attempted to portray the decision as a proslavery conspiracy, one that included members of the Supreme Court. J.T. Brooke once stated that ‘it has been repeatedly alleged that the Dred Scott decision was a `got-up case,’ contrived by interested politicians to secure a judicial decision of a political question.’ At the stern of Republican opposition was Lincoln, who persistently declared from virtually every platform available to him his implacable opposition to Dred Scott. He went so far as to accuse President James Buchanan and members of the Taney Court, not without reason, of conspiracy in the case. This conspiracy, generally, rose when Republicans noticed a brief intercourse at Buchanan’s inauguration between the President and the Chief Justice, who administered the oath of office, and took that as a sign of a conspiracy between the executive and judicial branches. Eventually this conspiracy fed onto others such as the slave power conspiracy which claimed the highest power of the government was controlled by also was highly utilized by Lincoln especially during his nominations for the Senate. This conspiracy claimed the highest level of government was controlled by anti- abolitionists whose ultimate goal was to force slavery into every part of the Union. The other and most unified political opposition came from the state legislatures of the northern states who showed their refute toward the decision by taking cohesive legislative action toward the federal government..In Connecticut, after Governor Alexander H. Holley sent a message to the legislature in May 1857 attacking the Dred Scott decision as “tending to nationalize slavery”, the legislature responded with denunciatory resolutions, as well as with bills declaring free any slave brought into the state and redefining state citizenship to include slaves. The New Hampshire State Legislature took a more controversial step than the legislatures of other northern states by presenting a resolution that would give “all races and colors the same rights as white citizens.’ In New York, the people considered the decision as an attack on their sovereignty

Denied legal existence, excluded from ‘the people,’ African Americans faced a unique rhetorical problem. In challenging the decision, the voiceless used their voice; those who were told that they did not count, that they did not exist, spoke. African Americans were placed in an unresolvable bind, imprisoned within the United States while functioning as what Priscilla Wald calls ‘visible symbol[s] of non personhood.’ Placed outside the boundaries of citizenship, pushed wholly outside ‘the people,’ African Americans were forced to adopt a rhetoric that would challenge the social and legal hierarchy. A rhetoric of this magnitude not only required them to expand the truncated ‘people,’ but also to prove their value as members of the human family. African American responses to the decision were quite broad, ranging from urging emigration to Canada to criticizing the decision as ‘a palpably vain, arrogant animation, unsustained by history, justice, reason or common sense.’ The first set of responses, those of Robert Purvis and Charles Lenox Remond, attempted to incite an insular community by uniting a limited, exclusively African American people to oppose Dred Scott vocally and potentially violently. The second class of response, those of William C. Nell and various African American state conventions, combined redemptive and insular strategies by promoting an inclusive definition of ‘the people’ through a ‘memorialization’ of the nation’s founding. Finally, Frederick Douglass offered a fully redemptive resolution that reinforced the Constitution’s promise for all people.

As provided in this analysis, this loaded decision, one of the most controversial in general added to the fire which became to be known as the American Civil. was supposed to solve the slavery question once and for all and more importantly mitigate the nation’s growing sectional crisis, ended up creating more tension in the country between the North and South. It was in sense wholly a question of “whether the Cuffeeshould be kept in his normal condition or not”, but most importantly it truly brought to a head the tension surrounding the issue of slavery in the United States. These enthusiastic reactions to thus ameliorate decision,, eight years after Taney passed on the Dred Scott choice, demonstrate exactly how impactful a choice has on the country. The Dred Scott choice would, in any case, keep on assuming a job in American governmental issues and society long after it should have been made insufficient by the Thirteenth, Fourteenth, and Fifteenth Amendments. It remained a factor in American governmental issues and society as now on the grounds that, however by law, blacks were free residents of the United States, they were yet curbed and treated as sub-par compared to whites in American society. Historian Don E. Fehrenbacher itemized in his book “The Dred Scott Case”, how government judge, John Minor Wisdom, asserted in 1968, that ‘it was Brown v. Leading group of Instruction that ‘deleted Dred Scott;’ for simply after that milestone choice in 1954 were Negroes ‘no longer beings of an inferior race- the Dred Scott article of faith.’All things considered, the Dred Scott choice had a profoundly felt effect on American governmental issues and society, with the best reaction against it happening in the North. Around at that point, the nation was part on paying little mind to whether the decision was the reaction to the enslavement question or a hazard to American chance, yet, all Americans were participated in their conviction that the Dred Scott case and its debatable decision would have been a basic accomplishment in American history.

Slavery in the United States of America. (2021, Apr 26). Retrieved from https://studymoose.com/slavery-in-the-united-states-of-america-essay 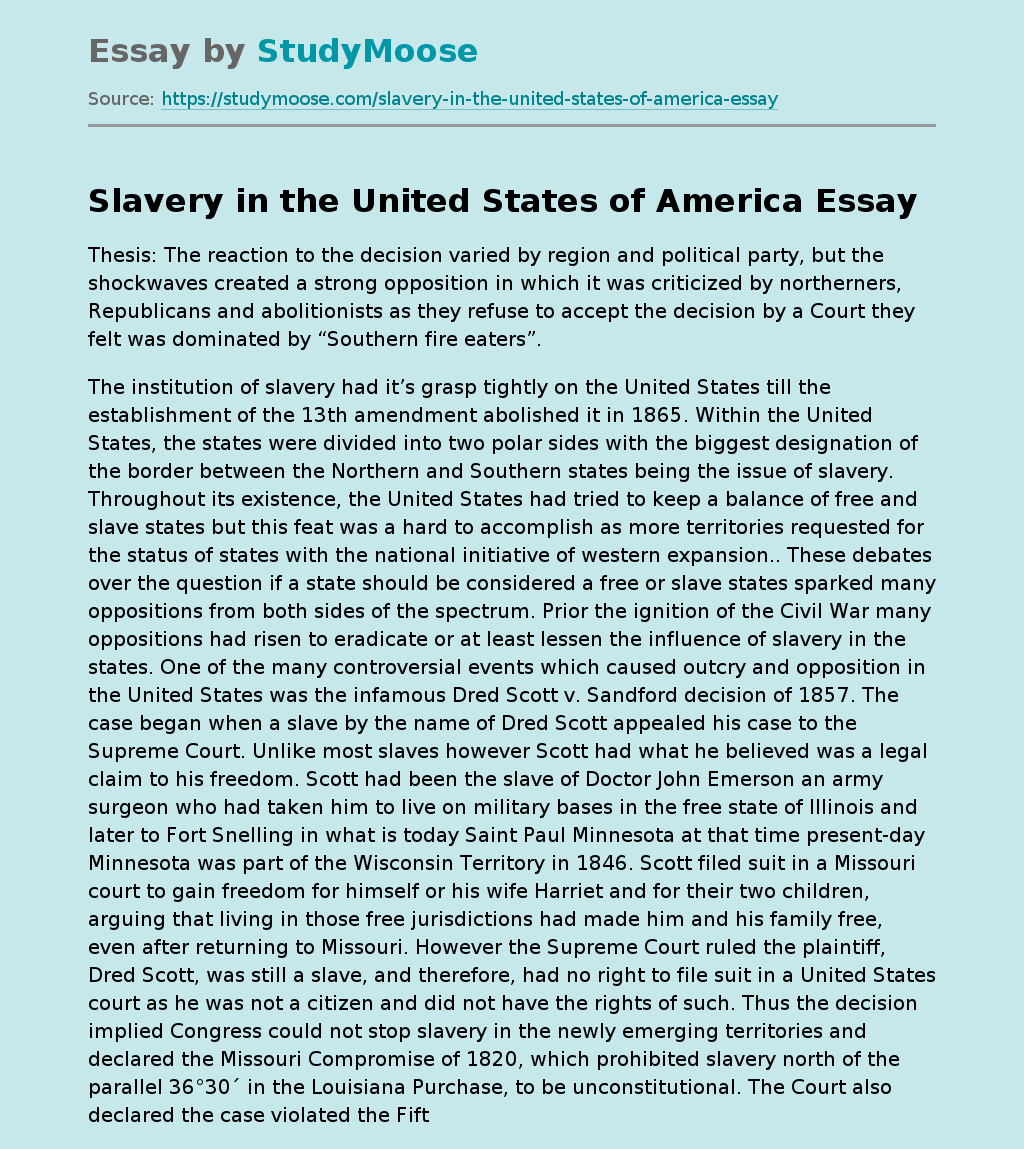