Slavery in the Chocolate Industry

The case “Slavery in the Chocolate Industry” discusses labor exploitation in the chocolate industry.

Don't use plagiarized sources.
Get Your Custom Essay on Slavery in the Chocolate Industry Just from $13,9/Page

It specifically addresses the cocoa beans grown on farms in West Africa, especially the Ivory Coast and Ghana, which make up close to half of the world’s chocolate. The cocoa farmers of these nations, however, often rely on slaves to harvest their beans, and in some cases, enslavement of young males (Velasquez, 2006). This paper will discuss the various ethical issues raised by this case, whether the slavery is viewed as absolutely wrong or relatively wrong, and who shares in the moral responsibility for the slavery occurring in the chocolate industry.

Slavery in the chocolate industry raises many ethical issues. First, systemically, it relates to the economic system within many countries that rely heavily on many exports, including cocoa beans. In the beginning, as cocoa prices increased across the world, the Ivory Coast Government encouraged the cultivation of cocoa and even gave various incentives for growing such.

However, cocoa prices around the world have lanquished over the years (Hall, 2005). In part due to chocolate manufacturers around the world encouraging more and more developing nations to grow cocoa, thus driving down the price of cocoa (“Chocolate and slavery,” n.d.).

The fall of the cocoa prices in 1996 and 2000 significantly impacted the livelihood of the already impoverished cocoa farmers in West Africa, who’s dependence on an unstable export crop, forced the cocoa farmers to use slavery to reduce their labor costs to survive (Velasquez, 2006). Another systemic issue relates to the legal aspect of slavery in the chocolate industry. According to Ivory Coast labor laws, slavery on farms is illegal (Velasquez, 2006). However, it is rarely enforced due to “open boarders, shortage of enforcement officers, and the willingness of local officials to accept bribes from members of the slave trade” (Velasquez, 2006).

Next, as it relates to corporate ethical issues, many of the exporters of the cocoa, who serve as middlemen by obtaining the cocoa and making it available for sale in their country of origin, along with numerous manufacturers who buy from these distributors, contribute to the slavery in the chocolate industry. For many years these corporations have known that the cocoa beans exported and used in its manufacturing process were partially if not fully harvested with slave labor. Yet, they have maintained that they were not responsible for the slavery in the various cocoa producing countries because they have no control over the cocoa farms (“Chocolate and slavery,” n.d.). These corporations use an easy excuse to ignore the problem because they profit richly from its chocolate products. Only recently, from the negative publicity received through growing media coverage about slavery in the chocolate industry was there pressure placed on the chocolate industry to address the issues raised.

As a result, the members in the industry signed a “Memorandum of Cooperation” in which they agreed to work toward ending the use of slavery in the Ivory Coast. Through this memorandum the Chocolate Manufacturers Association agreed to fund training of the cocoa farmers, and monitoring and certification of the cocoa beans (Velasquez, 2006). However, little progress has been made and it would appear that the industry, nearing the memorandum deadline, is now stating that the responsibility for monitoring and certification now lies with the government of the Ivory Coast. It would seem that the industry’s lack of progress to support a real solution, such as inacting Fair Trade Certified cocoa, which would ensure a stable and sufficient wage for the cocoa farmer, continues to perpetuate the slavery problem and the industry’s enormous profits (Global Exchange, 2005).

Lastly, there are a couple individual ethical issues that surround slavery in the chocolate industry. At the heart of the issue are the cocoa farmers who continue to use slavery, even child slavery, to harvest cocoa beans even though it is illegal to do such and immorally wrong to take anyone, much less a young child, unwillingly. In addition, any consumer of chocolate from a company that potentially uses cocoa beans harvested with slaved labor contribute to the continuation of slavery in the chocolate industry. While the media is bringing forth the disturbing facts about slavery and chocolate many consumers choose to just ignore.

There is a cultural variable to consider, as many of the cocoa farmers have their own children help in the cocoa bean cultivation and see nothing wrong in using child labor. However, in my view, any kind of child labor is absolutely wrong regardless of the society one may live in. The case stated that young boys are kidnapped, sold, and forced into harvesting the cocoa plants. The farmers use various tactics and punishments to force completion of the work and provide inhumane living conditions. While this is the extreme sense of child labor referred to as child slavery, I do not believe that children should be used for labor nor can they always handle the labor that an adult endures. Furthermore, it presents an opportunity for a child to be wrongfully taken advantage of because of their lack experience and knowledge. I feel it would benefit developing countries more, economically and socially, if the children of its country could obtain an education and better themselves, thereby bettering its country.

In conclusion, I believe there are a multitude of people and groups that share the moral responsibility for slavery occurring in the chocolate industry. While slavery is most prominent in West Africa because they are the leading exporter of cocoa beans, slave labor exists in many of the world’s agricultural sectors (“Chocolate and slavery: child labor in Cote d’Ivoire,” 2002). Through the various trade relations, many people are inevitably implicated in this problem, whether it is the Ivory Coast Government, the farmers, the chocolate manufacturers, or consumers who both knowingly and unknowingly buy chocolate (“Chocolate and slavery: child labor in Cote d’Ivoire,” 2002). Anyone reading this article gains in depth awareness of the unethical behaviors occurring in the chocolate industry. Certainly, it will make you think twice about your moral obligation just with the thought of chocolate.

Global Exchange. (2005). _The news on chocolate is bittersweet_. Retrieved July 10, 2007 from http://www.globalexchange.org/campaigns/fairtrade/cocoa/chocolatereport2005txt.html

Slavery in the Chocolate Industry. (2016, Jul 25). Retrieved from https://studymoose.com/slavery-in-the-chocolate-industry-essay 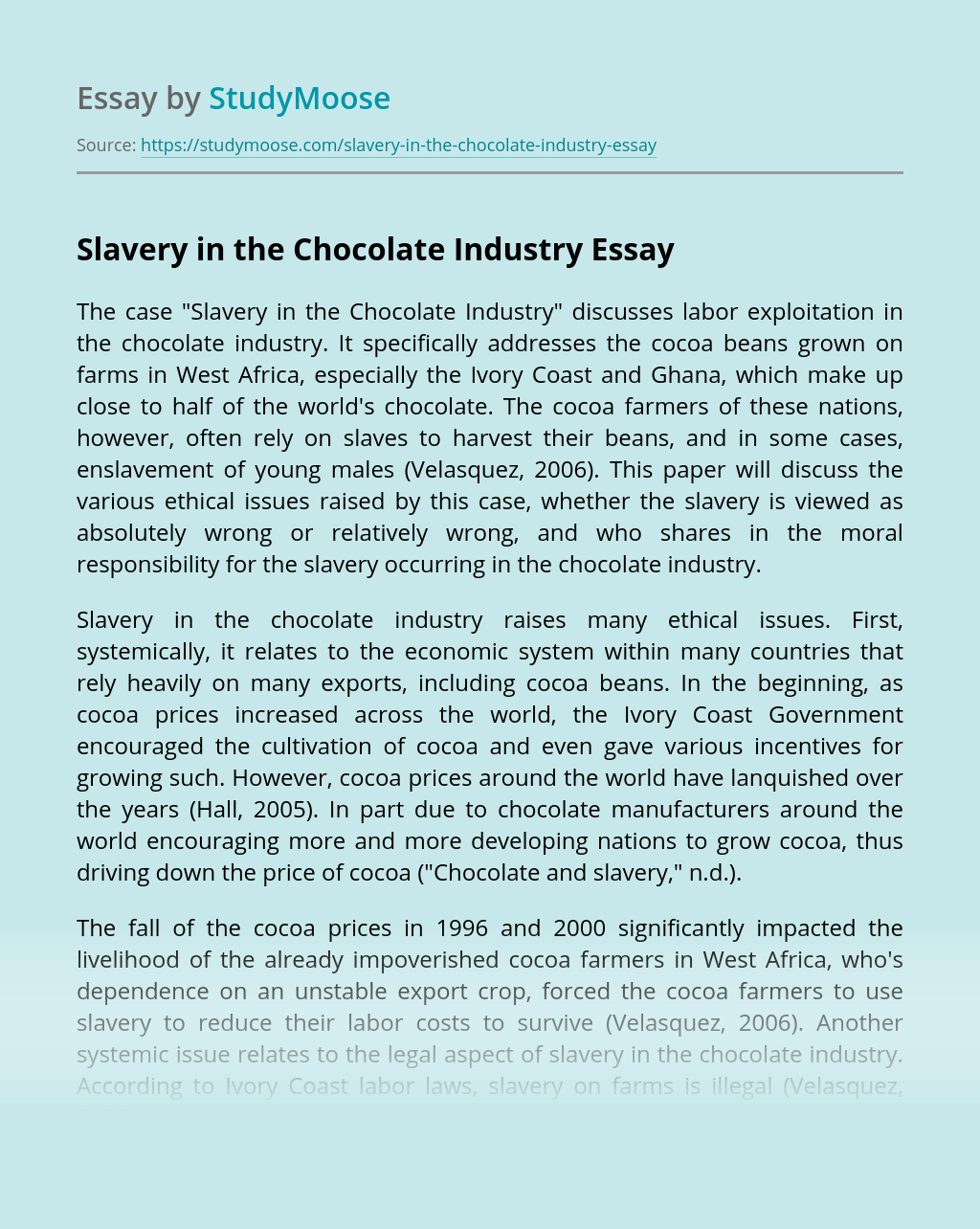 Why the American Civil War Was Necessary

History Term Paper The Civil War, also known as, “The War Between the States”, was needed, made numerous positive actions for the great country to combine again and to integrate slaves as citizens of that country. The South refused to compromise about slavery and they decided to create their own facility, The Confederate States of...

The Importance of Bees

The bee is a critical species to human existence. Honey bees are one of the most important pollinators. They are responsible for $30 billion of crops produced in a year. Albert Einstein allegedly once said, ‘No more bees, no more pollination, no more plants, no more animals, no more man’. A world without bees wouldn’t...

Frederick Douglass How I Learned to Read and Write

During the 1800’s, the organization of slavery was still continuous in the couple of slave states left in America. Slavery was still showing to be unjust and unjust, not enabling for African Americans to be considered equates to. However, some slaves were able to overcome the numerous limitations and limits that slavery required upon them....

The Narrative of the Life of Frederick Douglas An American Slave

Education is power The Narrative of the Life of Frederick Douglass An American Slave was written by Fredrick Douglas and published by The American Anti-Slavery Society in 1845. Fredrick Douglas wrote three successful autobiographies, and was an African American social reformer, public speaker, abolitionist, and writer. After becoming a free slave Douglas published this book...