Slavery In America and The American Civil War

Jefferson did not present his candidacy for a third presidential period, but he helped elect the Democratic-Republican candidate from Virginia, James Madison, as president in 1808. Madison was the 4th president who also presided for two periods, from 1809 to 1817. During these years he had to confront serious problems. The worst of them was the continuous confrontations with Great Britain. Neither English nor French were in disposition to cede to American petitions. The United States wanted to have control over fur trade and other riches.

Don't use plagiarized sources. Get your custom essay on
“ Slavery In America and The American Civil War ”
Get custom paper
NEW! smart matching with writer

Finally, President Madison had to hear many petitions and asked congress to declare war on Great Britain. Congress accepted and the War of 1812 began.

All of population did not support the war. Northeastern merchants and imports opposed the war, for they were afraid that commerce there could be destroyed. Also, Great Britain was in poor conditions. As a result of this, the war ended with no defeats or victories for any of the two countries. In 1814, Great Britain took over Washington D.

C. and burned it. Later, they attacked Baltimore but finally they were expelled. When it was clearly seen that none of the two countries were able to win the war, both decided to put an end to it. Finally, it was given and end to the War of 1812 with the signed Treaty of Gante. Although the treaty of Gante ended the confrontations, it did not resolve the problems provoked by the war.

Some parts of the country strongly opposed the war, especially in New England, where citizens considered that it was ruining their commerce.

The strongest opposition of was for the federalists took place in the reunion or Hartford convection in May of 1814. Here, Federalists attacked the war. Also, they proposed a series of amendments to the constitution, which limited the power of the congress and the president. To many citizens, this action was seen as disloyal. Once the war was over, they severely criticized the Federalists. As a result of this, the Federalists lost the election of 1816 by a great amount. This failure placed an end to the Federalist Party as the nation’s political power. After this they never presented a candidate to the presidency and soon the party had completely faded.

The following years after the war were marked by a feeling of nationalism, a feeling of pride and national unity. The strong loyalty that Americans had felt towards the other states was being replaced for a loyalty toward the whole nation. The fall of the Federalists contributed to this spirit of nationalism. National pride helped Americans to unite to the Democratic-Republican Party. This party had taken many ideas from the Federalists, taken and claimed as theirs. This party reconstructed the army and constructed plans for the creation of roads and canals. Also, high tariffs and establishment of a second National Bank.

Democratic-Republicans with James Monroe as president controlled the Federal Government from 1817 to 1825. There was no other political party that opposed them. Since this political party remained free from arguments, this period was called the “Era of good feelings”. The United States’ economy started to grow rapidly after the War of 1812. Industry and agriculture extended. Commerce prospered. A new swell of people went to the west where they were offered more land. This economic expansion contributed to the growth of the nationalism feeling.

However, this new economic growth also created conflicts. The northeast, the south and the west prospered, but each for different reasons. In the North, economy was based on manufacture. In the West states, between the Appalachian and the Mississippi, economy was based on agriculture. The south was also based on agriculture, but the following years of after the war, there was a rapid growth in the importance of one of the products: cotton. Underneath this surface of the “Era of good feelings” there was a serious problem: regionalism or also known as sectionalism. The habitants of these three great regions started to place their interests over the nation’s interests. This fight between this different economic systems and way of life continued for 40 more years. In the end it brought the Civil War to the United States.

Historians have traditionally labeled the period after the War of 1812 the “Era of good feelings”. Although Nationalism did exist between regions of the United States, this was just a facade. Underneath this so-called nationalism there was a great deal of regionalism also known as sectionalism. Due to this great amount of sectionalism, the different way of living, the beliefs of tariffs and slavery brought the country to divide.

Although the United states did expressed Nationalism in some ways, all this was forgotten when the country stated to divided it self into different sections with different believes. One of the great differences between these sections was tariffs. Hohn Randolph of congress said in 1816, “With my goodwill, sir, no one interest agriculturists bear the whole brunt of the was and taxation, and remain poor, while the others run in the ring of pleasure, and fatten upon them” (Document A). What he tried to say is that the high tariffs were unfair to many people. Other only wanted the best for them with out thinking of the rest of the population.

Also, John C. Calhoun, also from the congress expressed himself in 1817 saying, “Let it not be forgotten, let it be forever kept in mind, that the extent of the republic exposes us to the greatest of calamities – disunion” (Document B). By saying this, he means that the Republic exposes them to the greatest calamity, which is disunion. To this people disunion is one of the worst thing that could happen to the US since during this time it was supposed to be a time were everybody though about the whole nation as one. This time was supposed to be a time were the US government and people thought about doing the right thing thinking only for the benefit of the country, but Calhoun demonstrates that this is only a lie that the US though of to cover this “great calamity”.

The US was divided in three parts, the South, the West and the Northeast. More of the population living in the United States lived in the North (Document E). This was because people could find a better opportunity without high tariffs and with less problems of slavery. Slavery was a big issue during this time. Jefferson wrote to John Randolph in April 22 of 1820: “A geographical line, coinciding with a marked principle, moral and political, once conceived and held upon to the angry passions of men, will never be obliterated; and every new irritation will mark it deeper and deeper” (Document F). In other words, Jefferson admits that the country is separated and being divided by a “geographical line”. This was due to slavery believes, moral and political issues.

As I mention before, slavery was one of the principle facts that led the Nation to divide. Probably, it was the biggest issues that cause the effect of sectionalism between the nation. This not only affected the slaves and slave owners but also the rest of the population. Anna Hayes in South Carolina wrote to her cousin in North Carolina. “I suppose that by this time you are anxious to hear more about the unhappy business” (Document G). She refers to this slavery as “the unhappy business” because it has cause controversy between all. Also, as I mention before due to these great differences the nation became separated. The government had much responsibility of this (Document I).

All in all, even though there did existed nationalism between the Nation, it diminished though out the time and soon it was only a statement used to cover up division. At the end not even nationalism could save the country from sectionalism. As a result the Civil War broke out. This proved that the “Era of Good Feelings” was only a statement used by the United States to cover all the sectionalism that exited in the US.

Slavery In America and The American Civil War. (2016, Jun 27). Retrieved from http://studymoose.com/slavery-in-america-and-the-american-civil-war-essay 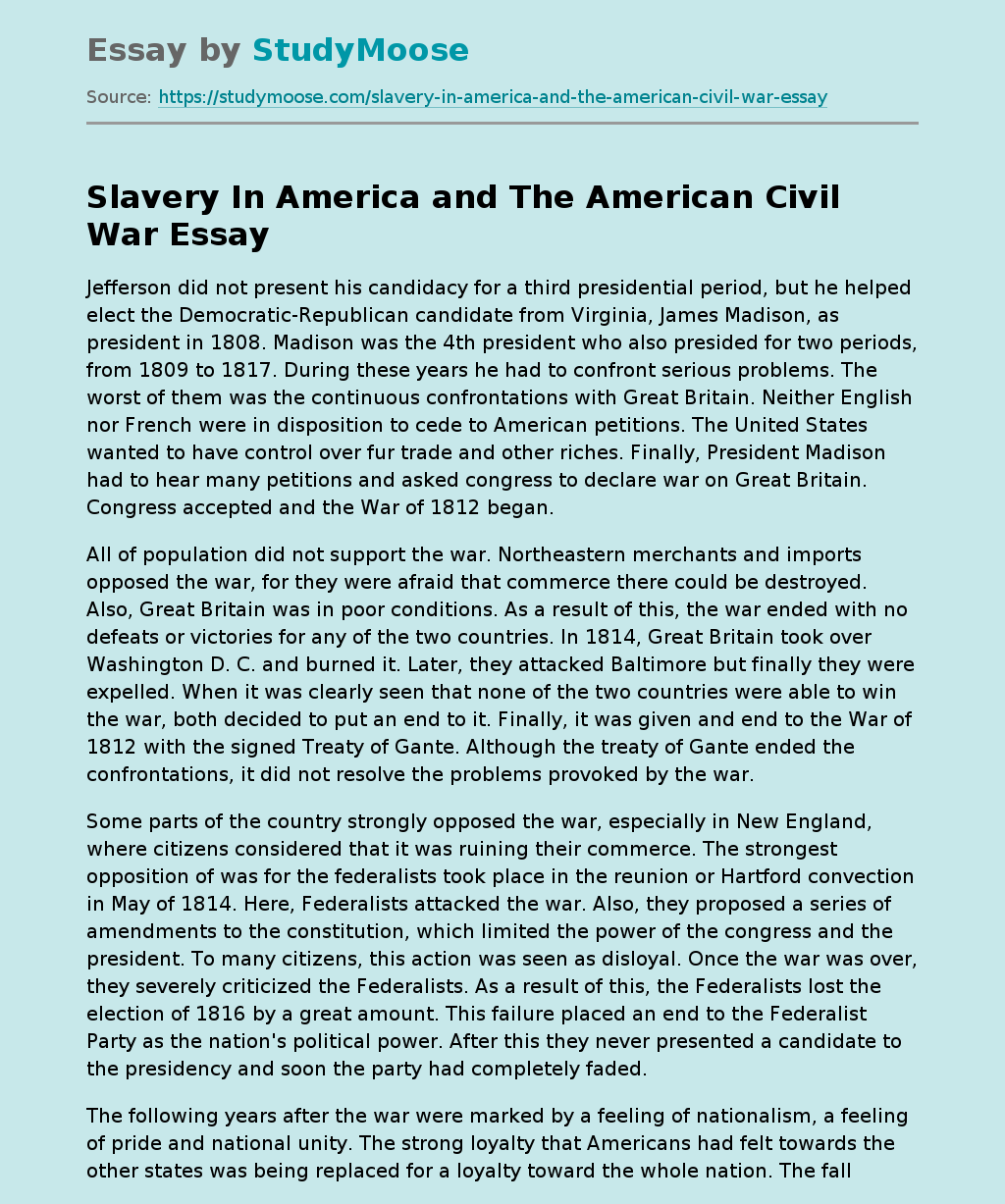