Slavery in the Chocolate Industry: Plight of Children Used for Cocoa Farming

Close to half of the worlds chocolate is made from the highly prized top-quality cocoa beans that are grown on farms in the Ivory Coast and Ghana, a small nation on the western side of Africa. The farmers of these poor nations are notorious, however, for sometimes relying on slaves to harvest their beans, The slaves are boys between 12 and 16 sometimes as young as 9 ~ who are kidnapped from villages in surrounding nations and sold to the cocoa farmers, who use whippings, beatings, and starvation to force the boys to do the hot, difficult work of clearing the fields, harvesting the beans, and drying them in the sun.

Don't use plagiarized sources. Get your custom essay on
“ Slavery in the Chocolate Industry: Plight of Children Used for Cocoa Farming ”
Get custom paper
NEW! smart matching with writer

The boys work from sunrise to sunset and are locked in at night in windowless rooms where they sleep on bare wooden planks. Far from home, unsure of their location, unable to speak the language, isolated in rural areas, and threatened with harsh beatings if they try to get a way, rarely attempt to escape their nightmare situation.

Those who do try are usually caught, severally beaten as an example others, and then locked in solitary confinement for a prolonged period of time.

Every year an unknown number of boys die or are killed on the cocoa farms of the Ivory Coast and Ghana. The plight of the enslaved children was publicized around the world in September 2000 when True Vision, a British television company, took videos of slave boys on several Coast farms and broadcast a documentary in Britain and the United States. An earlier l998 report of the United Nations Children’s Fund had concluded that many ivory Coast farmers used slaves, and the U.

S. State Department, in its Year 2000 Human Rights Report, estimated that in recent years over l5,000 children from the neighboring nations of Benin, Burkina Faso, Mali, and Togo had been sold into slavery in the ivory Coast. Alinight-Ridder newspaper investigation published on Tune 24,2001 called additional attention to the use of the slave boys on Ivory Coast cocoa farms and largely corroborated conditions on the farms as reported by True Vision. The International Labor Organization on June 15 reported that child slavery was “widespread” in Ivory Coast- On .

June l7,l999, a year before True Vision began publicizing the plight of the enslaved children, The International Labor Organization, had adopted a “convention” that committed any country that “ratified” the convention to “immediate and effective measures” to eliminate “all forms of slavery or practices similar to slavery, such as the sale and trafficking of children. ” Eighty-nine countries-including the United States-ratified the convention, although the Ivory Coast did not. Although slavery on farms is illegal in the lvory Coast, the law is rarely enforced.

Open borders, a shortage of enforcement officers, and the willingness of local Officials to accept bribes from members of the slave trade, all contribute to the problem. ln addition, prices for cocoa beans have been declining in global markets since 1996. Between i996 and 2000, prices fell from 67 cents a pound to Sl cents, a decline of almost 25 percent and a decline that was dictated by global forces over which the farmers had no control. Stretched by such low prices, the already impoverished cocoa farmers turned to slavery to try to cut their labor coasts in an attempt to survive the downturn in the global market for cocoa beans.

Chocolate is $l3 billion industry in the United States; in 2000 the U. S. imported a total of 627,000 tons of cocoa. The names of the four largest U. S. chocolate manufacturer’s all of whom use cocoa beans from the ivory Coast in their products- are well known: Hershey Foods Corp. (maker of Hershey’s milk chocolate, Reese’s, and Almnd Joy) Mars, Inc. (maker of M&Ms, Mars, Twix, Dove, and Milky Ways), Nestle USA, (MAKER OF Nestle Crunch, Kit Kat, Baby Ruth, and Butterfingers), and Kraft Foods (which uses chocolate in its baking and breakfast products). Less well known, but a key part of the industry, are the names of Archer Daniels Midland Co. Barry Callebaut, and Cargill inc. , all of whom serve as middlemen who grind and process cocoa beans they acquire from the lvory Coast and sell the product to manufacturers. That many farmers in the Ivory Coast use slave boys to farm their cocoa beans was already known to American chocolate makers when media reports first publicized the issue. In 2001, the chocolate Manufacturers Association, a trade group of American chocolate manufacturers (whose members include Hershey, Mars, Nestle, and others), admitted to newspapers that they were aware of the use of slave boys on Ivory Coast cocoa farms. Read why estle kills babies

Pressured by various antislavery groups, the chocolate Manufacturers Association stated on June 22 that it “condemned” “these practices” and agreed to fund a “study” of the situation. in the spotlight of continuing media attention, the Chocolate Manufacturers Association, on September l9,200l, signed a plan entitled “Protocol for the growing and processing of Cocoa Beans and Their Derivative Products in Manner that Complies with ILO Convention 182 Concerning the Prohibition and Immediate Action for the Elimination of the worse Forms of Child Labor. The members of the Chocolate Manufacturers Association agreed they should “investigate” conditions on the cocoa farms and should establish an “international foundation” that could “oversee and sustain efforts” to eliminate child slavery on cocoa farms.

ln July 2002, the first survey sponsored by the Chocolate Manufacturers Association concluded that some 200,000 children- not all of them slaves-were working in hazardous conditions on cocoa farms. ln May 2002, after substantial media attention and under pressure from U. S. Senator Tom Harkin and U. S. Representative Eliot Engel, the members of the Chocolate Manufacturers Association and the World Cocoa Foundation, together with several human rights groups and the lvory Coast government, signed a “Memorandum of Co- operation” in which they agreed to work toward ending the use of child slaves in the Ivory Coast. The members of the chocolate Manufacturers Association agreed to fund training programs for cocoa bean farmers that would educate farmers about growing techniques while explaining the importance of avoiding the use of slave labor.

They also agreed to establish a system of “certification” that would verify and certify that the beans used by members of the Chocolate Manufacturers Association were not harvested by slave labor. 1- Overview of the Assignment. (10 Marks) 2- Critically discuss the systemic, corporate, and individual ethical issues raised by this case. V (25 Marks) 3- Identity and critically analyse the moral responsibility for the slavery occurring in the chocolate industry Whether, African farmers, African governments, American chocolate companies like Hershey, Mars, or Distributors like Archer Daniels Midland Co. Barry Callebaut or Consumers like you and l who know about the situation but continue to purchase tainted chocolate. (25 Marks) 4- Critically evaluate and analyse the ethical and moral issues about the child slavery in different situations by giving an examples from different part of the world. (25 Marks) 5- Conclusion and Findings. (10 Marks) 6- Referencing and bibliography (minimum 5) (5 Marks) Good Luck

Slavery in the Chocolate Industry: Plight of Children Used for Cocoa Farming. (2020, Jun 02). Retrieved from https://studymoose.com/slavery-chocolate-industry-plight-children-used-cocoa-farming-new-essay 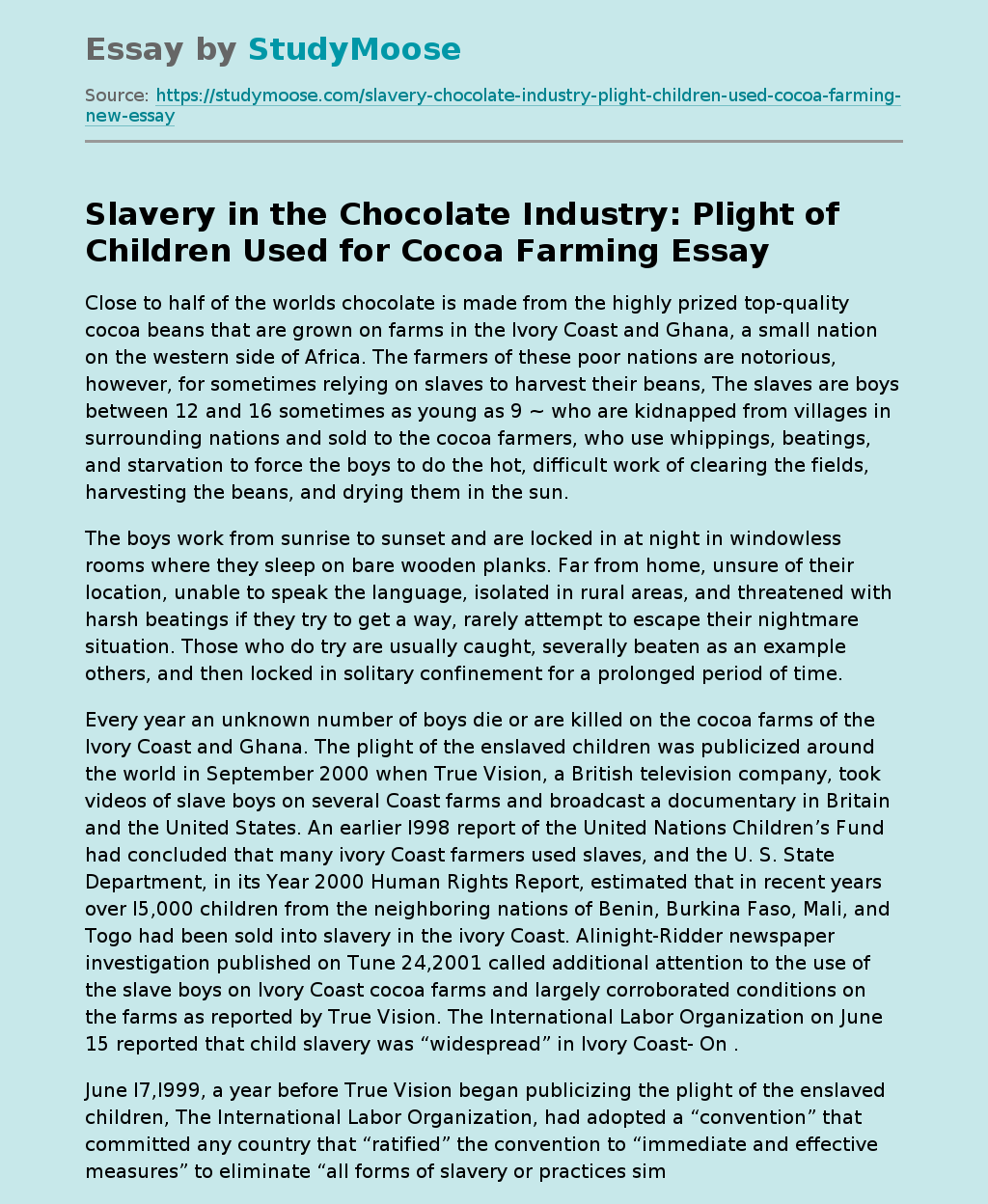