Slaughterhouse-five is the story of Billy Pilgrim, a World War Two prisoner who suffers the bombing of Dresden. Billy is later on abducted by aliens and taken on a time travel where he sees his own past, present, and future. The story leads you on a wild journey in which Billy becomes unstuck in time. He travels through different periods of his life, unable to control which period he will land in next.

Don't use plagiarized sources. Get your custom essay on
“ Slaughterhouse Five The Story ”
Get custom paper
NEW! smart matching with writer

It’s a disorder that develops in some people who have experienced a shocking, scary, or dangerous event. PTSD was first brought to public attention in relation to war veterans but there can be many other traumatic experiences that cause the disorder as well. Most people with PTSD repeatedly relive the trauma in their thoughts during the day and in nightmares when they sleep. People with the disorder often have flashbacks that may consist of images, sounds, smells, or feelings, and are often triggered by ordinary occurrences.

Slaughterhouse-five has many moments that relate to the symptoms of PTSD. Billy pilgrim has nightmares almost every time he sleeps. When Billy fell asleep in the boxcar in Germany that was taking him to a POW camp, the other prisoners didn’t want to sleep next to him due to his whimpering and kicking. This shows how bad his nightmares can be.

One of the most prominent symptoms of PTSD is the reliving of horrific past experiences. This symptom becomes literal in Billy’s case during the time traveling.

“He came to in what he thought might be a building on Tralfamadore. It was shrilly lit and lined with white tiles. It was on earth, though. It was a delousing station through which all new prisoners had to pass. Billy did as he was told, took off his clothes. That was the first thing they told him to do on Tralfamadore, too” (83). This experience for Billy showed you even more as to why he has PTSD. This was when he started having his flashbacks and worst nightmares.

Kurt Vonnegut implies in the novel that Billy does indeed have PTSD. “Billy pilgrim has come unstuck in time. Billy has gone to sleep a senile widower and awakened on his wedding day” (Vonnegut 23) Vonnegut uses five negative examples to illustrate the horrible and devastating examples of war. In these examples it talks more about Billy Pilgrim and his PTSD.

Post traumatic stress disorder is a disorder that happens to the people that have been through the most. Unfortunately, Billy Pilgrim is a result of that. Billy had a horrific past and that caused him to have many flashbacks and nightmares. 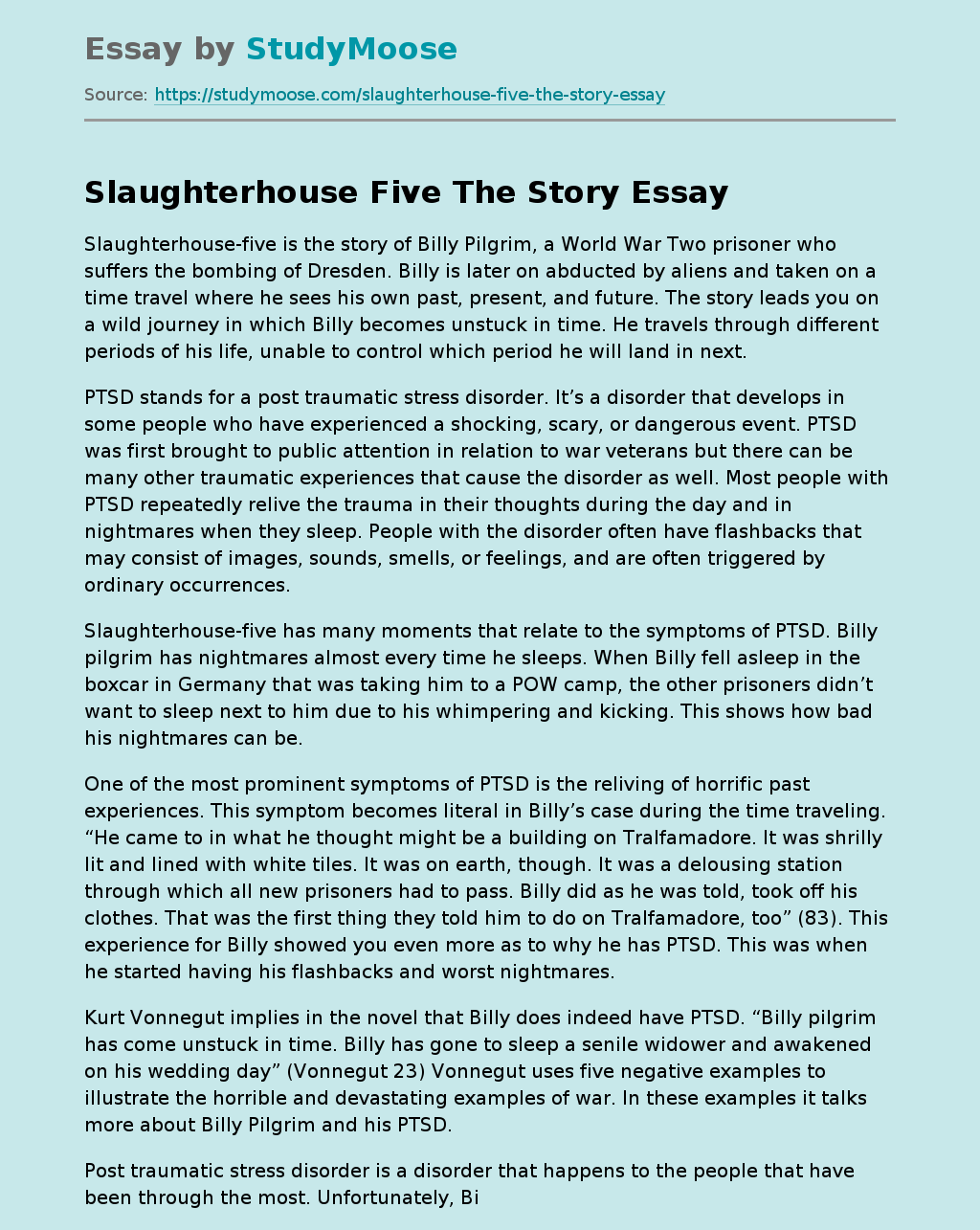