Today deer hunting is one of the most popular types of hunting in South Georgia. Although there are several ways to hunt deer, the two most frequently used are rifle hunting and bow hunting. Both are a great way to spend the day hunting, but there are a few differences between the styles. The cost of rifle hunting is significantly higher due to the equipment needed. Some rifles can cost as much as two thousand dollars. With some additions to the rifle, like scopes costing just as much as the rifle itself; some rifle packages can range over five thousand dollars.

Don't use plagiarized sources. Get your custom essay on
“ Skills and Weapons Required During Deer Hunting ”
Get custom paper
NEW! smart matching with writer

Ammunition is also a high cost in rifle hunting. Boxes of ammunition can range up to twenty five dollars and can not be reused.

The cost of bow hunting is lower than rifle hunting due to the low cost of the equipment. Most bows range between five hundred to a thousand dollars. The arrows for the bow can be sometimes be more costly than ammunition if a high quality arrow is purchased.

However unlike the rifle ammunition, the arrows can be reused many times before they start to lose their effectiveness.

The rifle hunting season does not start right when deer season actually begins. The deer are still abundant, but you are not able to hunt the first few weeks of deer season. The woods are also crowded with hunters during rifle season since more hunters rifle hunt than bow hunt.

This is a great time of the season to really enjoy the hunt without having to worry about running into another hunter. Since the big deer seem to be more prevalent during the first few weeks of the season; you may have the chance to see that big buck that you always wanted to see.

Using a rife does increase your accuracy and range. With the proper scope, the rifle can have up to five times the range of a bow. However, wind speed down range can affect the path of the bullet. It can sometimes be hard to discern what the wind is doing three hundred yards away from you. However since the rifle is so powerful, your aim does not have to be perfect to kill the deer.

Using a bow means decreased accuracy and range. Bows do not typically come with scopes, but with open sights. This means that you rely on your eyes to line up the cross hairs versus a scope doing it for you. Wind direction and speed has an impact on arrows also. However since the range is limited, you can judge by the wind around you. This means it is easier to adjust for the wind shifting. Since a bow is less powerful the accuracy of the shot has to be near perfect to make a kill.

Using a rifle during hunting also requires less skill as a hunter. Since the accuracy is so high at long ranges, stealth is not as crucial. A small understanding of the deer’s natural habits is needed. Since you have distance on your side you don’t have to be concerned so much over whether or not the deer can smell you or not. Rifle hunting is also considered one of the easier types of deer hunting and is used a lot by beginners.

Using a bow however requires a lot more skill as a hunter. Since the accuracy and range of the bow is limited, you find you have to be extremely close to the deer to make a shot. Camouflage and stealth are critical elements in achieving this. You also have to have a fair amount of knowledge about the deer itself. Since the deer can smell you at this range you have to understand how to avoid the deer getting your scent. Bow hunting is considered a little harder and is used by seasoned hunters.

Rifle hunting and bow hunting both will make your day more enjoyable no matter which one you choose. Rifle hunting will give you the assurance of knowing you can kill your first deer. However bow hunting will give you the thrill of the hunt and make you long to come back the next day to get that one you missed. After all, that’s why they call it hunting.

Skills and Weapons Required During Deer Hunting. (2017, May 18). Retrieved from https://studymoose.com/skills-and-weapons-required-during-deer-hunting-essay 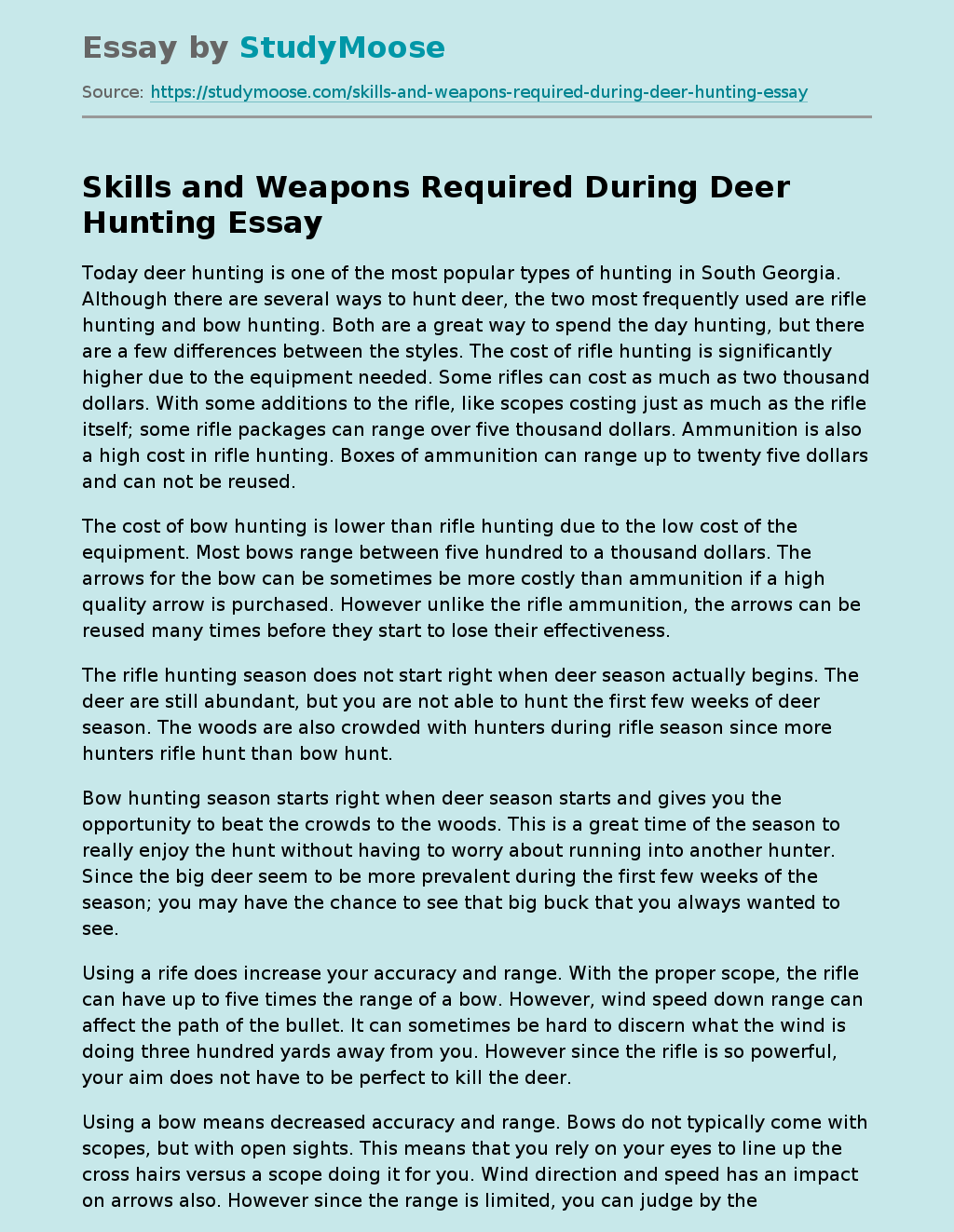