The Madness of King George III

In the beginning of the film, the historical aspect of the movie would seem to be accurate and more precise with that actual event that occurred in the text. The movie portrays King George III as someone who doesn’t fully understand the position he was in as king while others around him were more concerned about his position alone and not his state of mind at first. The characters in the movie were portrayed perfectly in my point of view due to the rivalry between King George III and his eldest son Prince of Wales.

Don't use plagiarized sources. Get your custom essay on
“ Film Analysis : The Madness of King George III ”
Get custom paper
NEW! smart matching with writer

While reading more about their history, it seemed that George IV wanted to do everything he could see seize power over his father and claim the throne for own personal gains. The attire and clothing in the movie were something that I’d imagine that time period would wear. Everything they wore were only fancy clothing with a lot of jewelry due to the king having a lot of get-togethers in the palace.

I would say the movie enhanced my understanding during that time period because the film itself made it very clear that during that time period whatever the king wanted to do or needed to happen then it was taken care of. Another example would be how the people close to King George III not only cared for themselves, but a selective few only cared for the king’s safety and wellbeing. I believe that not everyone fully understood the issues and problems that King Goerge III had to face and overcome not only physically but mentally as well because during that time suffering from genetic blood disorder known as porphyria.

During that time there were no real medicine for it nor anyway to really understand how it would affect one’s mind to that extent. I think that Nicholas Hytner main motivation for this film was to stress the emphasis on how that time period would handle anything involving any kind of disorder regardless of position and the drastic measures they would take as well. I do believe that the director was sending a message while making this film which was regardless of your status in life, there’s always something going on in someone’s mind or thoughts so you shouldn’t be afraid to deny and seek help like King George III did at first because not everyone can understand your problem unless you reach out a speak what’s in your mind. Since I’ve had personal experience dealing with mental health issues in the past years, the message I took from this was more of an eye opener to not deny my problems but to actually reach out to others so that they could better understand my situation to help and overcome so that way I’m not holding myself back.

After watching the film, I noticed that there were a few people that were only concerned about their wellbeing on their status while the king himself is being treated as a mental patient, but what caught my attention was how the disorder was dealt in the manner. The disorder the king was facing was something rare during that time and is still rare today known as porphyria which is basically built up chemicals in the human body which is also a rare compound to be found. The only way to contract the disorder is from inheriting gene also known as gene mutation form either parents. Since the disorder is completely rare even now I could only suspect that the doctors knew nothing on how to cure such a problem unless using unorthodox methods. The personal doctors that were attending the king were not there for the kings’interest but for themselves as well as Prince of Wales personal motive to overthrow his father to take the throne promising those who aid him to keep their positions when the king was dethroned. Later in the film although King George III was mentally unstable, he was no fool to see what was happening behind his back while people would attend his concerts and wish him well, while also scheming to make him have an outburst around a crowd to ensure those around him that he is unfit to be leading and should step down. “You wish me death you plump little.cuckoo(King George III). It would seem the people under Prince of Wales had but one motive which was to ensure they had a spot working directly for Prince of Wales and doing as they please, but the prince himself had another motive besides being spiteful towards his father. Prince of Wales main objective was to marry the women who he wanted but was denied by his father due to him not recognizing their marriage as legitimate.

After the outbreak at the concert, Prince George achieved his goal momentary and made the choice that the king is unfit to his duties. “I fear the time is coming, Mr.Pitt, when it is a burden we shall be forced to share” (Prince George IV). Around this time the disorder became known to everyone knowing what the king himself had done and questions asking if he’s fit to rule England became publicly known. King George III condition around this time becomes worse due to the porphyria and it seems the king is somewhat aware of his current situation but doesn’t fully understand it himself. He mentioned he was aware he was “talking” or rambling on in order to be able to keep up with his thoughts I have to talk in order to keep up with my thoughts” (King George III). Based on the film, the king showed normal signs when we talk about porphyria which included hysteria, organic disorders, and agitation. For example, Acute porphyria affects the chemical compound in the human body which resulted in the kings urine being an unusual color or the how the slightest sign or disrespect or concern would agitate the king into a frenzy outburst. Another example of acute porphyria would be when King George III was being escorted outside by his guards for a walk and Mr. Pitt had seen the outcome of the “treatment” when the king was constipated and had severe abdominal pains randomly. Everything the King has done until now has confirmed that everything he was exposed to was all due to porphyria. The mental disorder became something that not even the queen was able to stop form happening and as a result, King George III was tricked into a room where he was being held against his will.

The people and servants thought the king had lost his mind and gone made, but the king himself was far from it because even after suffering through his rare illness, he was very literate whenever he spoke of sudden change within him “When felons were induced to talk, they were shown first the instruments of their torture. The king is shown his to induce him not to talk” (King George III). Although porphyria was considered an illness during that time, its’ also known that not everything that happens to them are deluded in their mind, but there are times to which they fear the worst might happen and therefore act upon that feeling to ensure it never happens. At this point the only people who genuinely cared for the kings’ wellbeing were only those who truly knew and understood the king, but everyone else did not care for that matter. It’s said that there isn’t a cure for porphyria and it can be treated temporarily, and the most common way is to heal on their own accord meaning that the process shouldn’t be rushed but find soothing means to keep the mind at bay

Everything that King Goerge III went through such as random outburst, bipolar behavioral changes, anxiety, etc. were all positive signs of porphyria or acute porphyria and for us to fully understand how King George III dealt with the illness all his life actually makes since to why the guards would randomly find him at someone’s’ farm because like anyone, their minds or self-conscious naturally find things to keep your mind from wondering to the point where your thoughts wouldn’t collapse on itself. 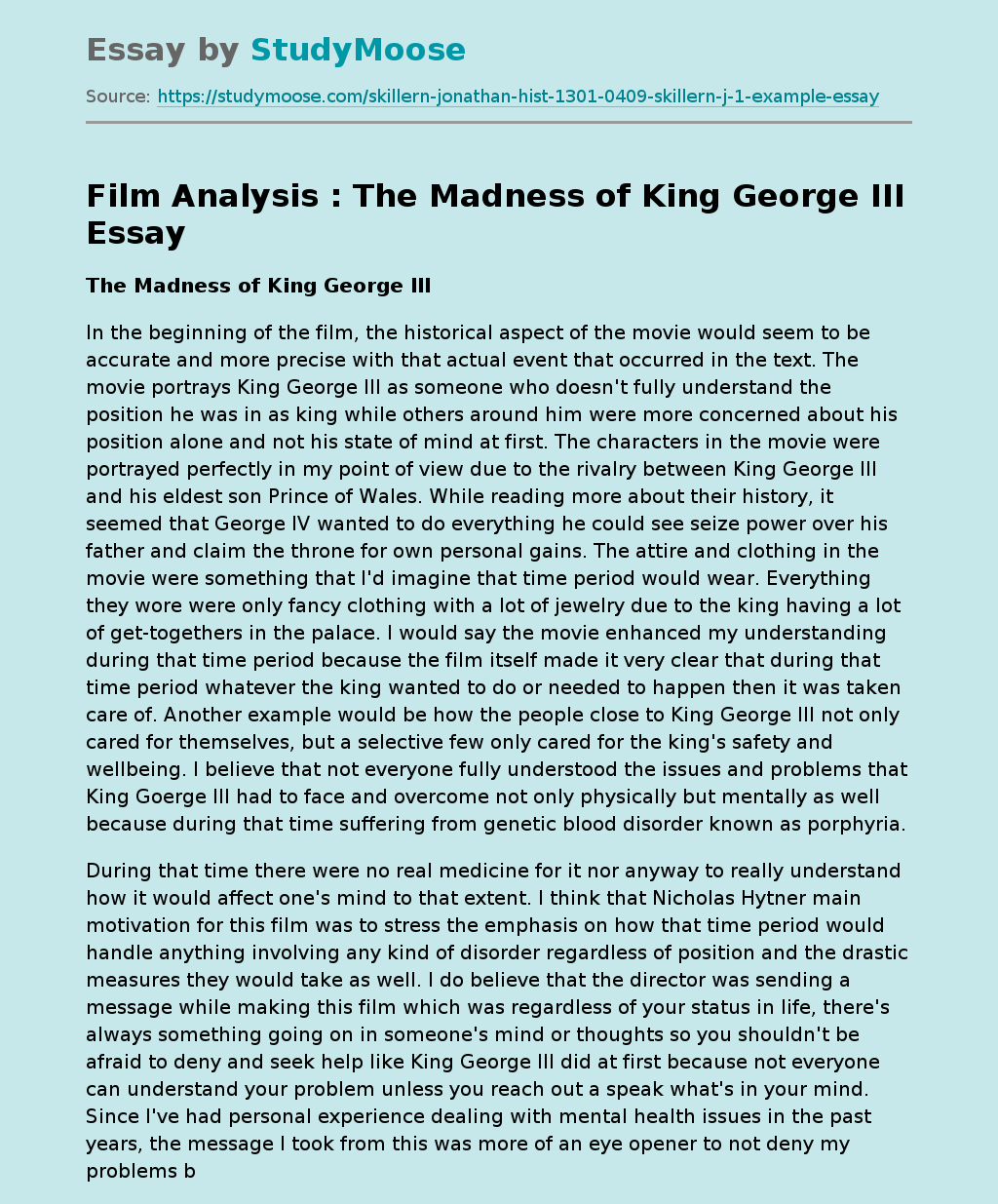