Ecosystem-based management (EBM) is a great tool to protect not only the environment, but to do it in a way that is not detrimental to humans or the economy. Traditional environmental movements have for the most part been a failure since they advanced the environment at the expense of the economy and of humans. However, we cannot continue in this same manner or else we will live in a world that is too polluted to live in. One of the greatest minds, Stephen Hawking stated, “We are in danger of destroying ourselves by our greed and stupidity.

Don't use plagiarized sources.
Get Your Custom Essay on Ecosystem-Based Management Just from $13,9/Page

We cannot remain looking inwards at ourselves on a small and increasingly polluted and overcrowded planet”. EBM is an approach that helps protect the environment but also takes into consideration both the economy and social aspects. This paper will provide an analysis of EBM by first giving an explanation of what it is, and then provide examples of adopting EBM, and finally highlight some barriers to EBM.

The six aspects of EBM

We need to incorporate all of three of these aspects in order to come up with solutions that satisfy all stakeholders. “Many approaches to sustainability oriented assessments — at the project as well as strategic level — have begun by addressing the social, economic and ecological considerations separately and have then struggled with how to integrate the separate ﬁndings” (Gibson, 2006). The foundation of the different studies should be the integration of the three aspects rather than integrating after the fact.

Boundaries. The second aspect of EBM is the consideration of ecological boundaries rather than just political boundaries (“About EBM”, 2010). An ecological boundary can be thought of as a heterogeneous area that has something that defines it. Such as the boundary of a forest would be the area the forest covers. Cadenasso, Pickett, Weathers, and Jones (2003) informed, “Boundaries are important components of spatially heterogeneous areas. Boundaries are the zones of contact that arise whenever these areas are partitioned into patches”. Contrast this to political boundaries which would be described as the boundaries of different countries or even states and cities within a country.

Interest based negotiations. Engaging all interest holders in a collaborative process to define problems and find solutions (“About EBM”, 2010). The idea is to come up with win-win solutions to negotiations and a great way to do this is by using interest based negotiations. Interest based negations is a four step process. “(1) Identifying issues and interests critical to each party, (2) gathering and sharing information needed to analyze problems, (3) generating options for resolution, and (4) choosing options that offer the highest mutual gains for the parties” (McKersie, Sharpe, Kochan, Eaton, Strauss, and Morgenstern, 2008, p. 67). The key step here is four, mutual gains for all parties, which produces the win-win solution.

Sustainability. The last aspect of EBM is the sustainability of both human and ecological systems (“About EBM”, 2010). Sustainability is in many instances used to describe ecological systems, but many traditional environmental efforts have been ineffective since they were at the expense of human systems. Thus they pitted one against the other. Instead if the well-being of both can be maintained then a much better win-win solution can be achieved. There cannot be unregulated industry which is great for the economy but bad for the environment. As well if there is a great push to save the environment at the expense of the economy then it would be great for the planet but leave humanity poorer. Solutions must be found that save the environment and not harm the economy. Adopting EBM

Great Barrier Reef. Australia has adopted EBM to protect its coral reefs. As well it uses EBM to regulate the fish populations. It has gone further than any other country in enshrining EBM principles into law (McShane, Broadhurst, and Williams, 2007). The Great Barrier Reef in Australia is one of the great natural heritage sights not just in Australia but in the world. It is taking the right approach in protecting this great natural wonder. Olsson, Folke, and Hughes, (2008) reported, “The transformation process was induced by increased pressure on the Great Barrier Reef from terrestrial runoff, over-harvesting, and global warming that triggered a new sense of urgency to address these challenges”. It is unfortunate that change did not occur until the danger to the reef reached a critical status, but the Australian government moved fast and the reef is in much better shape now.

Arctic. Canada and The United States have joined forces in adopting EBM together with their joint responsibility of protecting the Arctic. Once again this example has to do with a marine system the Arctic Ocean. “The ecosystem approach has also been developed nationally, with EBM initiatives undertaken as part of the national ocean policy frameworks and actions plans of the United States and Canada” (Siron, Sherman, Skjoldal, and Hiltz, 2008). The Arctic is one of the few places on Earth that is relatively untouched by humans. This joint effort should help keep it that way; however, there are other countries in the arctic and this effort should be expanded to include all arctic nations. Great Bear Rainforest.

EBM has mainly been employed in marine ecosystems, but it is being employed more in other ecosystems as well. It is a great management approach whenever there is human interaction with the environment. An example of this is the Great Bear Rainforest in BC, “Ecosystem-based management is the management system being applied to 6.4 million hectares of the coast of British Columbia, Canada, an area referred to as the Great Bear Rainforest (Price, Roburn, Mackinnon, 2008)”. They got all stakeholders together to come up with solutions to protect this natural habitat including aboriginal groups. They found an integrative solution to protect this natural habitat. What are the barriers to adopting EBM

Grizzly Bears. The province of Alberta along with Canada and local mining companies tried to adopt EBM to protect the local Grizzly Bear population. However, it had to be stopped since it could not be used to protect them adequately. Clark, and Slocombe (2011) stated, “The regional ecosystem approach for conserving grizzlies in the Foothills Model Forest originated in federal and provincial legislative processes but proved vulnerable to shifting goals and containment by a single powerful participant”. The problem was that they were trying to contain the Grizzly Bears to a certain area, but Grizzly Bears are hard to contain and their population has no natural boundaries. Without accounting for boundaries, one of the six key aspects of EBM, it is hard to implement it. Failure to integrate. One of the problems with EBM is as mentioned already is the issue with boundaries.

If too much emphasis is placed on establishing different boundaries then integrating these boundaries into a larger system may be difficult. Jõgiste, Moser, and Mandre (2005) found, “Although ecosystem-based management respects the ecology of individual ecosystem components or values, it may focus on individual objectives (Kimmins, 2004) rather than producing an integrated and balanced system”. If integration, one of the six key aspects of EBM, is better managed to include integration of different boundaries then it might solve this problem. It should not just be limited to integration of social, economic and ecological goals. It should be the integration of boundaries as well so that experiments are not just conducted within specific boundaries and then combined together. Instead experiments should consider how boundaries interact with each other. Is EBM always the most appropriate approach

Planetary boundaries. Another well adopted model of sustainability is the planetary boundaries model. The model is based on nine boundaries that define critical aspects of the Earth. Three of these aspects, nitrogen flow, biodiversity loss, and climate change, have already passed their boundaries. “The concept of Planetary Boundaries (PB) is a provocative extension of social-ecological systems thinking, an approach that acknowledges that one issue alone – whether it is climate change, ocean acidiﬁcation, or biodiversity loss – cannot be managed in isolation” (Whiteman, Walker, and Perego, 2013). It is about researching the nine aspects and looking at how these aspects interact with each other. From this research a larger model is created.

This paper has shown that the ecosystem-based management approach to environmental stewardship is a great approach to take that helps satisfy the needs of the many stakeholders. There have been some great examples of successes of adopting the EBM such as The Great Barrier Reef, The Arctic and The Great Bear Forest. There have also been failures such as tracking of the Grizzly Bears in Alberta. The cause of this was there was no way to establish a proper environmental boundary for the Grizzly Bear population. Another problem mentioned about ecological boundaries is the haphazard manner they are created by scientist. Many times they are created to suit the needs of the scientist rather than reflect true changes in nature. A way around this problem is to have better created boundaries, and to have experiments be more robust so they encompass not only the individual boundaries but the interaction of the many different boundaries. In conclusion EBM is a great tool but it is not without its problems. 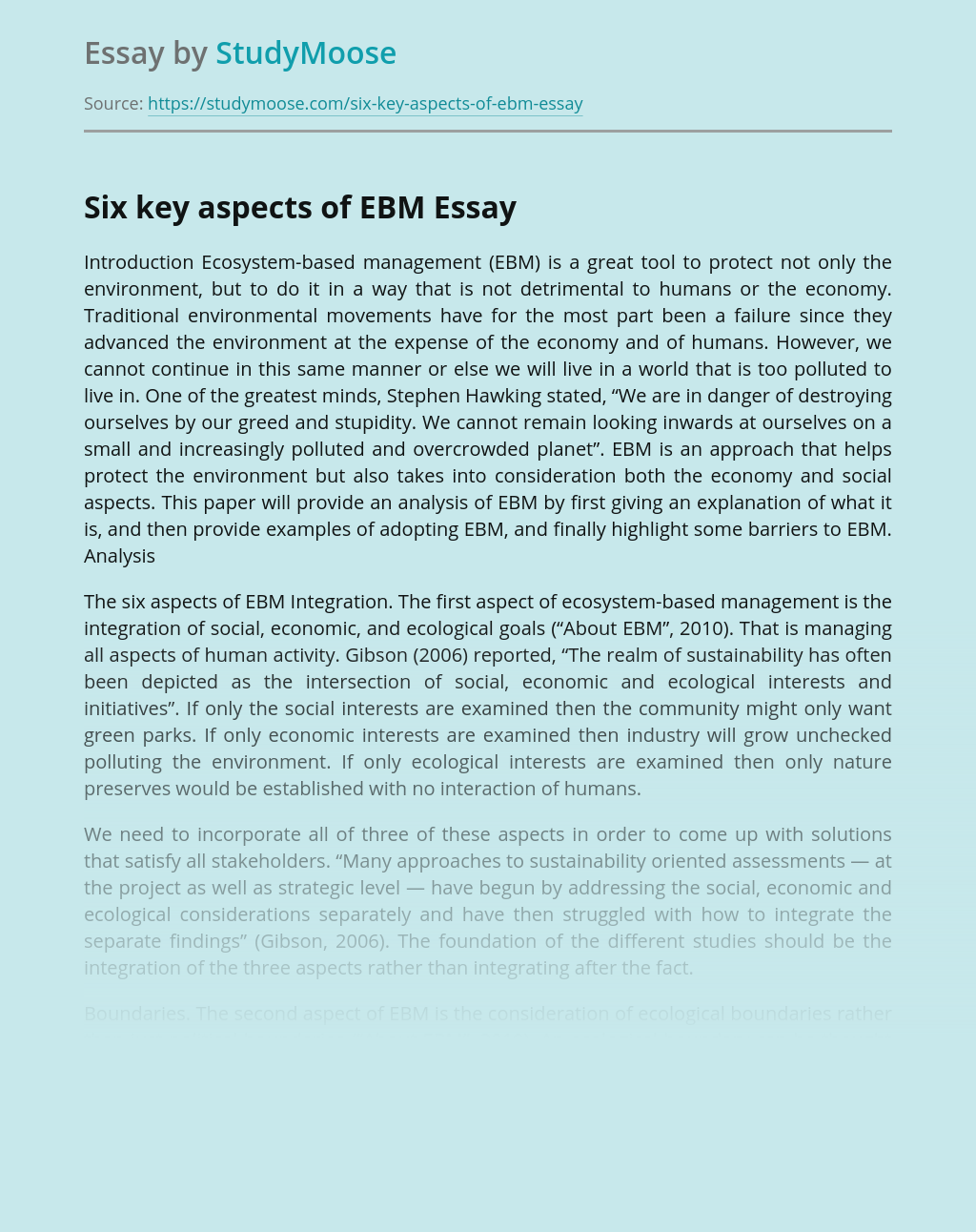 My name is Zuo Jing, the Associate Professor from the School of Communication, Yunnan Normal University. It is a tremendous pleasure to write on behalf of Zhao Hanying, one of my favourite students to support her application to your university. I came to acquaintance with Hanying in the Creativity and Planning of Cultural Industry course....

QUESTION 1 Digital camera market has enjoyed tremendous growth since it was introduced in the photographic industry. Starting in 1998, price has been falling rapidly. In addition, the development of CMOS allowed digital camera to not only capture professional market, but also enter consumer market. It was estimated that in 2006 forecast would peak with...

1.1Introduction Anxiety is a general term for several disorders that cause nervousness, fear, apprehension, and worrying. These disorders affect how we feel and behave, and they can manifest real physical symptoms. Mild anxiety is vague and unsettling, while severe anxiety can be extremely debilitating, having a serious impact on daily life. People often experience a...

Throughout “An American Childhood”, Dillard shares with us her childhood experiences with her dear mother. Dillard’s admiration for her mother is clearly visible through the way she explains in depth all of the memorable situations and events. Dillard explains how intelligent her mother was and how she always played mind games with her and her...

In Greek mythology, there were 12 Olympians, gods and goddesses, who lived on Mount Olympus which is the highest mountain in Greece. The leader of the Olympian gods was Zeus. The gods were born and grew just like human beings, some of them even married, however they were un-aging and death never came to them....