Situational Knowledge: the Science Question in Feminism of Partial Perspective

Harraway’s article unites a vision of radical epistemology with some of the well-established Feminist perspectives on scientific or rational objectivity. While refuting the claim of objectivity made by Western science and the concepts of objectivity which are regularly ascribed to what she calls an “invisible conspiracy of masculine scientists and philosophers replete with grants and laboratories” (Harraway, 1988, p.

575); while such an assertion may seem a bit coy, Harraway’s intention in the article is to present some profoundly radical ideas regarding the nature of epistemology while all the while attempting to couch her language and concepts in a form which will allow for relatively easy understanding by academic and non-academic readers.

Don't use plagiarized sources.
Get Your Custom Essay on Situational Knowledge: the Science Question in Feminism of Partial Perspective Just from $13,9/Page

One of the most significant aspects of Harraway’s ideas is her conclusion that so-called objective knowledge is, in fact, a myth and the myth of objective knowledge is a key tool in amassing power by individuals and groups as well as intellectual disciplines such as science and philosophy.

By combining her ideas on the nature of power with post-structuralist and deconstructionist philosophy, Harraway explores the nature not only of language as it relates to concepts of objective knowledge, but of sensory perception as well.

Harraway notes that the idea of objectivity has been substituted for subjective belief almost entirely and that true objective knowledge is not based in specific individual evidence but by mutual evidences: “Objectivity is not about disengagement but about mutual and unusually unequal structuring, about taking risks in a wold where “we” are permanently mortal, that is, not in “final” control” (Harraway, 1998, p.

596) which forms the key of Harraway’s thesis: that “objective” knowledge by its own nature cannot be claimed by any specific party with assurance. Two questions which arise from reading the article are: 1) What are the achievements of science and philosophy which have emerged from the admittedly flawed and masculine vision of objective knowledge? and 2) How could some of Harraway’s more demanding intellectual ideas be presented in such a way as to stimulate and educate “ordinary” people?

What would such a radical shift in everyday vision mean to the world? Is Harraway’s “epistemological relativity” analogous in any way to recent concepts in quantum physics and modern science?

Harraway, Donna. “Situational Knowledge: the Science Question in Feminism and the Privilege of Partial Perspective. ” Feminist Studies, Vol 14, No. 3, pp. 575-599. 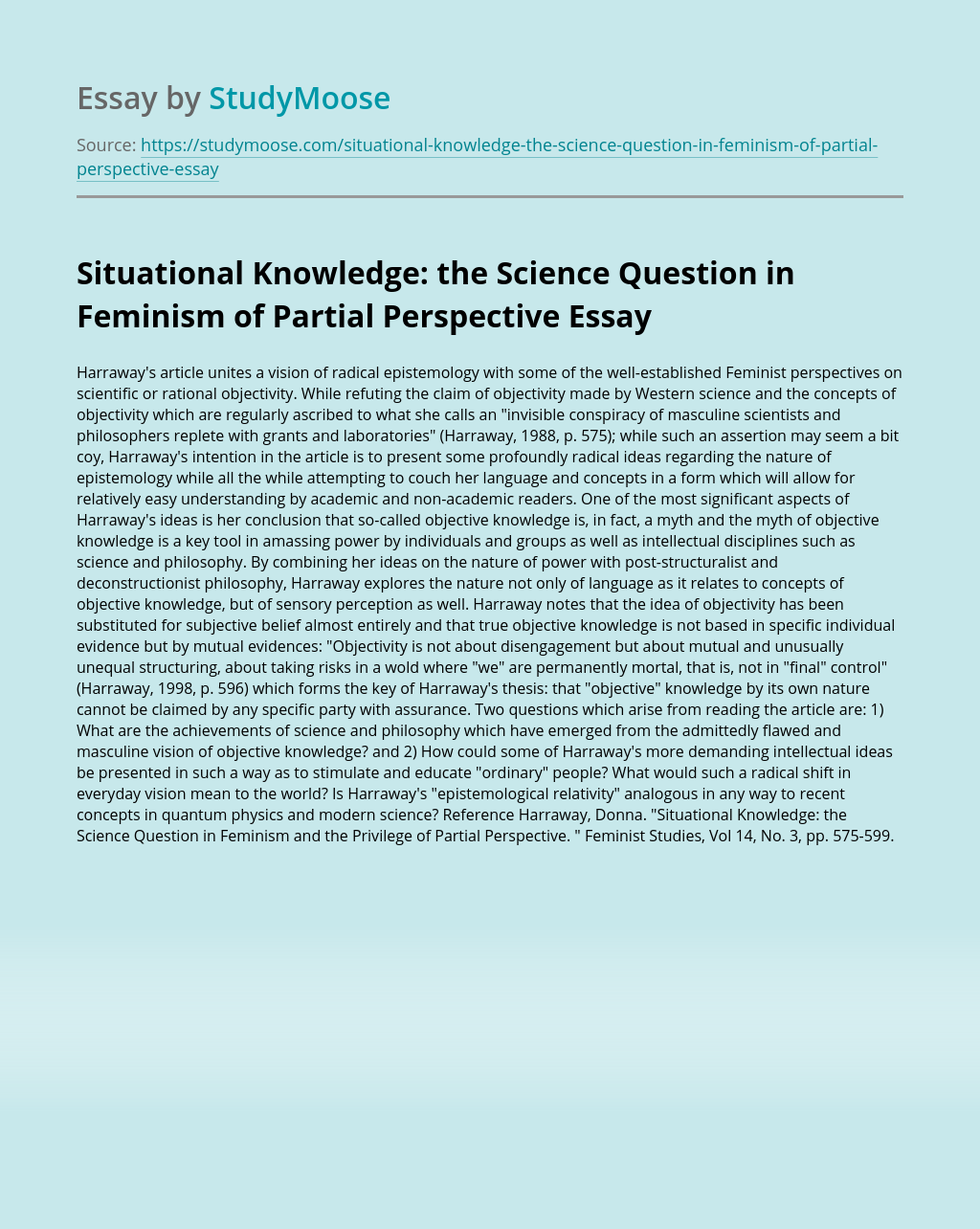 Strategic planning can be defined as the process of developing and maintaining consistency between the organisational objectives and resources and its changing opportunities. Hence strategic planning aims to define and document an approach to doing business that leads to satisfactory profits and growth. This approach or strategy sets the general direction for the use and...

Edgar Allan Poe’s story entitled “The Tell-Tale Heart” is a depiction of anxiety, pride, and revenge that lies within the main character. He did not understand the real reason why the old man used to scream at night. It was just that he is terribly irritated with the loud voice that often came to his...

The question of God is a perennial subject of debate in the history of philosophical scholarship and can be located in nearly all the epochs of philosophy. The subject however occupies a central space in the medieval epoch that was characterized by religious thinkers. The debate is largely between two schools of thought. There are...

View sample
Pros and Cons of Computers in Kindergarten