Sister Callista Roy during her career has held different positions in healthcare. She worked as a staff nurse, held administrative positions, and as faculty of St.

Sister Callista Roy began developing her Adaptation Model in 1964, based on the encouragement of Dorothy Johnson (Ross, 1990).

Dorothy Johnson challenged Roy to develop a conceptual model for practicing nursing (Ross, 1990). Roy’s Model is influenced greatly by Harry Helson, physiologic psychiatrist (Roy, 1990). The Roy Adaptation Model was first published in 1970 (Phillips, 2010). Since that time, the Model has been continuously refined by Roy (Phillips, 2010).

The Roy Adaptation Model is based on the person being a holistic adaptive system that constantly interacts with the environment internally and externally (Phillips, 2010).The human being is viewed as a biophysicosocial being (Roy, 1999). According to Roy, adaptation is a process and outcome where individuals use conscious awareness and choice to create human and environmental integrations (Roy, 1999).This Model of Adaptation concentrates on adaptation leading to excellent health, well-being, and a dignified death (Roy, 1999).

Roy’s Model has three concepts, the human being, adaptation, and nursing (Ross, 1990). The person is viewed as continually interacting with the environment with the goal being adaptation (Ross, 1990). Roy describes the human as a whole with parts that function as a unit (Roy, 1999). The environment refers to all conditions, circumstances, and influences that affect the development of a person (Roy, 1999). Some factors that influence the development of a person are family, education, religious background, mentors, and clinical experiences (Ross, 1990).

Health and nursing are important to adaptation. Health is a process or state of being and becoming an integrated whole (Roy, 1999). Adaption and nursing occurs by nurses having the goal of promoting adaptation for individuals (Roy, 1999).

The self-concept mode is the need for psychic integrity (Ross, 1990). A person’s perception of their physical self and personal self are included in this mode (Ross, 1990). Roy describes this as being the need to know who one is, so they can exist with a sense of unity (Roy, 1999).

The role function mode is the roles of a person in society (Ross, 1990). This is how a person adapts to different roles throughout their lifetime (Ross, 1990). Since roles change during a person’s life this mode is continually being used (Ross, 1990).

The Adaptation Model can be used in other ways and not only healthcare. The television show that I choose to apply this model to is Little House on the Prairie. All throughout the series the characters are continuously adapting to maintain their health and ability to live comfortably. The character of Mary is the best example of Roy’s model.

Mary’s regulator mechanism was in use when she first became blind. She was sweaty, difficulty breathing and portrayed being nervous. The cognator mechanism was the emotions she had about the situation. Mary was scared and crying a lot during this time. Her two subsystems were internally processing that she was blind.

The stimuli that affected her ability to cope were all three forms of environmental stimuli. The focal stimuli were her immediate need to be able to function without seeing. The contextual stimuli were how others were trying to help her. The residual stimuli were the feeling Mary had about the situation. At first Mary was scared but eventually adapted and overcome being frightened.

Mary’s situation began in the physiologic mode. Her first concerns were how she looked and how she would be able to walk around or feed herself. She then adapted through the self-concept mode. Mary at first had seen herself as useless and as worthless but overcome these thoughts. Mary adapted in the role function mode by realizing that she may not be able to teach children who could see but she could teach those who are blind. By learning to take care of herself and not depending on others, she adapted through the interdependence mode.

Roy’s Adaptation Model’s best feature is that it describes and provides evidence how a person adapts to situations can affect their health. The model displays how the environment can affect a person’s ability to cope. The model is also useful in helping nurses discover the main cause of a person’s lack of adaptation and how to help them achieve adaptations. This makes for more caring nurses and better patient relationships.

The model does lack in describing on what if the patient does not adapt and what to do next. There is no explanation of situations or mechanisms if the person does not overcome their situation. The model does not have a concept of not being able to achieve adaptation. There is no process for someone who is at a standstill, other than promoting adaptation. This may not work if the person cannot cope with the situation.

Roy’s Adaptation Model is widely used in many nursing schools and by nurses because of the model views a person as holistic and contributes to the knowledge of nursing (Fawcett, 2005). 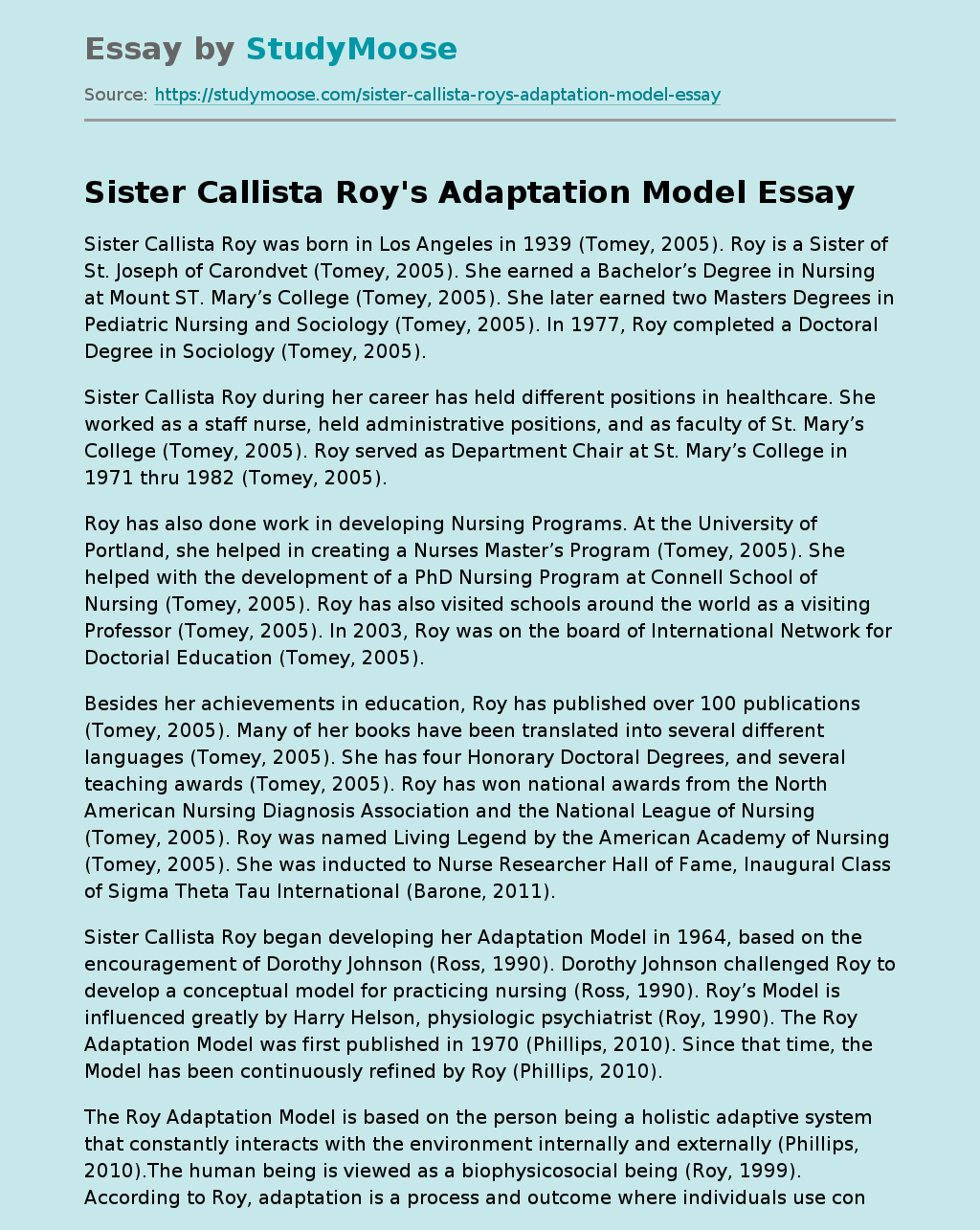