Throughout the poem of Sir Gawain and The Green Knight, Sir Gawain is approached by the hosts’ wife, as she challenges the value he has placed on his courtesy and chastity. The Lady imposes her sexual desires with Sir Gawain in the three bedroom scenes throughout the play. The Lady challenges Sir Gawain’s politeness as he refuses to engage in any sexual activity with her, which ultimately challenges his courteous; as, the Lady holds higher rankings in comparison to a knight.

Don't use plagiarized sources. Get your custom essay on
“ Sir Gawain and The Green Knight, Middle Age Kissing ”
Get custom paper
NEW! smart matching with writer

Kissing during the middle ages, served a variety of purposes in an array of settings. The senses of touching and kissing was held in high regard, as often it represented the power of an object or individual that was being touched. (Aslina, 41) However, kissing during the middle ages were viewed very differently, dependent on if one viewed themselves as a Christian or not. Christians were ashamed with the sexual connotations that kissing had attached itself to, which ultimately transferred the action of kissing to everyday associations.

For example, kissing an individual to greet, celebrate or reunite. As stated by Michael Philip Penn, these types of kisses were often exchanged with “peers, political leaders, teachers, rabbis and priests” (Penn, 13).

Additionally, it was not just the opposite sex’s that exchanged kisses during the middle ages, as there are many accounts that state that male friends kissed and female friends kissed one another; this was purely used for greeting and departing (Penn, 41). Therefore, Christians attempted to dismantle the presumptions created within societies that kissing was exchanged for purely sexual desires, as it could serve several other meaningful purposes. One can assume that Christians held kissing in very high regard and that it demonstrated mutual respect and appreciation. Therefore, if one was to refuse to exchange a kiss, there would have been a substantial amount of disapproval, due to its insulting nature. Moreover, Michael Philip Penn claimed that “Early Christians also used the implications of refusing a kiss to help fashion the ritual kiss into a rite of exclusion” (Penn, 14 ). Therefore, Christians took offence to any form of rejection when one tried to exchange a kiss, which would eventually led to exclusion. Evidently, the research conducted regarding the meaning of kissing in the middle ages, suggests that the wife of the host (in the poem Sir Gawain and The Green Knight) would have felt extremely insulted because Sir Gawain refused to engage in sexual interactions and because he was of a lower ranking. 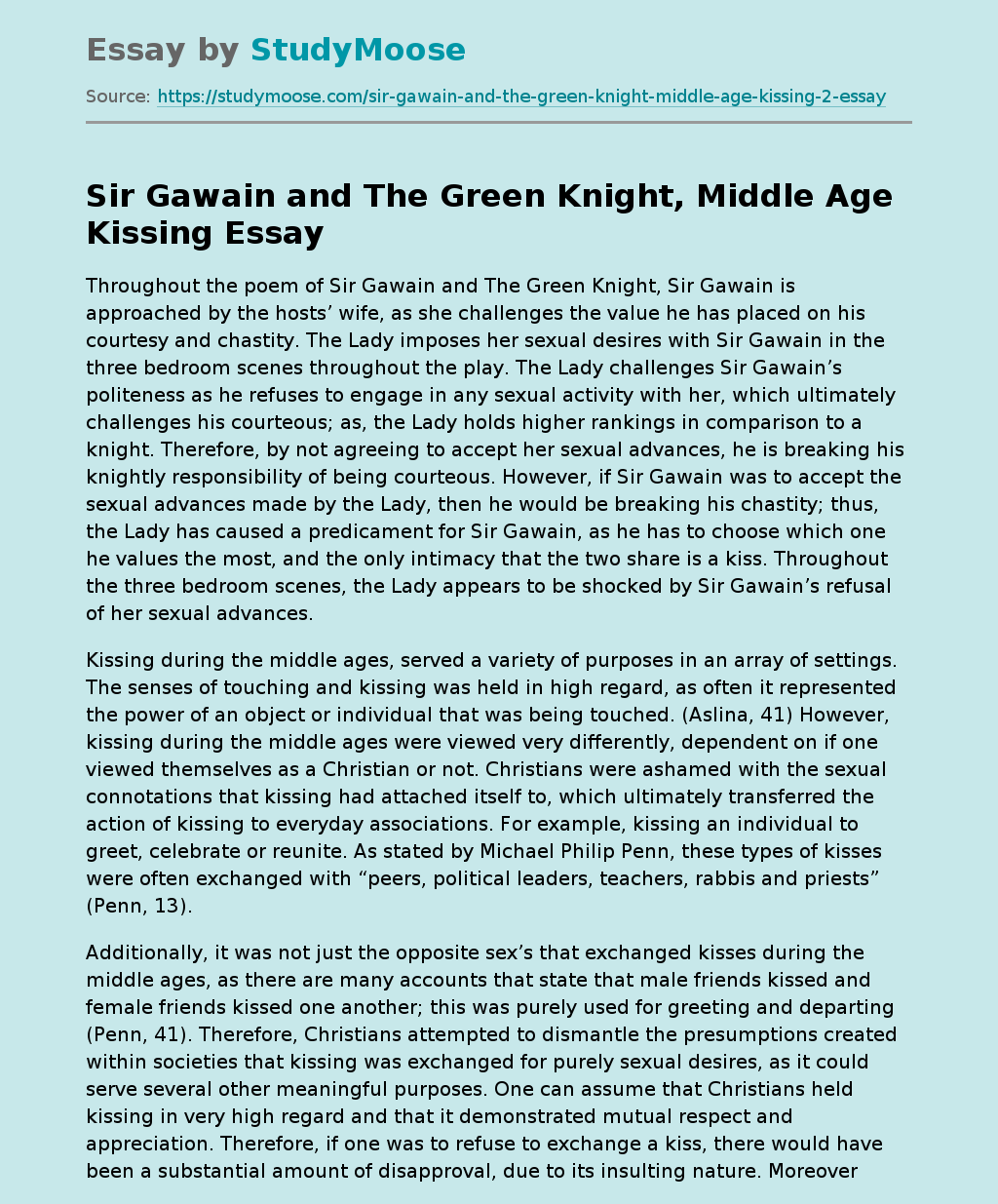